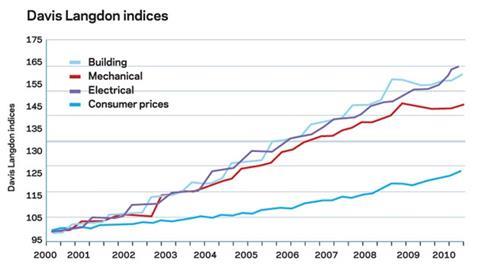 Price adjustment formulae indices, compiled by the business and innovation department, are designed for the calculation of increased costs on fluctuating or variation-of-price contracts. They provide useful guidance on cost changes in trades and industry sectors and on the differential movement of work sections in Spon’s Price Books.
Over the 12 months between August 2009 and August 2010, the 60 building work categories have recorded an average rise of 5.3%, continuing the upward trend of the past three quarters. 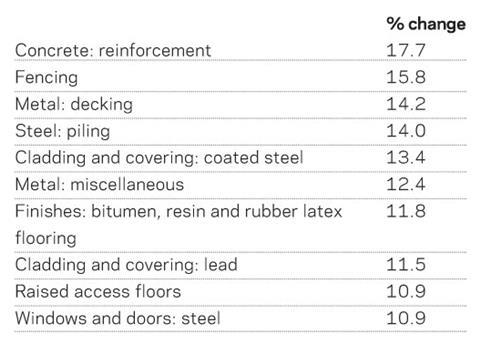 The results in these two categories reflect a drop in aggregates and cement prices over the past year.

Building and civil engineering operatives
Building and civil engineering operatives employed under the Construction Industry Joint Council Working Rule Agreement have had their rates of pay frozen for the second successive year and are having to operate on wage rates that came into effect in June 2008. These rates are in force “until further notice”. However fare and subsistence allowances did increase from 28 June 2010.

Operatives working under the auspices of the Building and Allied Trades Joint Industrial Council, generally for smaller companies who are members of the Federation of Master Builders, will receive a 2% increase in basic rates of pay from 13 September. The new hourly rates will become:
S/NVQ3 Advanced Craft £10.62 (previously £10.41)
S/NVQ2 Intermediate Craft £9.13 (previously £8.95)
Adult General Operative £7.88 (previously £7.73)
These rates will be applicable from 13 September 2010 to 12 June 2011.

They provide an underlying indication of price changes and differential movements in the work sectors, but do not reflect changes in market conditions affecting profit and overheads provisions, site wage rates, bonuses or materials’ price discounts/premiums.

In the current market, most costs recorded here are rising but prices charged to some clients are still falling. Market conditions are recorded in Davis Langdon’s quarterly market forecast (last published 23 July).