The rate of annual change at Q2 2015 eased to 1.5%. Labour cost inflation contributed most of the annual increase.

The electrical cost index increased by 2.0% over the year, despite large falls in many input costs for metals commodities. 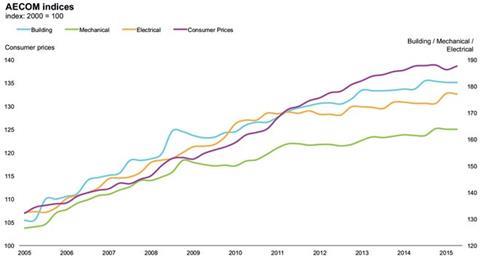 They are intended to provide an underlying indication of price changes and differential movements in the various work sectors but do not reflect changes in market conditions affecting profit and overheads provisions, site wage rates, bonuses or materials’ price discounts/premiums. Market conditions and commentary are outlined in Aecom’s quarterly Market Forecast (last published April 2015).

Price Adjustment Formulae indices, compiled by the Building Cost Information Service are designed for the calculation of increased costs on fluctuating or variation of price contracts. They provide guidance on cost changes in various trades and industry sectors – for isntance, those including labour, plant and materials – and on the movement of work sections in Spon’s price books.

The 60 building work categories saw an average decrease of 0.25% on a yearly basis. Higher rates of change were seen in the following categories:

The annual rate of consumer price inflation recorded 0.1% annual change in July 2015. Forecasts for CPI remain below 1% for the foreseeable future.

The pace of price deflation increased to -12.6% in June 2015. This continues a trend of slowing or falling input prices since autumn 2011. Core input inflation, which excludes volatile items, posted -4.0% over the year. Crude oil was the overwhelming contributor towards the annual change in input prices.

Factory gate prices continued to decline in June 2015 on a yearly basis, but the rate of price falls slowed from -1.6% in May 2015. Factory gate inflation has been declining since autumn 2011. The core index, which is narrower because it excludes items such as petroleum and food, maintained its recent rate of change, increasing 0.1% in the year to June. 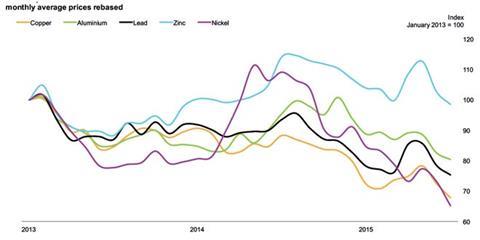 The rout of commodity prices continued through Q2 2015. In the last 12 months, prices of all headline metals commodities fell – anywhere between 14% and 45% – with many hitting four-year lows. Copper is down over 25% since July last year and nickel by more than 43%. The iron ore drubbing also continues, as does that of oil, both down by 51% and 48% respectively over the year. Aggregated gauges of commodities posted 13-year lows in August.

China is playing a key role in the commodities story because of its size as the world’s biggest consumer of commodities. Significant changes to its demand for commodities, combined with general oversupply and a slower global economy, have forced prices lower. Futures contracts also indicate weak prospects for commodities price levels, with expected future US dollar strength, above-trend rates of metals supply and slowing global economic growth all playing a part in this outlook.

Following sterling’s pause of its long appreciation against the euro in Q1 2015, some upward momentum was regained towards the end of Q2 2015. The Greek drama played a part in weakening the euro against sterling, along with general uncertainties about the economy in Europe.

The US dollar weakened further against sterling over the course of Q2 2015. Sterling recovered some ground against the US dollar though, before sterling posted slightly weaker numbers very recently as the Bank of England indicated a dovish tone with respect to the timing of bank rate increases.

Recent devaluation to the Chinese Yuan also led to speculation about the relative strength of the Chinese economy, which in turn affected emerging market currencies and commodities. The near 2% adjustment led to its largest one-day change in a decade. The US dollar is likely to appreciate further, which will focus attention on emerging market currencies and the strength – or otherwise – of their respective economies.

The parties to the Construction Industry Joint Council agreed a pay deal which saw pay rates increase by 3% from 30 June 2014, and a further 3% rise from 29 June 2015. Travel and fare allowances also increased from 30 June 2014, along with subsistence allowances increasing to £35 a night from 6 January 2015. The agreement also addresses changes to sick pay.