Materials cost inflation continues to rise, although the effects of sterling’s weakness are filtering out slightly and the increase in input costs has slowed. Michael Hubbard of Aecom reports

Building cost index
A composite measure of building costs increased over the past 12 months by 3.9% at Q2 2017. Materials cost inflation continues to increase, as do labour rates. Inflation arising from higher imported materials costs still plays a part in the reasoning, but the effect of sterling weakness is working its way through and out of the system for the time being. This may well increase once again, as the pound has fallen against the euro recently.

Mechanical cost index
The rate of annual change increased to 3.9% at Q2 2017. Both labour and materials components of the index increased, with the latter almost reaching 6% over the period.

Consumer prices index
Consumer price inflation maintained a steady rate through the second quarter of 2017. The largest fall was recorded in motor fuel, but this was offset by increases in a range of other domestic goods and services. 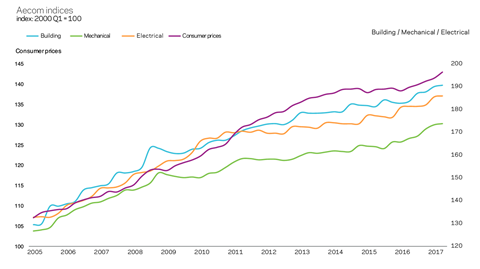 The 60 building work categories recorded an average increase of 1.6% on a yearly basis. Higher increases were recorded in the following categories:

Input costs increased by 6.5% on a yearly basis to July 2017 – a notable slowing in the annual rate of change when compared with change in the preceding months of 2017, decreasing by 13.4% from a peak of 19.9% in January. Further consolation is found in the July figure as it records the slowest rate of annual change since July 2016 at 4.2%, while the monthly movement of 3.5% from June 2017 is the largest downward shift since April 2012. Moderate strengthening of sterling and a fall in crude oil by about 12% over H1 2017 are two reasons there is a slower rate of inflation for materials and fuels inputs.

Factory gate prices increased 3.2% on a yearly basis in July. Falling input costs in recent months have contributed in part to a slower rate of overall output price growth. As recent large rises in input costs have eased a little, output prices have continued to increase steadily, offering some respite for producers in managing the balance between input cost pressure and output prices. However, the rate of change in output price inflation has slowed through 2017. 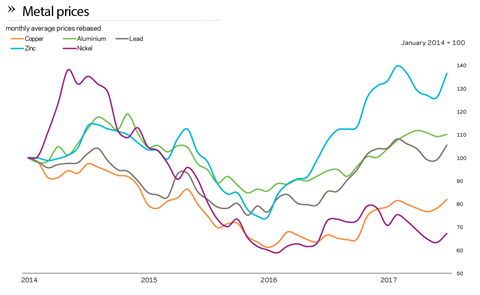 Commodity prices mainly continued to make gains through the second quarter of 2017. This follows downward drift in prices through the preceding quarter. Prices are therefore at similar levels to those seen at the turn of the year. Global economic growth expectations are perceived to be improving, with corresponding knock-on effects on demand for metals commodities. 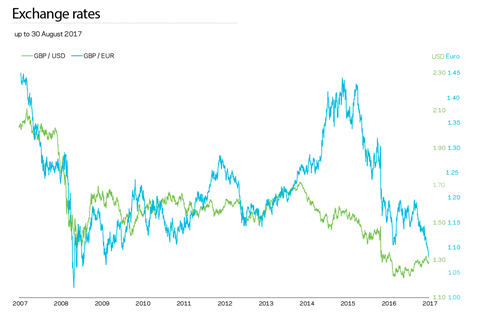 Having followed broadly similar trends against the euro and the US dollar, sterling again lost ground against the euro during Q2 2017. It sank further more recently as eurozone economic confidence and performance beat the UK’s economic story,

and the situation is not helped by ongoing Brexit uncertainty weighing on the outlook. Against the US dollar, sterling’s performance is better, but this reflects changing views about the US economic landscape and political developments.

Following negotiations between the parties to CIJC, the council has agreed a two-year agreement on pay and other conditions. This is the second phase of a two-year agreement reached in June 2016. Hourly pay rates will increase by 2.75% in June 2017. Industry sick pay and subsistence allowance will also increase in line with the basic pay rate increases. Workers will receive an extra day’s holiday from 1 January 2017, which is worth an additional 0.4%. For more details on apprentice rates, daily fare and travelling allowance and other rates, refer to CIJC document IR.2016.19.

A two-phase agreement has been agreed between BESA and Unite trade unions. Phase one comprises 2.0% and 2.5% increases in hourly wage rate effective from 3 October 2016 and 2 October 2017 respectively. Phase two, covering the periods 2018/2019 and 2019/2020, involves increases in index and other benefits agreed in July 2016. Introduction of calculating daily fare and travel allowances has been changed from kilometres to miles. Workers’ annual holiday is to increase from 23 to 24 days, effective from February 2020. For more information on the agreement, refer to JCC letter 117 of BESA.

This is the second phase of the agreement finalised in 2015. Rates for workers in the JIB-PMES industry increased by 2%, effective from 2 January 2017.

The SNIJIB has reached on a two-year wage deal effective from 3 July 2017. Hourly wage increases of 2% in 2017 and 2018 have been agreed. For more information, refer to SNIJIB wage agreement document – July 2017.

They are intended to provide an underlying indication of price changes and differential movements in the various work sectors but do not reflect changes in market conditions affecting profit and overheads provisions, site wage rates, bonuses or materials’ price discounts/premiums. Market conditions and commentary are outlined in Aecom’s quarterly Market Forecast (last published August 2017).