Never a dull moment: average earnings have improved but inflation is still at a 15-year high, and industrial relations remain tense. Peter Fordham of Davis Langdon, an Aecom company, reports

The chart below shows how Davis Langdon’s index series, reflecting cost movements in different sectors of the construction industry, have fared since 2000, with the movement of the Consumer Prices Index for comparison. 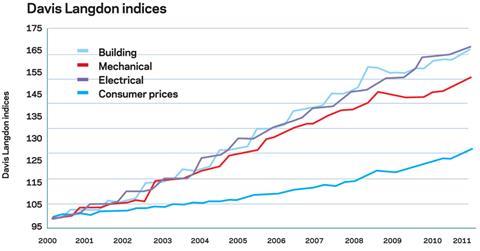 Year-on-year change remains below long-term average but the first wage award for two years nudges the index up.

The mechanical cost index stays flat in the third quarter.

The electrical cost index fell in the third quarter 2011 for the first time since 2005.

Price adjustment formulae indices, compiled by the Building Cost Information Service (previously by the Department for Business, Innovation and Skills), are designed for the calculation of increased costs on fluctuating or variation of price contracts. They provide useful guidance on cost changes in various trades and industry sectors and on the differential movement of work sections in Spon’s Price Books.

Over the last 12 months, between October 2010 and October 2011, the 60 building work categories have recorded an average rise of 5.2%, a further increase from 4.6% three months ago.

The works categories showing the largest increases over the last 12 months have been:

Copper pipework is the only work category to show a price decrease.

MATERIALS: Consumer prices peak and industry prices and costs have started to drop

Annual CPI inflation rose to 5.2% in September, its highest ever level since the series began in 1996. October’s ease to 5% may be the start of the fall back to the government’s target of 2%, forecast by the Bank of England by the middle of 2012.

Materials and fuels purchased by manufacturing industry -1.7 +14.1
Materials and fuels purchased by manufacturing industry excluding food, beverages, tobacco and petroleum industries (FBT&P) +0.8 +10.5
Industry’s input costs surged between September 2010 and April 2011 in response to higher oil and other commodity prices. Since April, prices have been generally steady and the headline measure actually shows a slight fall over the last six months, mainly reflecting price falls in crude oil and imported metals.

Industry output prices have risen only 1% over the last six months despite the sharp rise in input costs that occurred over the previous six months.

Over the year, petroleum (+15%) and food products (+9%) saw the largest increase in output prices.

Metal prices have fallen significantly over the last six months in response to the weakening global economy and are now all lower than a year ago.

Materials price increases for the construction industry over the last year and half-year are detailed below:

Materials showing the most significant price variation from the average changes over the last six and 12-month periods are shown below. Materials are manufactured in the UK unless stated otherwise.

LABOUR: Average earnings in construction rose by 2.1%, with a 2.3% rise nationally

The current wage rates for heating and ventilating operatives have been in force since October 2010. It is understood that no negotiations are currently under way to review these rates.

Industrial relations in the mechanical and electrical services sectors are currently in disarray because of BESNA, the Building Engineering Services National Agreement, being promoted by the Heating and Ventilating Contractors’ Association (HVCA) in conjunction with some of the largest services contractors. Unite has come out against the proposal and won’t negotiate with either the HVCA or the ECA.

The proposed agreement has been developed by the HVCA to harmonise pay and terms and conditions of employment for mechanical, electrical and plumbing workers. The argument for the introduction of the new agreement is the evolution of modern installation methods with increased overlap between disciplines and the need for multi-skilled teams. Unite interprets the move as an attempt to cut rates of pay by putting semi-skilled workers into skilled jobs, to reduce costs.

Seven of the largest mechanical and electrical services contractors including NG Bailey, Balfour Beatty Engineering Services and T Clarke are currently in consultation with their workforces with a view to signing up to the new agreement on 7 December 2011 with the agreement set to come into force from 1 March 2012.

Date of next review