Building costs rose overall, with materials cost inflation increasingly contributing to this - labour costs are rising too but at a lower rate. David Holmes of Aecom reports

A composite measure of building costs increased over the past 12 months by 2% at Q3 2016. Labour costs are still rising albeit at a slightly lower rate, and materials cost inflation is now increasing its contribution to the overall increase.

The rate of annual change increased to 3.4% at Q3 2016 from 2.2% in the preceding quarter. Labour costs remain the primary driver of inflationary trends in this index with materials once again showing upward movement. 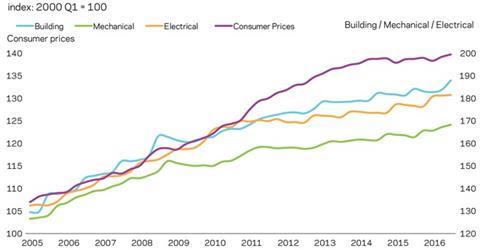 The electrical cost index increased by 2.7% over the year. Rises in labour costs are still the main driver with materials showing early signs of increasing in more recent months.

Consumer price inflation picked up slightly in Q3 2016, recording 0.9% annual change. The rate was slightly lower in September 2016, but still remained higher than the rates otherwise seen since 2014.

Price adjustment formulae indices, compiled by the Building Cost Information Service (previously by the Department for Business Innovation & Skills), are designed for the calculation of increased costs on fluctuating or variation of price contracts. They provide guidance on cost changes in various trades and industry sectors and on the differential movement of work sections in Spon’s price books.

The 60 building work categories recorded an average increase of 2.8% on a yearly basis; 57 of the 60 categories showed an increase. Highest rises were recorded in the following categories:

Only two trades have shown a decrease for the period:

The All Work material price index increased by 1.3% in the year to September 2016, although the index decreased by 0.7% compared with August. Housing-related materials increased by 1.9% over the past 12 months. Non-housing materials prices also show a small increase over the year, increasing by 0.6%. All mechanical and electrical categories posted small annual increases.

Note: the numbers in the table above do not include mechanical or electrical materials

Consumer price inflation rose by 0.9% in October compared with 1% in September. Transport prices provided downward pressure during 2015 and early 2016 but have now become the largest upward pressure on inflation. Bank of England governor Mark Carney has stated recently that he is willing to see inflation overshoot to help keep the UK economy from stalling.

The total input price index increased 4.6% between September and October, the largest monthly increase since comparable records began to be collated by the ONS. The upward drivers to the index came from crude oil, other imported parts and equipment and metals.

Factory gate inflation rose 2.1% in the year to October 2016, compared with a rise of 1.3% in the year to September. This is the fourth consecutive increase following two years of falling prices and the largest increase since April 2012. 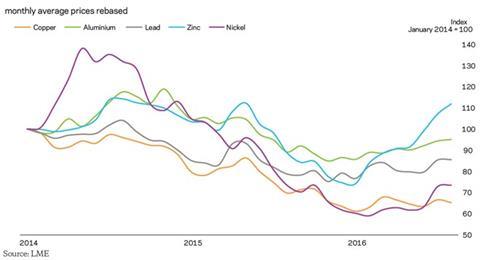 Commodities price trends continue to show signs of life with a reversal of the long-established downward trend of the past two years. Apparent efforts to address production overcapacity with mine closures in a number of countries and production cuts have provided support to prices, along with some improvement in aggregate demand. 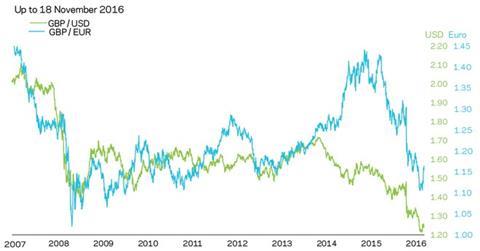 The pound fell after the referendum, then stabilised before falling again in October on fears that the UK was heading for a hard Brexit. This month, the pound has been buoyed by some upbeat economic news and UK government announcements that it is targeting a soft Brexit.

Following negotiations between the parties to CIJC, the council has agreed a two-year agreement on pay and other conditions. Hourly pay rates will increase by 2.5% from 25 July 2016 and then by a further 2.75% in June 2017. Industry sick pay and subsistence allowance will also increase in line with the basic pay rate increases. Workers will receive an extra day’s holiday from 1 January 2017, which is worth an additional 0.4%. For more details on apprentice rates, daily fare and travelling allowance and other rates, refer to CIJC document IR.2016.19.

A two-phase agreement has been agreed between BESA and Unite trade unions. Phase 1 includes 2.0% and 2.50% increases in the hourly wage rate effective from 3 October 2016 and 2 October 2017 respectively. Phase 2 covers the periods 2018-19 and 2019-20 involving increases in index and other benefits agreed in July 2016. 2018 and 2019 hourly wage rate discussions will take place towards the end of 2016. Introduction of calculating daily fare and travel allowances has been changed from kilometres to miles. Workers’ annual holiday entitlement is to increase from 23 to 24 days effective from February 2020. For more information on agreement, refer to JCC letter 117 of BESA.

The Building and Allied Trades Joint Industrial Council (BATJIC) agreed a two-year pay deal effective from 27th June 2016. Workers will receive a 2.5% pay rise this year and a further 2.5% increase in 2017.

Lower paid operatives will get a bigger boost of 4% this year, followed by 2.5% next year. The agreement includes a commitment that, if inflation in early 2017 is higher than 2.5%, then the 2017 pay rise will match this up to a limit of 3%.

A 2.5% increase in hourly rates came into effect from 4 January 2016. Employee rates of pay, allowances entitlements and benefits are published in promulgation no 171 of JIB for Plumbing, Mechanical Engineering Services in England and Wales agreement.

They are intended to provide an underlying indication of price changes and differential movements in the various work sectors but do not reflect changes in market conditions affecting profit and overheads provisions, site wage rates, bonuses or materials’ price discounts/premiums. Market conditions and commentary are outlined in Aecom’ s quarterly Market Forecast (last published November 2016).