Price pressures continue to be caused by weak productivity aggravated by Brexit negotiations, while exchange rates improved as the Bank of England prepared to raise interest rates. David Holmes of Aecom reports

Building cost index
A composite measure of building costs increased over the past 12 months by 3.9% at Q3 2017. Materials cost inflation continues to increase, as do labour rates. Inflation arising from higher imported materials costs due to the sterling valuation against the euro will continue to be a focus for projects with currency-linked packages such as curtain walling.

Mechanical cost index
The rate of annual change increased to 3.4% at Q3 2017. Both labour and materials components of the index show increases.

Consumer prices index
Consumer price inflation maintained a steady rate through the third quarter of 2017. The largest fall was recorded in motor fuel but this was offset by increases in a range of food and recreational goods. 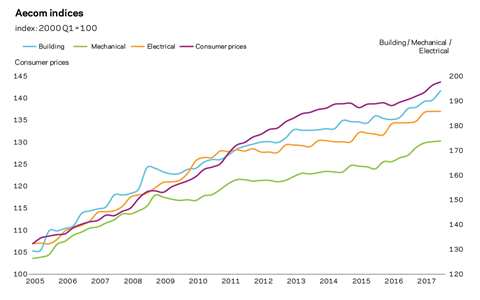 The 60 building work categories recorded an average increase of 4.5% on a yearly basis. The six highest increases were recorded in the following categories:

No items recorded a yearly decline. The six lowest increases were in the following categories:

Consumer price inflation rose in the 12 months to October by 3%, the highest since April 2012, helping to bring on a Bank of England interest rate rise. Continued increase of raw materials costs are set to feed into the supply chain and subsequent consumer prices, which could affect input cost inflation over the next period. Recreation prices rose sharply along with non-seasonal food prices. Underlying price pressures are not as a result of stronger demand but from weak productivity aggravated by ongoing Brexit negotiations.

Input costs increased by 4.6% on a yearly basis up to October 2017, down from 8.1% in September 2017. The largest single upward contribution came from crude oil, which contributed 1.5%, driven mainly by an annual increase of 10.6% in prices for imported crude petroleum and natural gas.

Factory gate prices increased by 2.8% on a yearly basis to October, down from 3.3% in September 2017. As recent large rises in input costs have eased a little, output prices continued to increase steadily. This offers some respite for producers in managing the balance between input cost pressure and output prices. However, the rate of change in output price inflation has slowed through 2017. 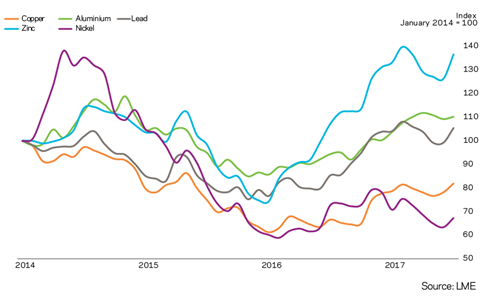 Commodity prices show an increase in excess of 22% this year, according to the World Bank in its October Commodity Markets Outlook. The actual impact of commodity prices on the price of the manufactured item is usually quite limited, depending on the value of the commodity as part of the final product. The metals index is expected to stabilise next year as a correction in iron ore prices is offset by increases in other base metals. 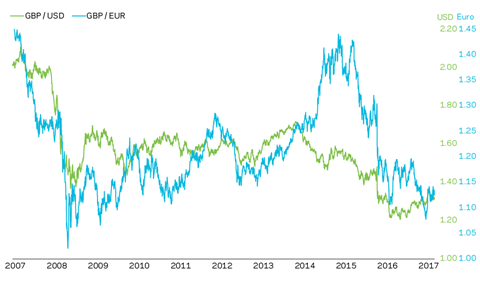 The pound has been rising against all other currencies as investors looked at the possibility of the Bank of England raising interest rates. Since the announcement of the first interest rate rise in a decade, to 0.5%, exchange rates have reverted to their more recent trends.

US dollar and euro exchange rates enjoy quite a close correlation – if the euro is stronger it will typically push the dollar down across most currencies. Against the US dollar, sterling’s performance is better but this also reflects the changing views about the US economic landscape and proposed tax reforms by reductions in corporate tax rate.

Following negotiations between the parties to CIJC, the council has agreed a two-year agreement on pay and other conditions. This is the second phase of a two-year agreement reached in June 2016. Hourly pay rates increased by 2.75% in June 2017. Industry sick pay and subsistence allowance increased in line with the basic pay rate increases. Workers have received an extra day’s holiday since 1 January 2017, which is worth an additional 0.4%. For more details on apprentice rates, daily fare and travelling allowance and other rates refer to CIJC document IR.2016.19.

A two-phase agreement has been agreed between BESA and Unite trade unions. Phase 1: A 2% and 2.5% increases in hourly wage rate effective from 3 October 2016 and 2 October 2017 respectively. Phase 2: Covering period 2018/2019 and 2019/2020 involving increases in index and other benefits agreed in July 2016. Introduction of calculating daily fare and travel allowances has been changed from kilometres to miles. Workers annual holiday to increase from 23 to 24 days effective from February 2020. For more information on agreement, refer to JCC letter 117 of BESA.

The SNIJIB reached a two-year wage deal effective from 3 July 2017. An hourly wage increase of 2% in 2017 and 2018 respectively was agreed. For more information, refer to SNIJIB wage agreement document – July 2017.

The BATJIC rates of wages effective from 26 June 2017 are:

They are intended to provide an underlying indication of price changes and differential movements in the various work sectors but do not reflect changes in market conditions affecting profit and overheads provisions, site wage rates, bonuses or materials’ price discounts/premiums. Market conditions and commentary are outlined in Aecom’s quarterly Market Forecast (last published November 2017).