A composite measure of building costs increased by 5.0% over the previous 12 months. Both labour and materials costs pushed higher, which maintains inflationary pressures for input costs. The prolonged weakness in sterling against the euro and the dollar has propelled the cost of imported materials and components, particularly with dollar-priced commodities. General underlying construction industry demand also supports the cost trends.

The mechanical cost index rose 4.1% in the year to Q3 2018 – a marginal fall from 4.4% in Q2 2018. The labour and materials index components rose further over the year, but these inflationary pressures are easing slightly.

Aecom’s electrical cost index increased by 3.6% over the year to Q3 2018. Global metals commodity price rises are beginning to fade, but this has not yet fed through into the index’s latest readings because of the lagged effect as higher costs work their way through the whole supply chain.

Consumer price inflation moved down towards its target of 2% when it posted 2.4% annual change in September. Fuel costs rose while recreational and leisure components of the index slowed or fell from previous levels. 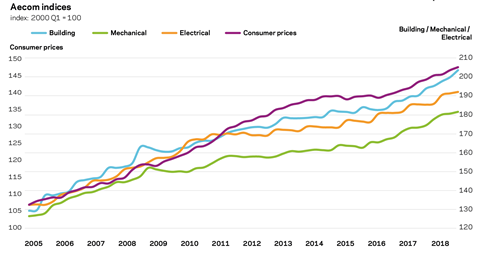 Price adjustment formulae indices, compiled by the Building Cost Information Service (previously by the Department for Business, Energy and Industrial Strategy), are designed for the calculation of increased costs on fluctuating or variation of price contracts. They provide guidance on cost changes in various trades and industry sectors – those including labour, plant and materials – and on the differential movement of work sections in Spon’s price books. The 60 building work categories recorded an average increase of 4.3% on a yearly basis. The six highest increases were recorded in the following categories:

No single category recorded a yearly decline; the lowest yearly increases were observed in the following categories:

The BEIS All-work materials price index increased by 5.4% in the 12 months to September 2018. Housing-related materials increased by 5.0% over the same period; non-housing prices rose by 5.3% annually. All M&E categories continue to post significant yearly increases.

Consumer price inflation including owner occupiers’ housing costs was 2.2% in the 12 months to September 2018. The headline rate of inflation was 2.4% over the same period, marking a reversal after the spike of 2.7% in August. Many household, recreation and food items recorded slower rates of change.

Input costs increased by 10.3% on a yearly basis up to September 2018. This reflects a pick up in the rate of change on a monthly and yearly basis. The yearly rate of inflation has remained positive since the middle of 2016. Crude oil was the largest single contributor to the 12-month change, up by 38% over the period, although this is a slower rate than the 41% posted in August.

Factory gate prices increased by 3.1% on a yearly basis to September. Similar to input prices, output price inflation has remained positive since July 2016. Again, the largest upward contribution to the annual rate was from petroleum products, which increased by 13.5% on the year to September 2018.

This 12-month rate of change is below the corresponding trend for input costs and will be causing commercial pressures across UK supply chains, as selling prices do not keep pace with input cost inflation. 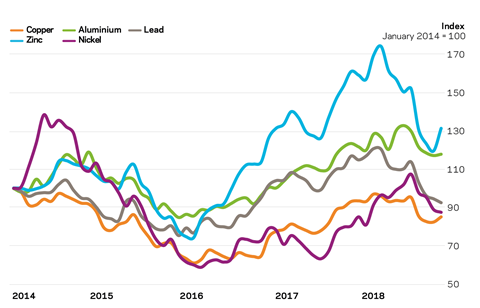 Commodity prices rallied a little during Q3 2018 but most are still some way off their 52-week highs. Commodities have been buffeted by a slew of global issues through 2018: a stronger dollar, rising US interest rates, weaker economic data for China and increasing tension in global trade relations generally. Many commodities are priced in dollars, which affects global demand due to the comparatively higher price. Higher US interest rates push up storage costs for commodities too, while trade tensions and tariffs have conspired to crimp global demand. 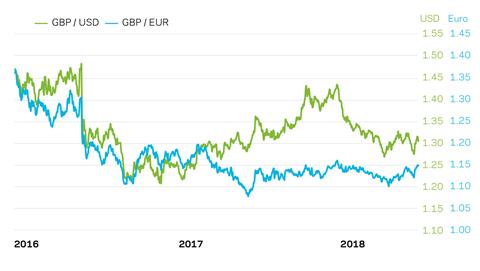 Sterling gained some ground against the US dollar and the euro during Q3 2018. Market reactions to Brexit-related news often cause some initial movement in sterling. Nevertheless, broader trends have played out for sterling which reflect the UK’s comparative economic conditions against these two major currency pairs. Some of the Q3 rally against the euro was down to the prospect of some form of Brexit deal, but this was quickly unwound as the proposed deal seemed unlikely to be accepted. Against the US dollar, sterling fared less well in Q3, primarily due to US interest rates making successive increases, and this resulting in the US dollar being on the whole a more attractive currency holding. Irrespective of the currency pairing, sterling will see ongoing volatility into 2019.

They are intended to provide an underlying indication of price changes and differential movements in the various work sectors but do not reflect changes in market conditions affecting profit and overheads provisions, site wage rates, bonuses or materials’ price discounts/premiums. Market conditions and commentary are outlined in Aecom’s quarterly market forecast (last published November 2018).