This composite measure of building costs increased by 4.2% over the 12 months to Q4 2017. Materials cost inflation increased noticeably over the period, resulting from a combination of sterling depreciation and new year price increases. Labour costs continued to rise, although the pace of change slowed, reflecting some of the corresponding slowdown in overall construction output.

The rate of annual change rose to 4% in Q4 2017, thanks to increases in the labour and materials components. Higher imported materials costs due to sterling’s weakness against the euro continued to add pressures.

The increase of 2.3% over the year represented a slower rate than in the year to Q3 2017. However, momentum remains in the annual rate of change from a combination of demand and foreign exchange-related dynamics.

This maintained its elevated rate of change, driven by recreational and cultural goods and services, rather than items linked to industrial inputs. Consumer price inflation is expected to stay elevated through 2018.

The 60 building work categories recorded an average increase of 4.4% on a yearly basis. The six highest increases were recorded in the following categories:

Again, no items recorded a yearly decline. The six lowest increases were in the following categories:

Consumer price inflation including owner-occupiers’ housing costs was 2.7% in the 12 months to January 2018. This rate of change matched that recorded in December 2017. Underlying price pressures stemmed largely from sterling remaining lower for longer, in turn importing inflation into the UK economic system. On-going inflationary pressures will continue to feed into the raw materials costs used by supply chains – both in general economic sectors and specific to construction. Additionally, there will be sustained tension on real wages as consumer price inflation exceeds changes in wages and earnings.

Input costs increased by 4.7% on a yearly basis to January 2018. Although this is still an elevated rate of annual change, it does mark the lowest recorded value for 18 months and is down from 5.4% in December 2017. Again, the largest upward contribution came from crude oil, which contributed more than two percentage points, driven primarily by a 13% increase in imported crude petroleum and natural gas prices.

Factory gate prices increased by 2.8% on a yearly basis to January. While 2017 witnessed a gradual slowing in the rate of output price inflation for manufactured products, pressure remains for producers as input costs have not slowed to the same extent. The annual rate dropped by 0.5 percentage points between December 2017 and January 2018 as a result of downward contributions from eight industry sectors. 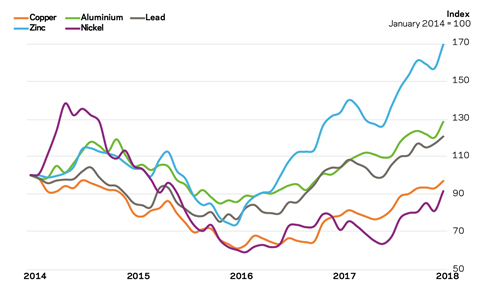 Commodity prices continued to rise on the back of higher demand from increased global economic activity. An average 24% increase over 2017 marks a significant rebound in the fortunes of commodity markets, with non-energy commodity prices recording seven consecutive months of rises.

Provided this global pick-up maintains its pace, metals commodity prices are likely to see further increases through the course of 2018. Tight supply for base metals such as zinc, nickel and lead is also expected to offer price support. But the imposition of import tariffs by the US on steel and aluminium may cast a shadow over the mechanics of global trade, particularly where retaliatory measures are implemented by many other countries. 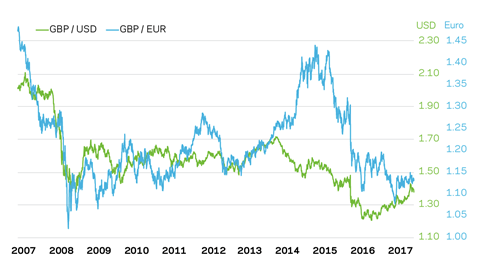 Sterling has continued to rally against the US dollar but less so against the euro. This weaker movement against the euro is partly due to the current and expected improvement in economic growth for the eurozone. Speculation around the prospect of interest rate increases in each respective economic area has also moved foreign exchange rates in recent months.

The recent high for sterling against the US dollar has waned, partly in response to on-going political and economic concerns around Brexit. Regulatory framework questions on the UK’s future trading arrangements also add to the uncertainty and weigh on sterling’s outlook.

They are intended to provide an underlying indication of price changes and differential movements in the various work sectors but do not reflect changes in market conditions affecting profit and overheads provisions, site wage rates, bonuses or materials’ price discounts/premiums. Market conditions and commentary are outlined in Aecom’s quarterly Market Forecast (last published February 2018).