Activity is increasing at its highest rate since May 2010, but bad weather and labour shortages are taking their toll, according to the latest figures from Experian Economics

After reaching the no-change mark of 50 in September, the construction activity index increased by three points to 53 in October, reaching its highest level since May 2010.

Across every sector the activity indices rose, which led to all indices reaching positive territory. The civil engineering index saw the greatest increase of nine points to 56. Meanwhile, the non-residential and residential sectors both saw their indices go up by two points, to 54 and 51 respectively.

On a sectoral basis, all three orders indices went up, however despite this move the residential index remained in negative territory as its index edged up by one point to 42. The index has now been below 50 in each month since May 2008. The strongest rise was in the civil engineering sector, where the index soared by 20 points to 60, while the non-residential index went up by six points to 59.

The percentage of respondents reporting no constraint on activity climbed to 26% in October, its highest level since July last year. However, more than half of firms, 51%, said insufficient demand was limiting business activity. Bad weather became more of a concern last month as it increased marginally to 3%. Labour shortages became an important factor restricting activity levels, as it edged up to 4%.

Despite the latest figures showing a rise of three points in the employment index, it remained in negative territory at 40 and has been since January 2008. Once again firms are indicating that they expect their employment levels to fall over the next three months. 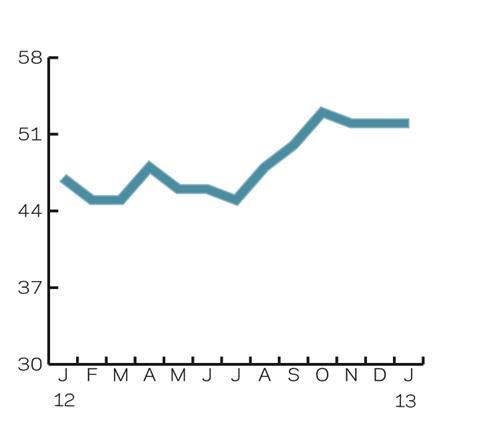 CFR’s Leading Construction Activity Indicator is predicted to edge down by one point in November, although it will remain in positive territory at 52. The two months thereafter will see the index unchanged at 52, signalling further increases in construction activity. The indicator uses a base level of 50: a figure above that level indicates an increase in activity; below that, a decrease. 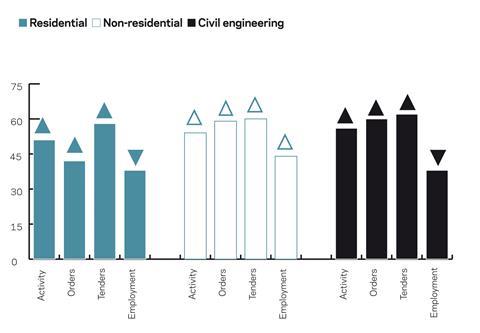 A third of building firms are continuing to experience falling labour costs, in line with the trends from a year ago, although the proportion
of firms reporting a decline has dropped from 40% in April. About 28% of firms reported an increase in labour costs of less than 2.5%, which is up from 12% three months ago. The percentage of firms reporting annual labour cost inflation between 2.6% and 5% fell markedly to 13% from 31% in July 2012.

About 33% of civil engineering firms reported a decrease in labour costs over the past year, down from two-thirds of businesses three months ago. However, whereas those reporting an increase in July all put the rise at between 2.6% and 5%, this had changed to less than 2.5% in October. 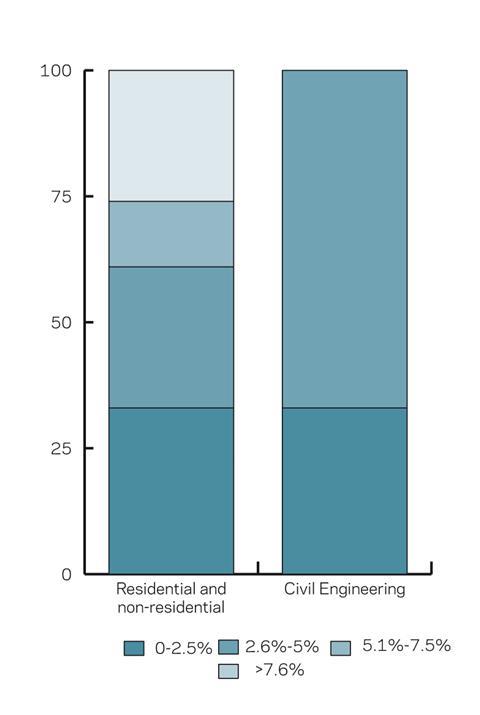 In October, only three of the 11 regions in the UK saw a rise in their index. Scotland saw the largest increase, as its index went up by five points to 49. Yorkshire & Humberside’s index improved by two points to 64 - the highest reading since December 2006. The North-west saw its index edge up by one point to 42.

Five regions saw a fall in their indices, with Northern Ireland experiencing the greatest decline as it dropped by four points to 41. West Midlands followed closely behind as its index decreased by three points to 43. The South-west and Wales both saw their indices go down by two points to 48 and 46 respectively. The North index had a marginal decline of one point to 40 - this is the lowest level since February 2009.

The East Midlands and South-east saw their indices remain unchanged at 49, while the East Anglia index also stayed the same at 44.

As a whole, the UK index, which includes firms working in five or more regions, saw its index edge up by one point to 53, its highest level since April this year.