The construction activity index slowed considerably in April, posting a decline of 11 points to 51. The repair and maintenance (R&M) activity index (53) posted a lesser decline of two points. All three sectors experienced a contraction last month, with the non-residential (49) and civil engineering (48) ones falling below the no change mark. The residential sector (52) managed to remain buoyant, although it was at its lowest level since last June.

At 65 points the orders index failed to achieve further growth in April, after reaching a long-term peak in March. Despite the fall, the index has now remained over 60 for 15 consecutive months. Meanwhile, tender enquiries were flat at 65 on the same measures.

Generally speaking, constraints to construction activity were more of an issue in April than they were a month earlier; accordingly, the percentage of respondents posting no restrictions fell by two percentage points to 32% in April. According to the panel, insufficient demand has remained the greatest hindrance to construction activity, although it has become less of a worry since March. Bad weather has done little to impede construction activity, unlike in the first two months of this year. Meanwhile anticipation of labour shortages has become less prominent, with only 11% of respondents highlighting it as an issue, when compared with 19% a month earlier. Financial constraints ticked up from March’s low, becoming more prominent in the process. There was little variation in the significance of material and equipment shortages.

The employment prospects index posted a positive figure of 53 points in April. This suggests that employers within the construction industry are likely to further expand their current workforce in the coming three months.

The overall tender price index gained strength in March, rising by 4 points to 68. 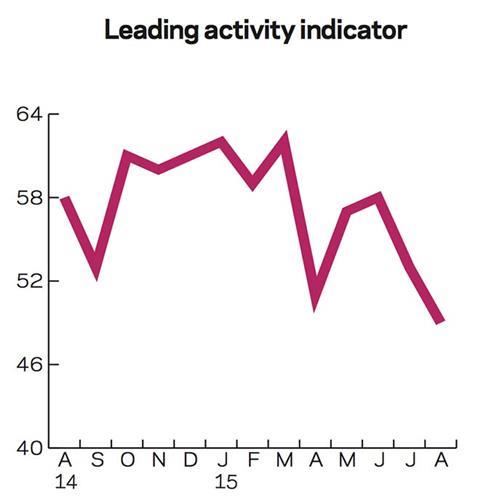 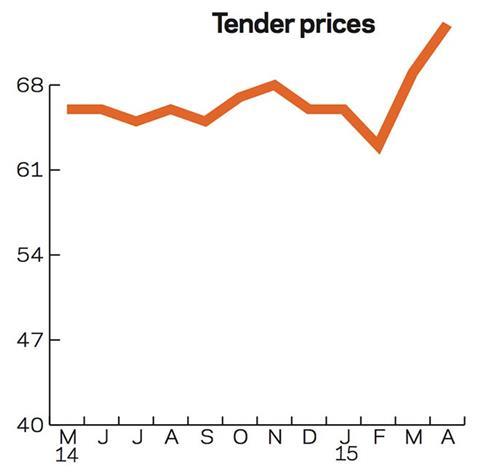 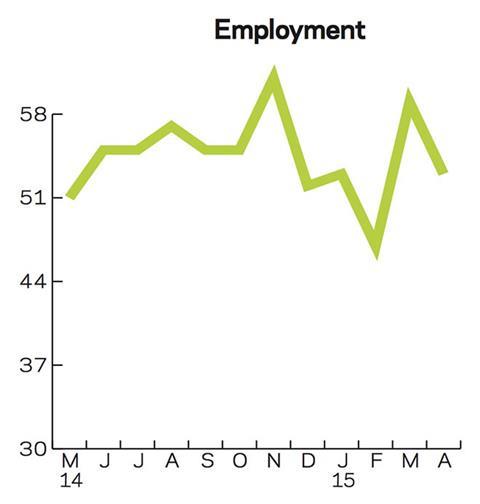 In April the CFR’s Leading Construction Activity Indicator contracted by 11 points on a monthly basis to reach 51. Despite remaining just above the no change mark, this is its weakest posting since December 2013. 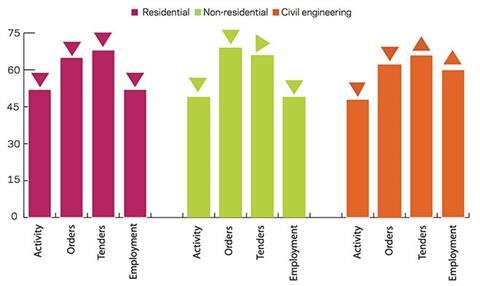 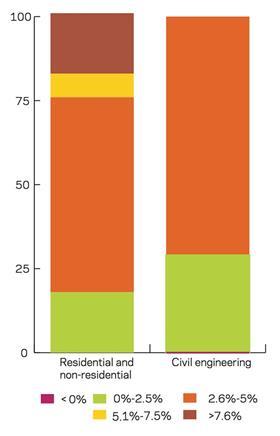 During April 2015, 18% of non-residential and residential respondents reported labour cost inflation in the range of 0% to 2.5%. Meanwhile 58% reported inflation at a level between 2.6% and 5%. This represented an uptick from 29% in January. The percentage of those reporting no inflation fell to 0 on a quarterly basis. Approximately 7% of respondents indicated that their wage bill had risen by between 5.1% and 7.5%, easing slightly from its level three months earlier. The share of firms who experienced labour cost growth of more than 7.6% moderated slightly to 18%.

Activity among the 12 regions and devolved nations was mixed in April. Yorkshire and Humberside continued to perform well, rising by six points to 89 in April. The other regions which saw an expansion in their activity index were the North-west (61), East Anglia (68), the South-east (61) and the West Midlands (48). Although the West Midlands has seen an improvement in its index, it has now remained in negative territory for six consecutive months, indicating a persistent decline in construction activity sentiment in the region. Scotland managed to remain in positive territory in April, at an unchanged 54 points. It was a similar story for the North-east, which stood firm at 58 points. Both the East Midlands and South-west fell by four points to 75. Despite this fall both remained firmly in positive territory. With a two-point decline Northern Ireland’s index reached 59. Meanwhile Wales’ index moved closer to the no change mark, with a four-point contraction to 54.

The UK index, which includes firms working in five or more regions fell four points to 58 in April. 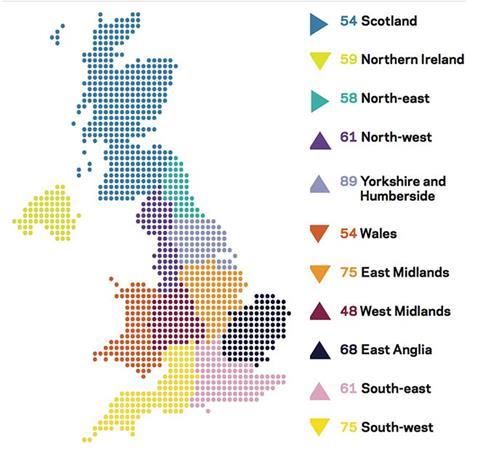 CFR’s Leading Construction Activity Indicator incorporates a range of factors to assess the construction industry’s prospects over the next quarter. The indicator is put together using information about past levels of activity, orders and tender enquiries.