The construction activity index went up by 13 points in August to a level of 56 points. The repair and maintenance (R&M) index, however, not only did not recover, but continued its downward trend to end at 37 points – a low level not seen since March 2013.

All three sectors – residential, non-residential, and civil engineering – recorded jumps in activity in August, namely by 15, six, and 10 points respectively from their July levels. As a result of these increases, their indices stood at 53 for both the residential and non-residential sectors and 68 points for the civil engineering one. This suggests that the indices may be returning to normality after July’s negative shock, which may well prove to have been a very short-lived phenomenon related to the referendum result on 23 June.

The steady negative trend in the orders index since April was finally reversed in August with a jump of 12 points back to April’s level of 73. The tender-enquiries index lost the four-point improvement made in July and returned to 55 points.

The tender price index appears to have recovered some of the fall seen since February. The index in August stood at 63 points, 12 points higher than in June, after a decline to close to the no change level in July.

After an 11-point gain in August, the employment prospects index stands once again at 54 points, having recovered from what looks like a short-lived downturn in July.

Just over half of respondents (51.5%) reported having encountered activity constraints of one kind or another in August. The majority of those or nearly a third of all respondents (30.1%) reported insufficient demand as a limiting factor. One in 10 respondents (9.7%) experienced difficulties in attracting and keeping labour, as opposed to just one in 100 (1%) facing materials or equipment shortages. One in 20 respondents (5.1%) faced financing difficulties. The weather did not negatively impact the industry in August. 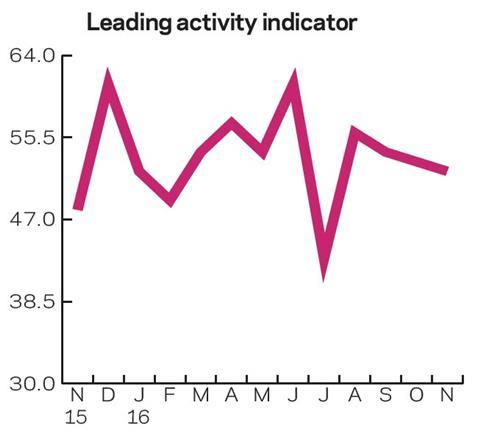 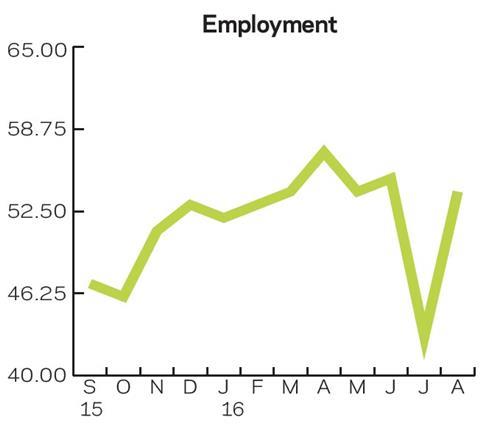 After July’s precipitous drop in the CFR’s Leading Construction Activity Indicator from 61 to 43 points, it recovered somewhat in August to a level of 56 points. We have thus revised our forecast for the three months to November from slightly negative growth to slightly positive. 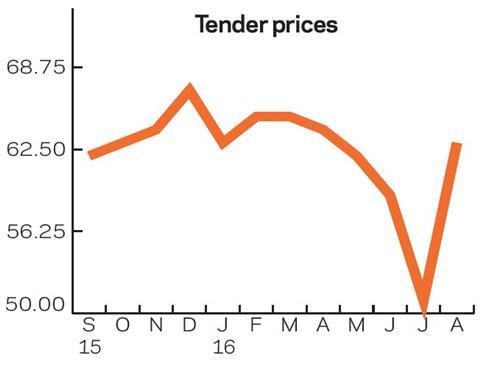 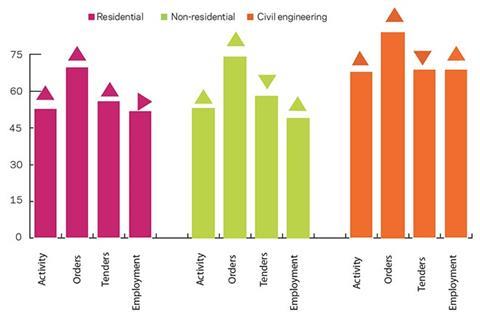 In civil engineering, however, there was no difference in material cost responses from three months ago. A third of respondents again reported increases of between 0% and 2.5%, while the remainder reported increases in the range of 2.5% and 5%. 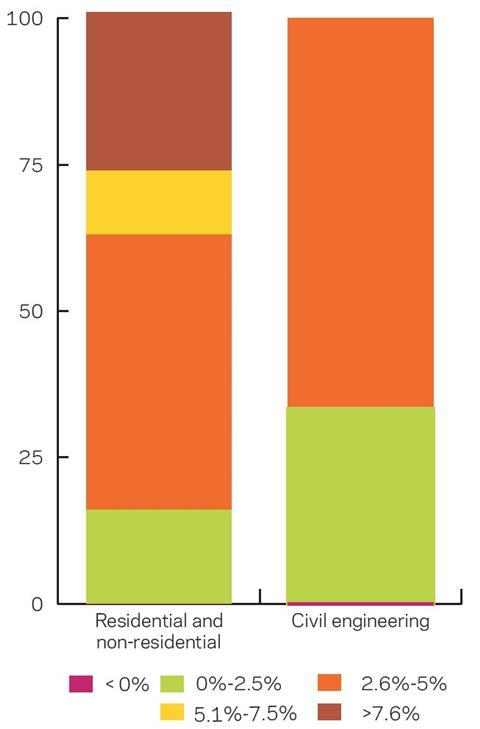 A stand out in August was the Yorkshire and the Humberside index, which gained 14 points to reach 78, just three shy of the North-east, which gained another six points to retain the lead it has held since June. Scotland and the South-east also recorded increases in their indices, albeit by only two and three points respectively.

The West Midlands’ index set a record low for the region at 30 points following an 11-point drop in August. Over the last couple of years, only Wales had recorded comparably low levels. Wales too recorded a drop in August – six points down to 41 points.

The South-west’s index remained unchanged at 64 points, while all other regional indices dropped between one and three points each. 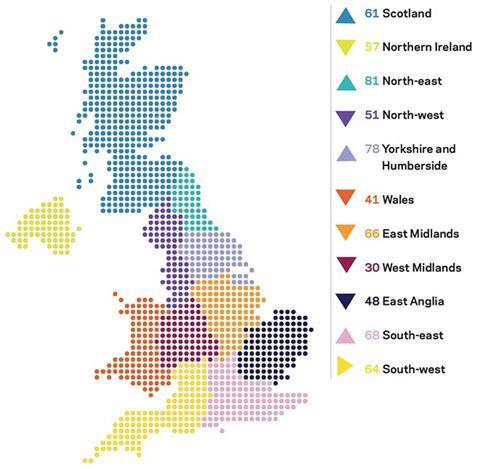