Orders and tender enquiries are looking healthy, and reporting of constraints is down. But employment prospects are a worry for some

The construction activity index stood at 60 points in February, representing a decline of two points on a monthly basis. The repair and maintenance activity index returned to growth, rising by eight points to 55. Activity in February was mixed among the three sectors. The non-residential sector felt the only decline, falling by four points to 62, while the civil engineering sector gained two points, reaching 65. Growth was flat in the residential sector, at 59.

At 66 points, the orders index has remained over 60 for its thirteenth consecutive month in February. On the same measure, tender enquiries experienced an uptick of two points to 64.

On the whole, opinions regarding construction activity constraints in February fell in relation to the previous month’s consensus. The percentage of respondents posting no constraints increased by 11 percentage points to 35% in the month. Worries regarding insufficient demand in the construction industry have intensified, however, with 36% of respondents stating it was an issue.

Meanwhile both bad weather and labour shortages have moderated, falling from 14% to just 8% and 9% respectively. According to responses from the construction sector, material and equipment shortages were in no way a burden during February, dropping by four percentage points. Financial constraints were an issue for 12% of respondents.

The employment prospects index fell below 50 points in February, reaching 48. This is the first time the index has fallen into negative territory since March 2014. A figure of 48 suggests that opinions regarding employment in the near future have changed for the worse. 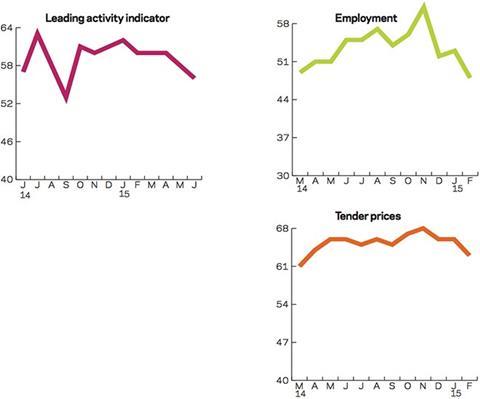 In February the CFR’s Leading Construction Activity Indicator dropped two points on a monthly basis to reach 60. It has remained at or above 50 in each month since September 2012. 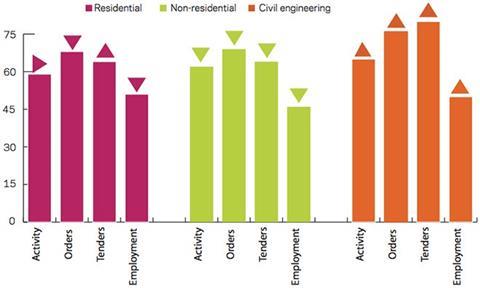 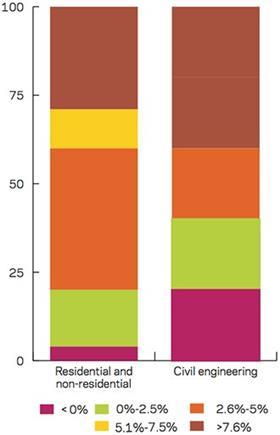 During February 2015, 29% of residential and non-residential respondents reported a reduction in material costs. Approximately 31% experienced material cost inflation below 2.5%, up from the November’s reported percentage of 10%.

The share of firms that experienced material cost growth of more than 7.6% increased to 40%.

Most regions and devolved nations saw an increase in activity in February. Both South-west (one point) and Yorkshire and Humberside (six points) strengthened further in February, reaching 79 and 78 points respectively. The East Midlands also posted an increase of six points to reach 71. Despite gains of two and four points respectively, the West Midlands (46) and Scotland (49) have now been in negative territory for the past four months.

The North-east managed to post a recovery of five points in February, pushing it up to the 50-point mark. Following January’s encouraging performance, Wales saw the sharpest decline, with a 10-point drop to 56. The North-west (48) contracted into negative territory for the first time since April 2013. Northern Ireland continued its expansionary trend, rising by three points to 58, while the South-east remained flat at 57 points. East Anglia’s index has exhibited low volatility over the last few months, and this continued in February as it ticked down one point to 60.

The UK index, which includes firms working in five or more regions, dropped to 57 points in February. 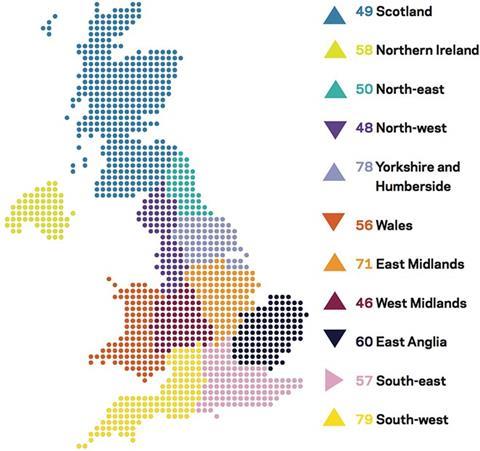