The total activity index shows growth but gradual decline is in progress – while the UK regional index is slowly losing momentum, with the largest decline experienced in the South-east. Experian Economics reports

The total activity index for January continued to indicate growth in the sector, despite its gradual fall since August last year. It stood at 52, two points down on December’s figure. R&M activity was also down, by three points relative to last month’s levels, but remained in growth territory at 53, three points above the no-growth level.

By sector, residential activity remained in positive territory, while civil engineering returned to the black. These indices moved up by one and nine points to 55 and 57, respectively. Non-residential activity, on the other hand, fell flat dropping five points on December’s figure to stand at the no-growth bound of 50 in January.

Both orders and tender inquiries remained in positive territory, exhibiting little movement over the last three months. The indices rose by two points each on December and stood at 67 and 57, respectively.

Orders in all main sectors were in positive territory, although the residential and non-residential sectors continued the slowdown seen in December. Residential ticked down by one point and non-residential orders by two points. However, civil engineering rebounded, gaining 13 points over January with a figure of 60.

The tender enquiry indices suggest growth in all sectors. The residential tender index gained four points in January and posted 59, while the gain in civil engineering was even greater – up by 14 points to 62. The non-residential sector recorded a slight deceleration as its tender index dropped three points on December’s figure to 54.

The tender prices continued expanding, with January marking the 18th month of a tender price index of above 60 points. The index gained five points over the last month and reached 66, a four-month high.

Employment prospects remained in positive territory for the sixth month. The index remained unchanged on December, at 53.

The activity index for January continued to suggest positive developments in contractors’ workloads, standing at 52 points, but it has been decelerating gradually since August last year. The Leading Activity Indicator lost two points from December’s figure and is expected to continue further down to the no-growth bound in February and fluctuate around its current level until May. 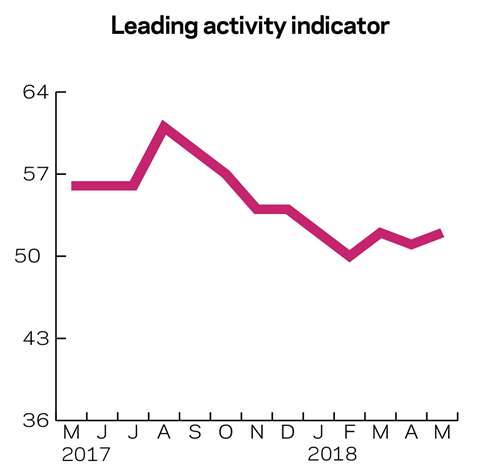 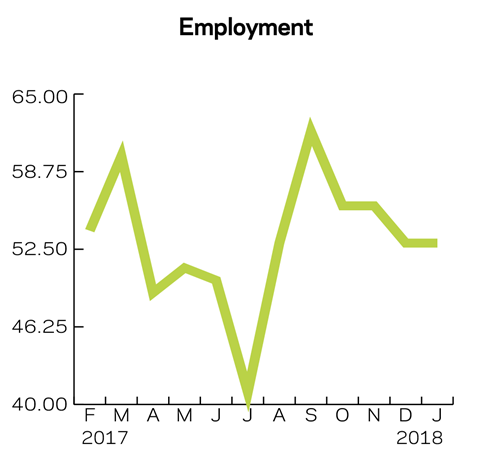 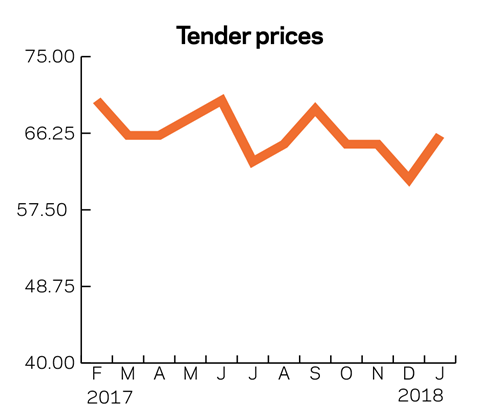 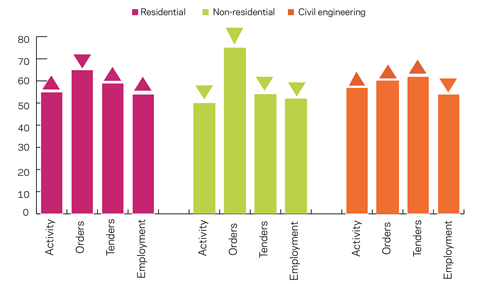 All respondents from the residential and non-residential sectors reported an increase in labour costs in January, a slight change from 98% in October.

Around 39% reported growth of labour costs exceeding 5%, which was up from 29% in December, while the share of agents facing cost rises up to 2.5% has climbed to 18%, up from 15%. Accordingly, those reporting cost rises between 2.6% and 5% account for 42% of the respondents, down from 54% in October. 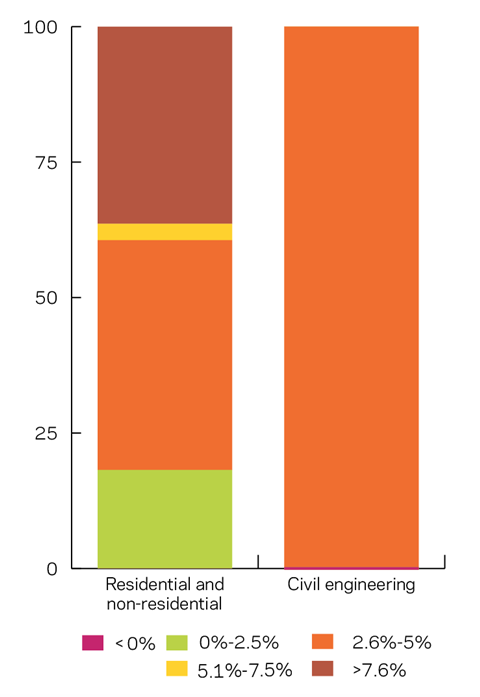 The UK composite index was estimated at 53 – a seven point drop on December’s figure. It has remained in positive territory since July 2017 but has been losing momentum since September.

In January, most of the regions remained in positive territory, while those in the negative in December saw a further slump. This meant a decrease in the UK composite index, although it remained above the no-growth bound.

Yorkshire and Humberside marked the largest increase – up by 13 points to 73, taking the lead from the North-east, which recorded no change. East Midlands was next, up four points to 56. North-west, Wales and Northern Ireland were the other three growing regions, at 56, 55 and 57, respectively.

The largest decrease was the South-east, losing six points, to 42. For the West Midlands, January marked the seventh month of an index value below 50 points, at 32, and its sixth month in last position. 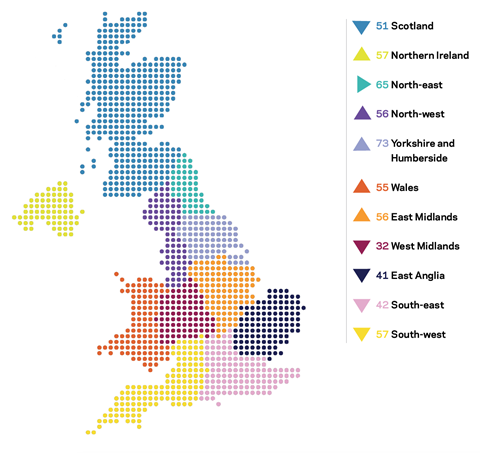