Construction activity remains consistent as the index picks up five points for the month, while the orders index sees a small incline and residential experiences a significant uptick

The orders index climbed three points to reach 68 in July; this was the 10th consecutive month of above average orders. Tender enquiries were also up, rising 12 points to 62, their highest value since the beginning of the year.

The proportion of respondents indicating that labour shortages were restricting productivity increased to 18% in July. Those experiencing no constraints on activity rose to 32%, while financial constraints became less of a factor, down to 10%.

Material/equipment shortages remain of little worry, as only 5% of respondents were concerned. Meanwhile, insufficient demand remained a significant factor, at 18%, up 13 percentage points since the corresponding period of 2013.

Bad weather has been of negligible concern, with <1% of respondents flagging it as an issue.

The employment prospects index was down slightly on a month-by-month basis, with a decrease of one point to 54. Despite a fall in prospects, its sustained strength indicates that businesses expect employment levels to rise over the coming three months.

Tender prices saw little change in July, falling by one point to reach 65. Prices remained above the 60-mark for the sixth consecutive month. 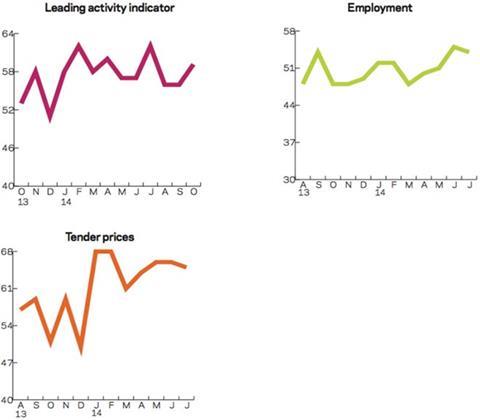 CFR’s Leading Construction Activity Indicator1 picked up to 62 in July, its highest figure since February, it was also the 19th successive month of above average activity, supporting the notion of a sustained upswing within the industry. 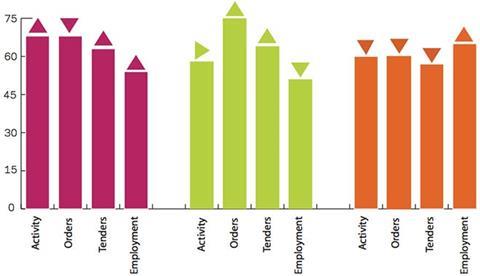 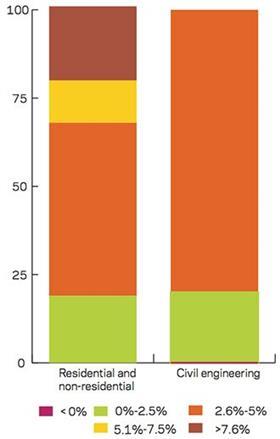 In July, six of the 11 regions and devolved nations saw their indices improve. Yorkshire & Humberside saw the largest increase with a 20-point upswing to 77. The East Midlands experienced a six-point uptick to 66. Despite Wales’ index climbing 11 points, it consistently remains rooted in negative territory. Moderate gains were also seen in East Anglia and the West Midlands, rising to 63 and 56 respectively.

Both the North-west and Scotland saw their indices remain stagnant in July, while the North-east climbed two points to reach 58. The South-west remained strong, despite falling one point to 68.

The South-east experienced the largest downturn, (-2 points), though the region stayed firmly in positive territory at 60. Northern Ireland posted a decline of one point; remaining in negative territory at 44.

As a whole, the UK index, which includes firms working in five or more regions, saw its index climb by two points to 62. 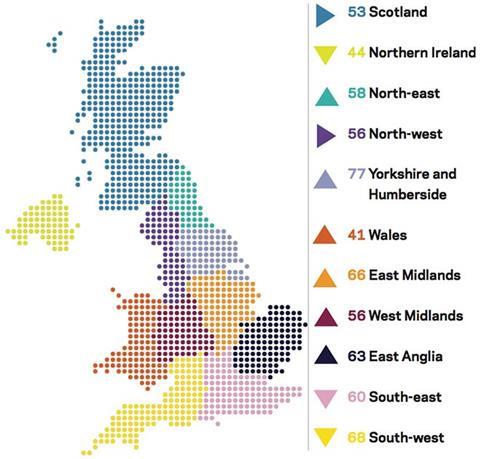