The overall construction activity index weakened significantly in June. At 45 points, it fell by 12 points on a monthly basis, and subsequently entered negative territory for the first time since August 2012. The fall was driven by sharp declines in sentiment within the residential and non-residential sectors.

Both fell below the no-change mark to 46 and 47 respectively. Civil engineering also declined, but at a lesser rate than for May.

The falls in activity are somewhat unexpected given that orders continued to rise sharply in June across each sector. In turn, total orders have risen by four points to 70 over the same period.

On the whole, constraints on construction activity fell in line with the previous month’s consensus, which was 40%. The percentage of respondents posting no constraints stood at 39%, slightly below May’s proportion, yet well above the measure’s long-term average. This indicated further easing to factors which could adversely affect activity in the construction industry.

Insufficient demand was still a primary concern among the panel of construction firms, with 31% of respondents reporting it as an issue in June, although it remains below its long-term average proportion of 36%. Concerns over finance and labour shortages were next in line, with respective shares of 14% and 10% – the former up slightly on May’s share, while the latter registering at its lowest level for more than a year, indicating that labour supply may no longer be the issue it once was. Elsewhere, bad weather and material/equipment shortages continued to be of little concern.

The employment prospects index fell to 50 in June, indicating that firms were not likely to increase or decrease their current staffing level over the next three months. 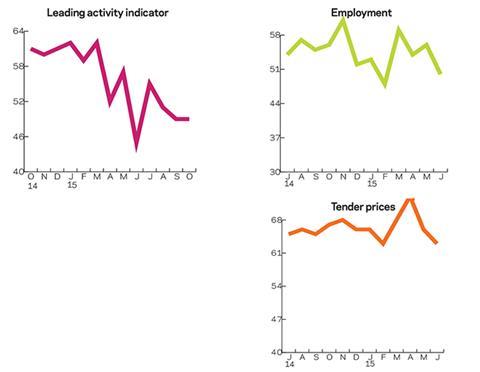 In June, CFR’s Leading Construction Activity Indicator fell by 12 points to 45, which was its lowest level since August 2012. 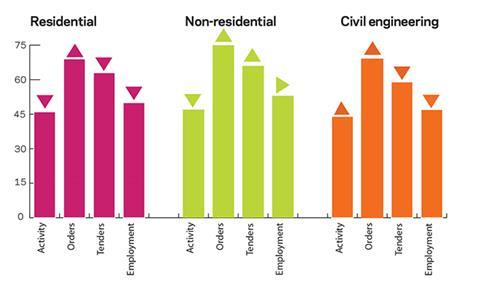 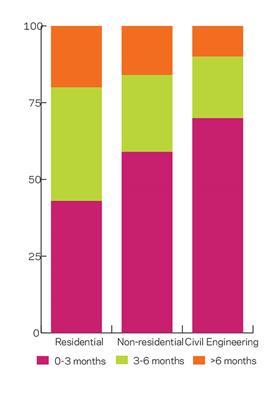 During June 2015, 43% of residential respondents reported less than three months’ work in hand, while for non-residential and civil engineering firms this was 59% and 70% respectively. The residential sector saw the highest proportion of respondents (37%) reporting that they had enough work to keep them active for between three and six months.

The residential sector reported that 20% of work was readily available after six months. Approximately 16% of non-residential firms reported that they had more than six months of work in hand, while for civil engineering respondents this was around 10%. 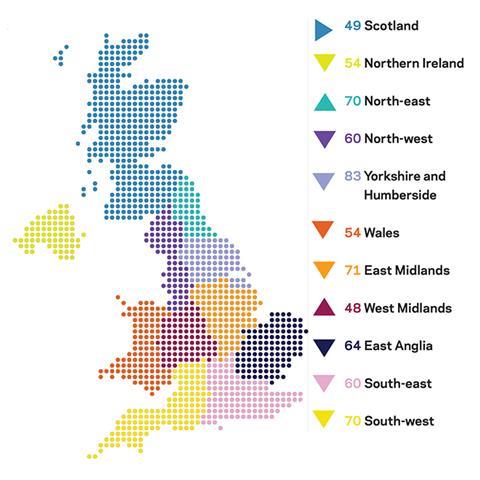 In June the majority of regions and devolved nations experienced a decline to their activity indices. This was in sharp contrast to May’s trend and somewhat unexpected given the current strength of underlying fundamentals such as the level of new orders. Yorkshire & Humberside saw the largest contraction, albeit from a record high last month. Wales and the North-west were next in line with respective falls of four points and six points. Despite the drops both indices remained in expansion territory. Only the North-east and West Midlands managed to post any growth. The former ticked up two points to reach its highest level post recession. The latter also increased by two points but remained in negative territory for the eighth successive month.

The UK index, which incorporates firms working in five or more regions, dropped by four points to reach 52 points in June. This is its lowest level since July 2013.