The total activity index was unchanged at 56 points in June, signifying continued expansion. The repair and maintenance (R&M) index, in contrast, recorded further contraction in activity, despite reaching a higher figure of 48, up 11 points since May. On a sectoral basis, the civil engineering sector recorded the most significant change, dropping 44 points into negative territory with a figure of 25 points. The residential activity index ticked up one point to 51, marking a slight expansion. The non-residential index, on the other hand, dropped by six points to 52.

Both orders and tender enquiries recorded growth in June. The orders index fell from 70 to 62, while the tenders index ticked up by two points to 58. All three construction sectors saw drops in their orders indices, yet remained on the expansion side. The most significant movement was recorded by the non-residential orders index, which dropped by 15 points to 69. Residential orders stood at 58, six points lower than in May, and the civil engineering index was down to 69 from 72 points.

The residential tender enquiries index grew by five points to 62 in June, partially reversing the fall from the previous month. The non-residential tenders index marked no change and remained at 54, whereas the index for civil engineering tenders recorded a significant drop of 16 points, to a level of 58. The tender prices index marked its fourth consecutive month of growth. The figure ticked up two points to 70, remaining firmly in positive territory.

The employment prospects index lost two points and edged into negative territory at 49. This is the third month of marginal change (compared with 50 in April and 51 in May) and marks a reversal of the gains since the beginning of the year (51 in January, 54 in February and 60 in March).
Developments in the activity constraints showed a slight deterioration since May. 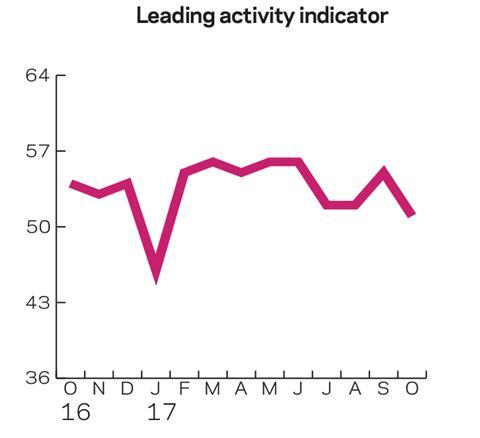 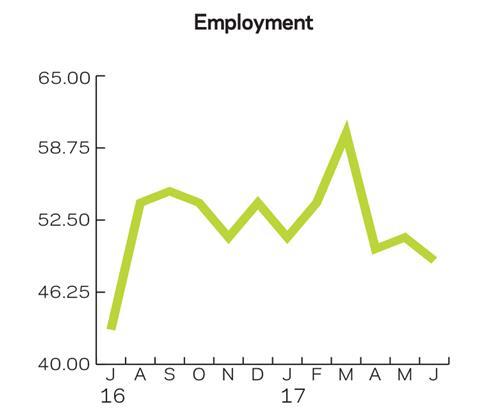 CFR’s Leading Construction Activity Indicator stood at 56 points in June, continuing its movements close to the level of 55 in the last five months. Expectations, however, point towards a slowdown in activity and lowering of the figure to a level of around 52 in the next four months. 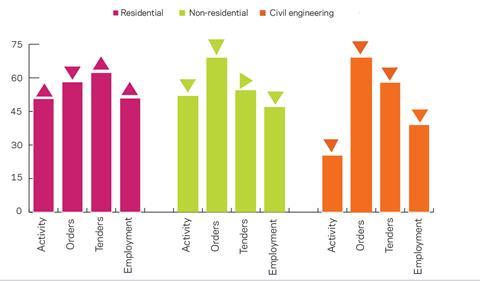 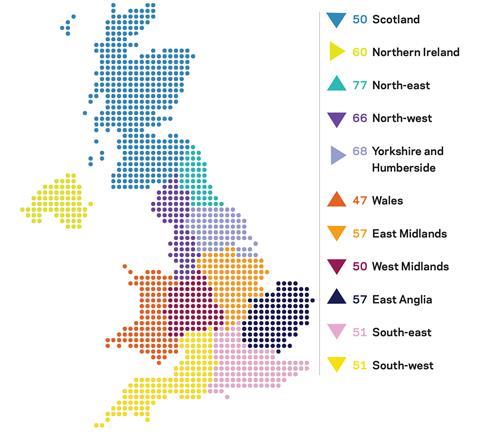 In June, most of the regions showed a decrease in their composite indices. All regions except for Wales, however, remained in positive territory, being at 50 points or more .

The most significant decrease was recorded by the East Midlands’ index, which fell by 11 points to 57. The South-east, West Midlands and Scotland recorded falls in their respective indices by six points each.

On the positive side, the largest improvement was seen in the North-east, where the index grew by nine points to 77. East Anglia and Wales also recorded an increase in their indices, albeit marginal ones (one and two points, respectively).

The UK composite index recorded a large slump of 14 points, falling to the no-growth threshold of 50. This is the worst figure since September 2016.

The full survey results and further information on Experian Economics’ forecasts and services can be obtained by calling 020 7746 8217 or logging on to www.experian.co.uk/economics