Overall activity remains strong, but those working on non-residential and civil engineering projects are starting to experience a fall in work in hand.Overall activity levels slipped closer to the no-growth point, although repairs and maintenance were up. New orders kept on growing strongly, but new enquiries less so.

The total activity index gained four points over May’s figure to stand at 58, the same as in April. But the R&M index remained flat at 51 points.

At the sector level, the non-residential activity index was the only one to increase, rising 10 points to 56. The residential index held up fairly well, but lost two points to also rest at 56. Civil engineering activity remained volatile, with June’s index hitting a four-month low of 38.

At the sector level, the residential and non‑residential tender enquiries indices showed improvement, gaining eight and two points respectively, to stand at 63 and 67. The index for civil engineering tenders fell by one point to 63. After remaining flat in May, the tender prices index dropped three points, marking a deceleration. The three-month average was down a point to 65. Employment prospects remained positive for the 11th month, as the index remained flat at its May level of 56 points.

In June, the share of respondents facing no constraints fell to 38% from 41% in May. None reported weather condition limitations or materials/equipment shortages. Those facing insufficient demand fell nine percentage points to 14%. Labour shortages became a bigger problem, rising 10 points to 26%. Financial limitations rose from 6% in May to 14%. Miscellaneous constraints rose from 2% to 7%.

The contractors’ activity index for June gained four points over last month’s figure to return to its level in April at 58 points. The leading activity indicator is expected to continue moving in positive territory but gradually lose momentum in the next few months. 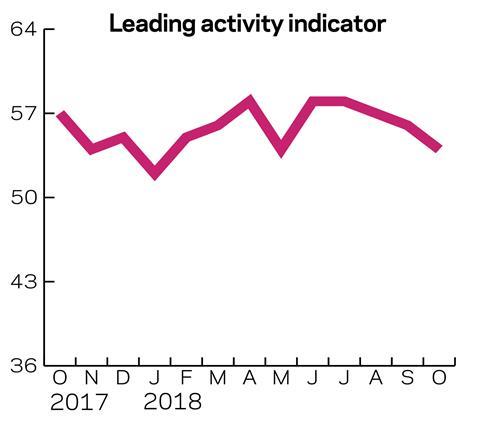 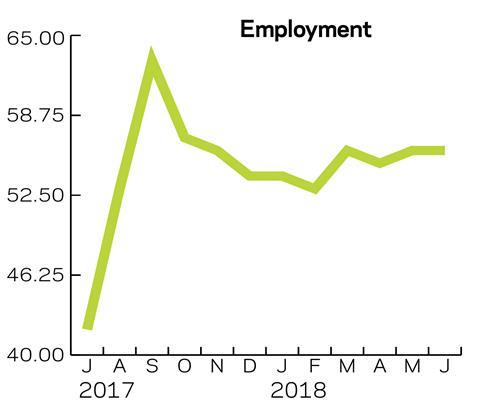 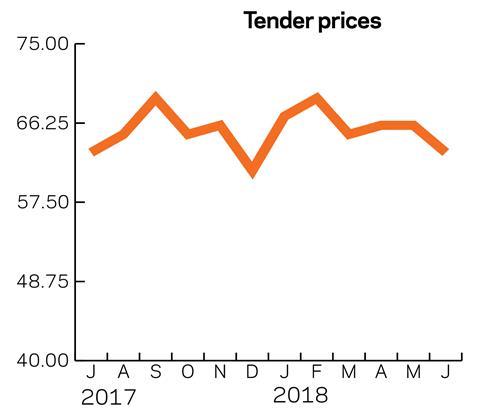 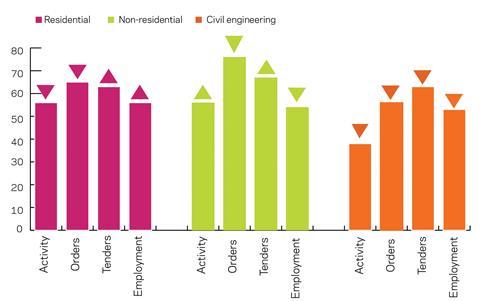 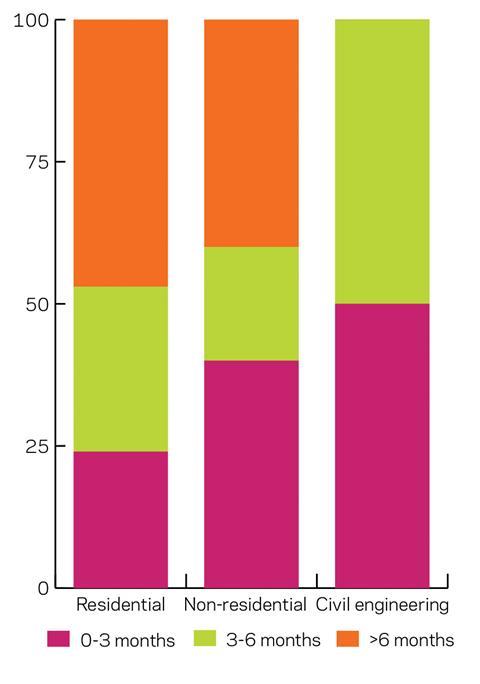 The amount of work in hand in the residential sector in June was almost unchanged compared with March, with 47% of respondents having work for more than six months, while 29% had work for three to six months (32% in March). The remaining 24% (up from 21%) had work in hand of up to three months.

Over the past quarter the non-residential sector saw a shift to shorter periods of time with work in hand. The share of respondents reporting available work for three to six months rose to 20% (up from 17% three months ago), compensated by a drop in participants reporting activity for more than six months – down to 40% (from 48% in March). The remaining 40% reported having work in hand for less than three months, close to the 39% figure in March. 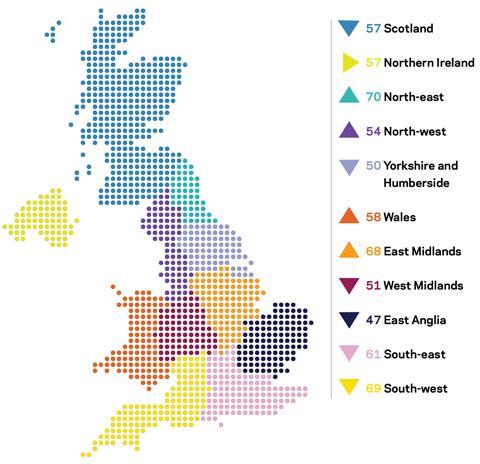 The overall UK composite index fell by a point as the losses in some regions overpowered the favourable developments in others. It stood at 59, down from 60 in May, the second-highest figure for the past six months.

Yorkshire and Humberside experienced the biggest drop, losing 11 points to stand at the no-growth boundary. The East of England retained its last position for a fourth consecutive month, as the region’s index ticked down by a point to 47. The North-east took the lead in June after gaining two points to 70. The South-west followed close behind, with an index of 69, despite losing five points. The South-east and the West Midlands lost six and seven points respectively, to stand at 61 and 51.

The East Midlands saw the biggest rise, with an 11-point gain to 68. Wales also experienced a similar 10-point rise to 58. The North-west index remained positive at 54 after gaining one point.

Northern Ireland and Scotland both registered 57 points, with the first being flat relative to its May level and the second losing a point over the same period.