All sectoral activity indices indicated expansion in activity in June. The non-residential sector gained three points to 51, while the residential index increased by five points to 55. The civil engineering index saw the biggest rise of 10 points, and stood the highest among the three, at 71.

Orders moved further into positive territory, at 61, after a gain of four points in June. The tenders index signalled expansion, as it rose by six points to 56. All sectors’ orders indices saw an increase and remained on the expansionary side. The non-residential sector gained four points to reach 59, the residential orders index increased by three points and posted 62, and the civil engineering sector gained two points to end at 79; standing at the highest out of all the sectors.

All the sectors’ tender enquiries indices saw growth and moved further into positive territory. The residential tenders index rose by three points to 54, while the non-residential index increased by four points to 57. The tenders index for the civil engineering sector saw the biggest increase of 13 points in June, taking it to 75.

The tender prices index remained in positive territory, despite losing four points in June to post a figure of 54. The employment prospects index moved into positive territory in the month thanks to a gain of five points to 52.

The results from June suggest the share of respondents experiencing activity constraints has decreased. Just over half of the respondents (51%) reported no constraints to construction activity in June, up from 48% in May. Insufficient demand and labour shortages saw decreases to 19% (25% in May) and 12% (15% in May) respectively.

The contractors’ activity index for June gained six points and moved further into positive territory to 56. The leading activity indicator is expected to reduce slightly over the coming months but remain above the no-growth bound. On average, the index is projected to stay around 54 for the forecast period. 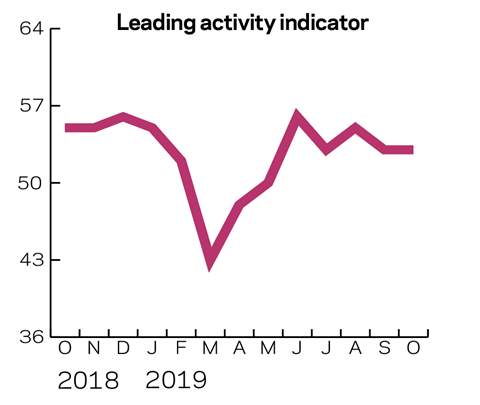 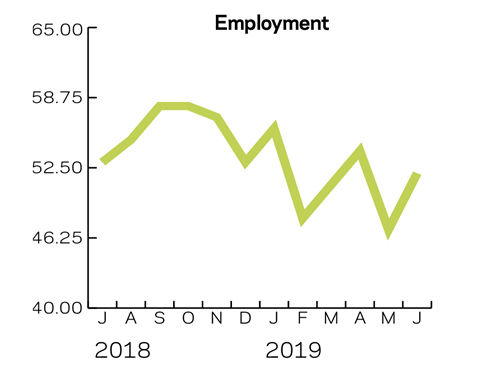 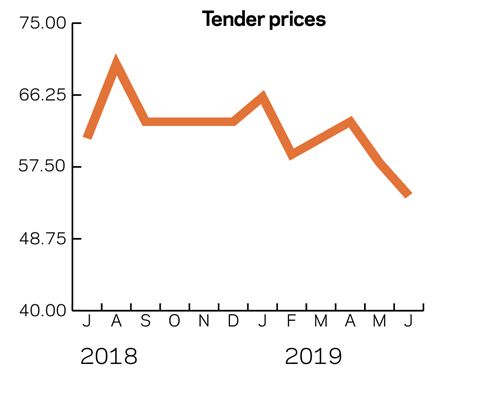 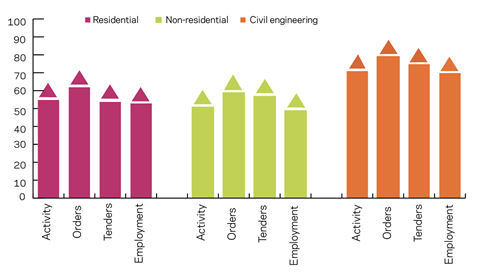 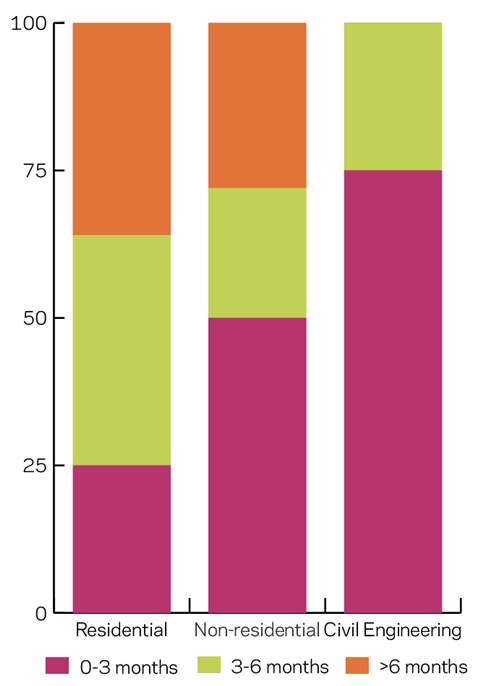 The share of participants in the non-residential sector with work covering three to six months ticked up by two percentage points to 22%. The share of agents reporting work in hand up to three months was unchanged at 50%, while the share of those with work exceeding six months contracted by only two percentage points to account for 28% of respondents for the sector. The amount of work in hand in the civil engineering sector covering three to six months increased to 25% (0% in March). The share of respondents in the sector reporting having work for up to three months fell to 75% (100% in March). No participants in this sector reported work in hand exceeding six months, unchanged from March. 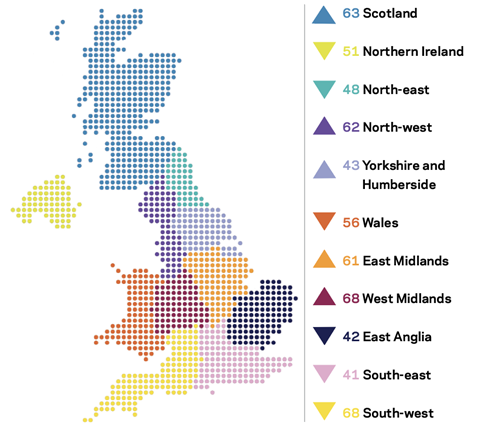 The South-west remained among the best performing regions for the seventh month in a row despite losing one point, sharing the lead with the West Midlands. The latter saw its index gain 14 points in June to reach 68. Scotland followed, with an index of 63, with a one-point gain in the past month. The index for the North-west placed the region among the high performers after adding five points to reach 62. The East Midlands saw the biggest rise of 20 points to 61, also placing it among the top-performing regions. Wales remained on the expansionary side even though its index dropped by six points to 56. Northern Ireland’s index fell by two points but managed to remain expansionary at 51.

The South-east was the worst-performing region. Its index dropped to 41 in June, following a six-point loss, and remained in negative territory for the eighth month in a row. East Anglia’s index fell by three points to 42. The North-east suffered a fall of five points to 48. The index for Yorkshire & Humberside remained in negative territory for the sixth consecutive month at 43. The UK composite index rose seven points in June to 52, despite mixed regional developments.