Overall activity slipped to its lowest point in almost three years, with contraction in every sector, while tenders continued to fall and orders, though still rising, lost some momentum. Experian Economics reports

All sectoral activity indices pointed at contraction in activity over March. Non-residential moved further into negative territory, losing three points to 44. Residential also fell to 44, following a 12-point loss. The drop in civil engineering was the most significant, but its index nonetheless stood the highest among the three, at 46.

Orders remained in positive territory, at 53, despite losing four points. The tenders index continued to signal contraction, as it ticked down by a point to 47.

All sectors’ orders indices remained on the expansionary side. However, only non-residential gained momentum, adding four points to reach 58. The residential orders index dropped six points to 54, while the civil engineering sector slowed the most, losing 18 points to 53.

The residential and non-residential tender indices signalled no change in enquiries as they both settled at 50. The former retained its level from February, while the latter added six points. Civil engineering tenders lost 11 points to 48.

The tender prices index remained in positive territory, after gaining two points to 61.

The employment prospects index gained two points to 50, its second-lowest point since July 2017.

The share of respondents experiencing activity constraints decreased in March. Just under half (46%) reported no constraints to construction activity. This related to an even greater decrease in the share of respondents reporting unfavourable weather conditions and miscellaneous factors, both categories having no effect over construction activity in March, according to respondents. Insufficient demand, however, emerged as a major factor, as cited by 37% of the respondents.

The contractors’ activity index for March lost 10 points and dived into negative territory to 43. The leading activity indicator is expected to improve slightly over the coming months, but remain below the no-growth bound of 50. On average, the index is projected to stay around 47 for the forecast period. 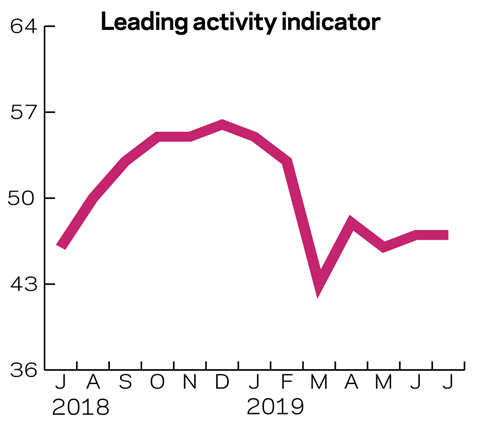 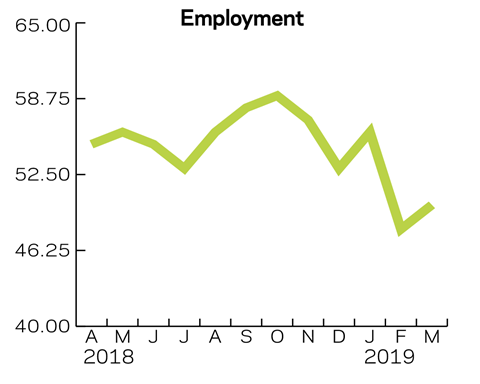 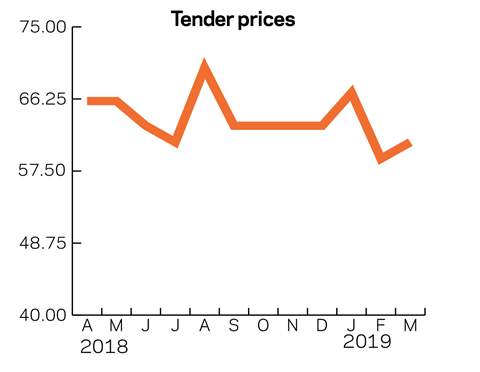 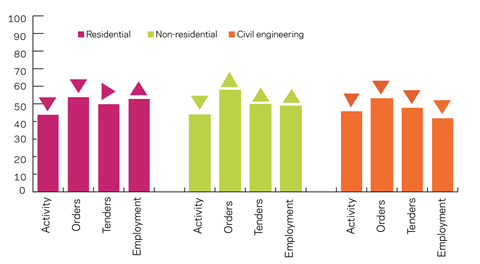 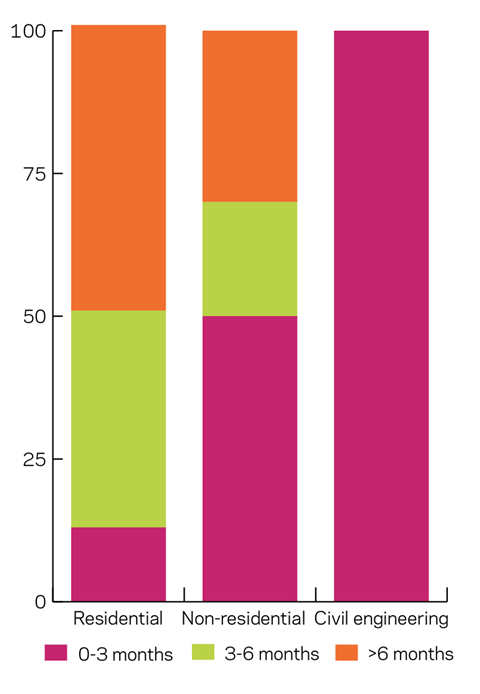 The share of participants in the non-residential sector with work covering three to six months shrank by eight percentage points to 20% and reflected the expansion in the other two groups. The share of agents reporting up to three months’ worth of work in hand reached 50% (against 44% in December), while the share of those with work exceeding six months expanded by only two percentage points to account for 30% of respondents for the sector.

The amount of work in hand in the civil engineering sector decreased. All respondents in the sector reported having work for up to three months. This signals a decline in activity for the sector compared with December, when one-quarter of the respondents had work covering three to six months. 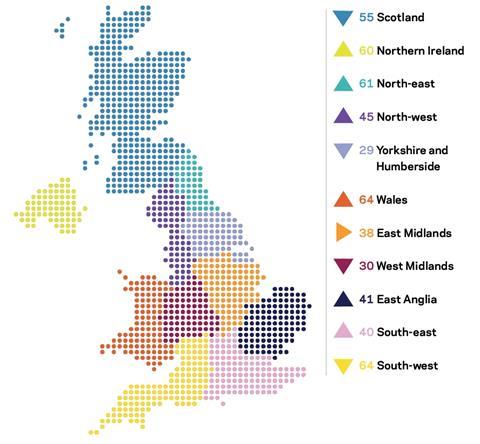 The South-west remained one of the best-performing regions for the fourth month in a row despite losing two points, sharing the lead with Wales, whose index gained 14 points in March to reach 64. The North-east followed behind, at 61, reflecting a four-point gain over the past month and marking a five-month high. Northern Ireland’s index gained one point to 60, placing it among the high performers. Scotland’s index registered a respectable 55, despite a three-point drop.

Yorkshire and Humberside performed  worst, losing 13 points, down to 29. The West Midlands was also in bad shape, with its index falling by nine points to post a figure of 30, the lowest since February 2018.

Despite marking some gains in March, the indices for the North-west (up four points to 45), the East of England (up four points to 41), and the South-east (up three points to 40) remained below the no-growth threshold. The East Midlands stood even lower, as its index retained its February level of 38.

The UK composite index dropped five points in March. At 61, however, the index stood at its second-highest figure since October 2017.