The construction activity index stood at 58 points in May, representing a rise of seven points on a monthly basis. The repair and maintenance (R&M) activity index saw a similar increase to reach 60 points. Activity growth in May was more robust than a month earlier. The civil engineering sector felt the only decline, falling by five points to 42. Meanwhile the residential and non-residential ones saw an expansion to their indices, rising by eight and six points respectively to 60 and 55.

The orders index also registered an uptick, rising one point to reach 66. It has now remained over 60 for 16 consecutive months. Meanwhile, tender enquiries contracted by two points to 63.

On the whole, opinions regarding construction activity constraints in May fell in relation to the previous month’s consensus. The respondents posting no constraints increased by eight percentage points to 40% in May, the highest proportion since our records began. This indicated an overall reduction in factors that could adversely affect activity as reported by our panel of construction firms. Concerns about insufficient demand in the industry have remained largely flat, with 30% of respondents stating it was an issue compared with 29% in April. A similar story can be told for bad weather and labour shortages, both moderating by just one percentage point from last month. According to responses from the construction sector, material equipment shortages remained of little concern, as only 1% of respondents reported them as an issue. Financial constraints continued to act as a potential drag on activity, as 14% of firms stated they were an issue.

The employment prospects index managed to sustain its recovery after slipping into negative territory in the early part of this year. May’s figure of 56 suggests that opinions regarding employment in the near future are positive.

The overall tender price index remained strong in May, despite falling by six points to 67. 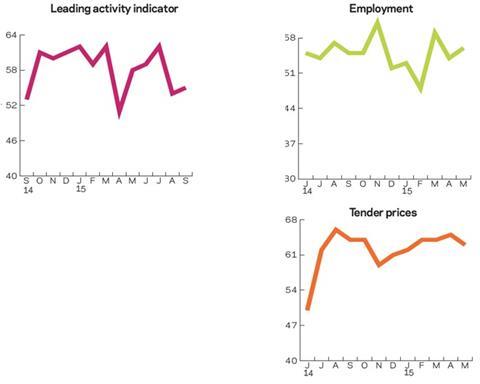 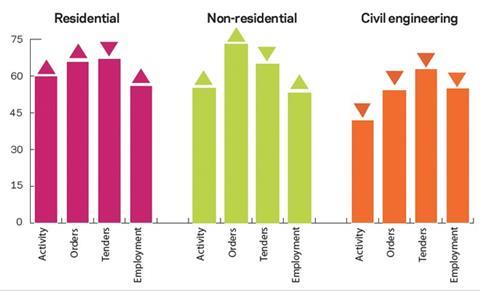 In May the CFR’s Leading Construction Activity Indicator experienced an uptick of one point to reach 58. It has remained at or above 50 in each month since September 2012.

During May 2015, just 3% of residential and non-residential respondents reported a reduction in material costs. Approximately 14% experienced material cost inflation below 2.5%, down from February’s reported percentage of 16%. The proportion indicating that their material costs had grown by between 2.6% and 5% rose to 56%. Those who saw costs increase between 5.1% and 7.5% increased to 17% in the last month. The share of firms that experienced material cost growth of more than 7.6% was considerably lower in May than it was three months earlier, falling from 29% to 11%. 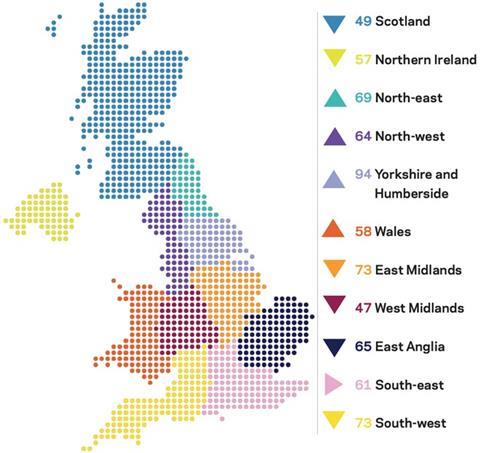 The North-east’s index saw the strongest uptick with an 11 point increase to 69. Sentiment in Yorkshire & the Humber (94) was particularly strong, after a further expansion took it to its highest figure since December 2013. The only other regions to see an uptick were the North-west (64) and Wales (58), rising by three and four points respectively. Scotland (49) posted the strongest decline in May, contracting by five points and falling back into negative territory. The West Midlands failed to regain buoyancy after dropping a point to 47. The index has now been below the 50-point mark for seven consecutive months. The East Midlands (73) and East Anglia (65) both saw activity ease in May, with respective falls of two and three points. Northern Ireland saw a similar fall to 57 points. Despite posting the second highest figure in May, the South-west has continued to contract, dropping by two points to 73. Meanwhile, the South-east has remained flat at 61 points.

The UK index, which includes firms working in five or more regions, dropped to 56 points in May.