The construction activity index holds its position at 60 points, while the regional composite indices show that the majority of regions saw a decrease in activity

The construction activity index held steady at 60 points in November, representing no change on a monthly basis. At the sector level, both residential (61) and civil engineering (62) made gains in activity month-on-month. In contrast, the non-residential sector saw its index slip one point to 57. Meanwhile, the repair and maintenance (R&M) activity index fell three points to 37, its lowest level since July 2010.

The orders index climbed three points in November to 68. It has now posted above average orders for 10 consecutive months. Tender enquiries saw another solid expansion in the same period.

Construction activity constraints in November generally fell in relation to the previous month’s consensus, the percentage of respondents indicating “no constraints” increased by nine points to 34% in November. This suggests an overall decline in factors which could negatively impact activity as reported by our panel of construction firms. Of these, insufficient demand has become slightly less significant, falling by six percentage points to 32%. Bad weather has become more of an issue, although at 5% it remains a minor one. Those indicating that labour shortages were restricting productivity fell to 12%. The consequences of material/equipment shortages and financial constraints have become less of a hindrance to activity in November, posting reduced percentages of 5% and 10% respectively.

The employment prospects index stood at 60 points, up three points on the previous month’s level. The index has now remained above 50 for its seventh consecutive month, suggesting that firms are set to remain bullish in terms of new labour requirements in the short-term.

Tender prices gained two points in November to reach 69 points. The series has now remained above 60 for 11 consecutive months. This suggests we are in the midst of a sustained and robust expansion in tender pricing. 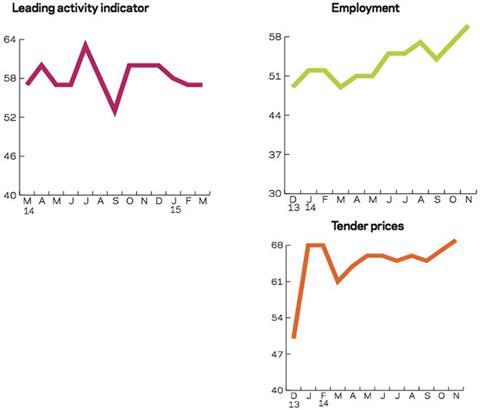 CFR’s Leading Construction Activity Indicator1 for November remained unchanged at 60 on a monthly basis. The index has now been at or above 50 since September 2012. 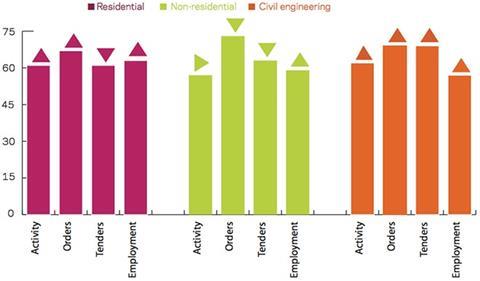 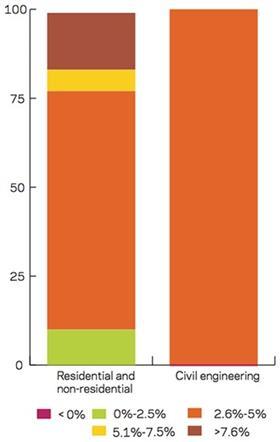 During November 2014, none of the residential and non-residential respondents reported a reduction in material costs. About 10% experienced material cost inflation below 2.5%, up from August’s reported percentage of 8%. The proportion indicating that their material costs had grown by between 2.6% and 5% rose to 67% last month, up from 57% in August. While those who saw their wage bill increase between 5.1% and 7.5% fell to 6% in November, down from its figure of 10% reported three months earlier. The share of firms that experienced material cost growth of more than 7.6% fell to 16%.

The majority of regions and devolved nations saw a decrease in activity in November. The largest fall was seen in Scotland’s index (43), with a 23-point contraction into negative territory. The only region to see an uptick in its index was the North-west, rising by two points to reach 63. Declines were in each remaining region and devolved nation, with the exception of East Anglia, which remained at 60 for the second consecutive month. The West Midlands, the North-east and Northern Ireland fell below the no-change mark to reach 47, 41 and 45 respectively. Despite a reduction to their indices; Yorkshire & Humber, the South-west and the East Midlands all stood well above the no-change mark, posting figures of 69, 79 and 68 respectively. Wales’ index stood at 52. The South-east (59) edged downwards by one point, extending its run at or around the 60 mark.

The UK index, which includes firms working in five or more regions, saw an increase of two points to 64. 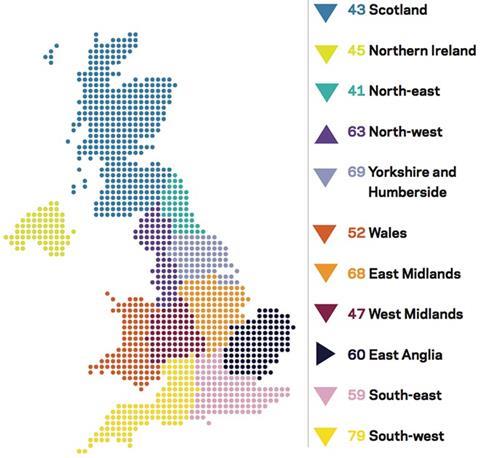