The construction activity index drops into negative territory for its third time in 12 months, while most individual regions experience a soft decrease in activity level

The construction activity index contracted on a monthly basis in November to 47 points, its third visit into negative territory in the last 12 months. The repair and maintenance (R&M) index descended further into contraction territory, after declining by three points to 45 on the same measures. Activity indices for all three sub-sectors also decreased in November. Residential (51) fell by a single point, but remained above the no-change mark of 50. Non-residential (47) slipped by a larger margin and subsequently fell into negative territory. The civil engineering sector saw its index plummet to its lowest value since November 2012, dropping 10 points on a monthly basis to 36.

At 66 points, the orders index improved substantially in November, up from 55 the month prior. Tender enquiries moved from 55 to 58 points.

In November, the percentage of respondents reporting no constraints to construction activity increased again – after October’s decrease – up to 37% from 30.4%. This was primarily driven by a reduction in those reporting insufficient demand as a constraint, from 42% in October to 33%. Despite the decrease it remains the largest single issue among our panel of firms. With a proportion of 8.3% in November, financial worries were slightly more prominent on a monthly basis, yet still below their longer-term average percentage. For the second consecutive month, there were no responses with concerns regarding material/equipment shortage. Meanwhile, bad weather (7.4%) was slightly less of an issue. The opposite was true for labour shortages (9.3%).

The employment prospects index (48) remained in negative territory in November, despite experiencing a two-point increase. This is the fourth month in a row that the index has sat below the no-change mark, its longest period to do so since early 2013. The reading suggests that firms are more likely to reduce their workforce, rather than increase it, over the next three months. 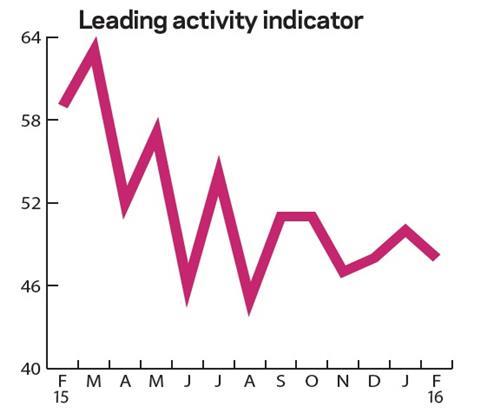 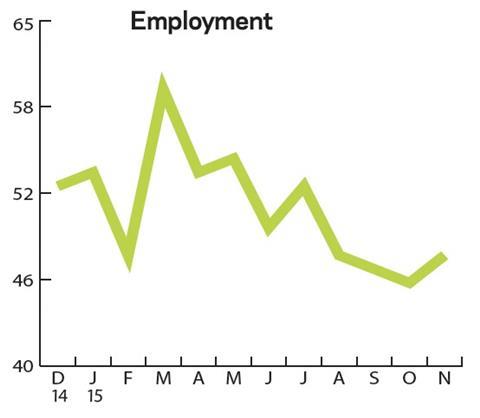 It was the index’s third visit into negative territory in the past 12 months. 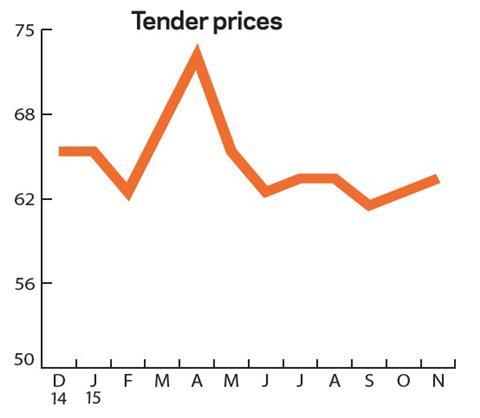 During November 2015, 17% of non-residential and residential respondents reported material cost inflation in the range of 0% and 2.5%. Meanwhile the majority (45%) reported inflation at a level between 2.6% and 5%. This represented a decrease from 67% in the same period of 2014. No respondents reported falling material costs in November. Similarly none indicated their wage bill had risen by between 5.1% and 7.5%, down from 13% three months earlier. The share of firms who experienced material cost growth of more than 7.6% remained at 27%. 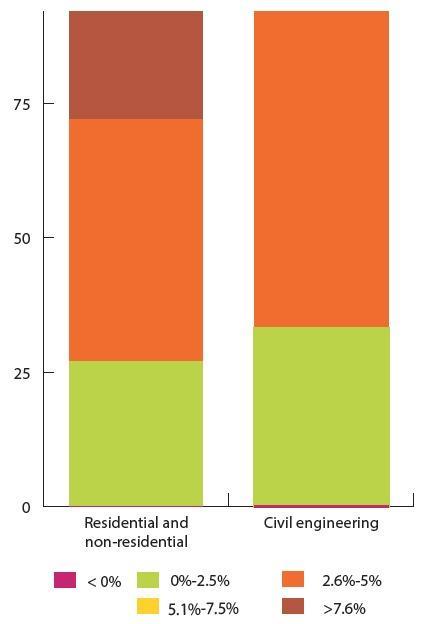 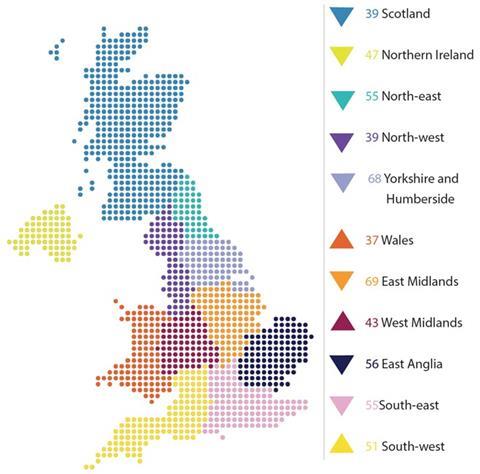 In November, most regions and devolved nations saw a contraction – only Wales, the West Midlands and the South-west improved, with the South-west (51) moving above the no-change mark after a fall below it in October. Wales saw the largest increase with its five-point rise to 37, but remains firmly in negative territory. The East Midlands (69) and Yorkshire & Humber (68) had the largest falls, at 12 and 11 points respectively, yet both stay in expansion territory. There were more subtle decreases across the rest of the UK with the North-east, East Anglia, South-east, North-west, Scotland and Northern Ireland all experiencing drops of between one and four points. However, most significantly, Northern Ireland (47) fell into negative territory for the first time since November in 2014.

The UK index edged up on a monthly basis to reach 59, marginally better than its 12-month average of 58.