Construction output recorded no change compared with the last quarter, while new housing construction is the primary reason for rises in new work output

The chart below shows Aecom’s index series since 2000, reflecting cost movements in different sectors of the construction industry and consumer prices. 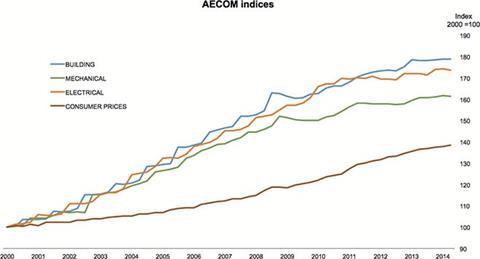 Despite a 0.32% increase year-on-year in the second quarter of 2014, the rate of annual change slowed again from +1.1 in the first quarter.

The electrical cost index increased by approximately 1% in Q2, broadly matching the yearly change seen in the two preceding quarters.

The annual consumer price inflation rate rose to 1.9% in June as a result of consumer spending on domestic goods and food. But the annual rate reversed these gains in July and fell back to 1.6%.

They are intended to provide an underlying indication of price changes and differential movements in the various work sectors but do not reflect changes in market conditions affecting profit and overheads provisions, site wage rates, bonuses or materials’ price discounts/premiums. Market conditions are discussed in Aecom’s quarterly Market Forecast (last published July 2014).

Price Adjustment Formulae indices, compiled by the Building Cost Information Service (previously by the Department for Business Innovation & Skills), are designed for the calculation of increased costs on fluctuating or variation of price contracts. They provide useful guidance on cost changes in various trades and industry sectors - i.e. those including labour, plant and materials - and on the differential movement of work sections in Spon’s Price Books.

The 60 building work categories recorded an average increase of 1.5% on a yearly basis. Higher rates of change were seen in:

The All Work material price index increased by 1.5% in the year to June 2014. Sector-specific demand continues to act as the spur for larger annual. Materials price increases for the construction industry over the last 12 months are detailed below:

The annual rate of consumer price inflation rose to 1.9% in June 2014, increasing notably from 1.4% in May. Consumer spending was the principal reason for the upward movement. However, the annual rate dropped to 1.6% in July.

Input price inflation decreased for the eighth consecutive month in June. On an annual basis, input prices fell by 4.4% on the broader measure. But core input inflation, which excludes volatile items, decreased at 3.5%, up marginally from the minus 3.9% drop recorded in May.

Factory gate prices rose just 0.2% in June, which is a slower rate of annual change than all preceding months in 2014. The narrower core index remained unchanged at 1.0% in June. 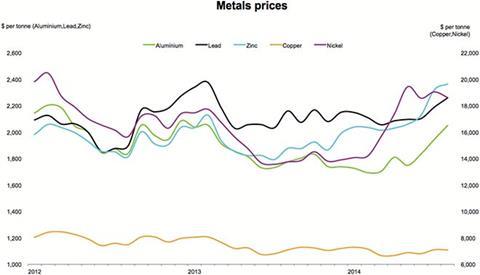 With the exception of copper, metals prices climbed higher in Q2 2014. In particular, the significant rises in nickel, aluminium and zinc result from a combination of haven status investing, restocking and supply constraints. Copper prices, though, remain weaker as Chinese imports declined again and domestic production of refined copper increased.

Sterling’s rise throughout 2014 continued in the second quarter. But a change of direction in July against the US dollar, in particular, was propelled further, in part, by Bank of England indications regarding future interest rate hikes.

The parties to the Construction Industry Joint Council have agreed a new pay deal, which sees pay rates increase by 3% from 30 June 2014, and a further 3% rise from 29 June 2015. Travel and fare allowances also increase from 30 June 2014, along with subsistence allowances increasing to £35 a night from 6 January 2015. The agreement also addresses changes to sick pay.

A 2.5% increase in hourly wage rates comes into effect from 6 October 2014. Amendments to the basic working week also apply from the same date, as the number of hours per week reduces from 38 to 37.5. Changes to the level of weekly sickness and accident benefit are also planned.

Members have received a 2%increase in hourly wage rates from 6th January 2014.

The Building and Allied Trades Joint Industrial Council (BATJIC) recently agreed a two-year pay deal effective from 30 June 2014. The deal involves variable wage rises for the standard wage rates averaging 2.5%. A further set of rises averaging 3% come into effect from 29 June 2015. Annual holiday entitlement will increase by one day, as of 29 June 2015, from 21 days to 22 days, making a total of 30 days including public holidays.