Though activity, orders and employment are down, firms are relatively upbeat about tender prices, which are at a three-year high. Experian Marketing Information Services brings the latest figures

Firms continued to indicate that orders were below normal for the time of year. Moreover, the index declined by five points to 43, an 11-month low. The orders indices declined across all sectors in May. The index for residential orders remained in negative territory in May and edged down by three points to 38. This was the lowest reading for two years. The non-residential new orders index dropped by seven points but still remained in positive territory at 54, signalling that orders were above average for the time of year. In contrast, the civil engineering new orders index fell by 13 points to 30, the lowest reading since the series began in April 1991.

Employment prospects for the construction industry remained gloomy, as the employment index remained below 50 and signalled a stronger pace of decline at 33, three points lower than the previous month.

Firms are more upbeat regarding tender prices, with the index rising by three points to reach the no-change mark of 50. It was the first time that the index had not been in negative territory for three years. 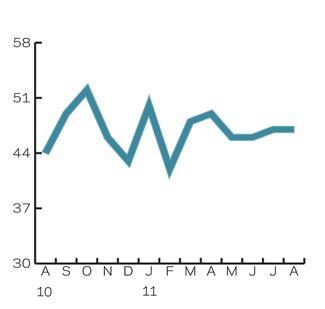 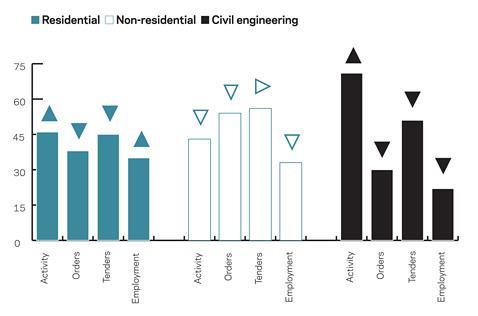 The continuing rises in materials costs must be one reason why tender price changes may be about to turn positive, as firms are no longer able to absorb these without passing them on to clients. 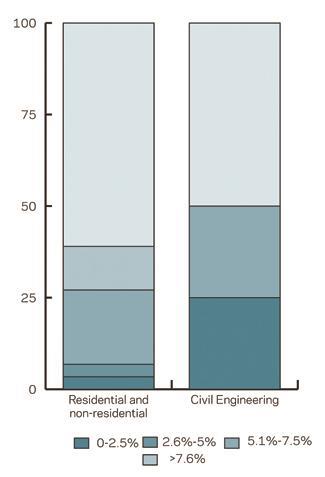 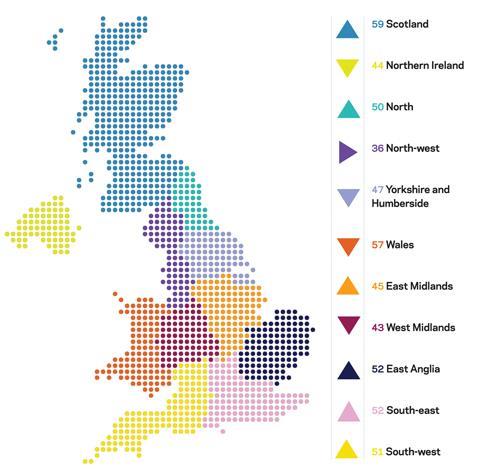 The indices for six of the 11 regions and devolved nations rose in May. The strongest increase was for the East Midlands, whose index rose by seven points to take it to a five-month high of 45. East Anglia’s index was three points higher at 52, taking it back into positive territory for the first time in six months. The Scottish index continued its recent strong performance, edging up by one point to take it to a 37-month high of 59. It was also the highest reading across all the regions and devolved nations.

The indices for the South-east and South-west remained in positive territory in May, edging up by one point to 52 and 51, respectively. The North’s index was also one point higher, reaching the no-change mark of 50.

The strongest fall was for Yorkshire and Humberside, which declined by four points to 47, returning to negative territory after three months. The index for Wales edged down by two points but remained in positive territory at 57, and the West Midlands index was also two points lower at 43. The North-west’s index remained unchanged at 36 and was again the lowest of all the regions and devolved nations.

The UK index, which includes firms working in five or more regions, fell by four points to 55.