Birmingham Masshouse project to use heat from district heating scheme 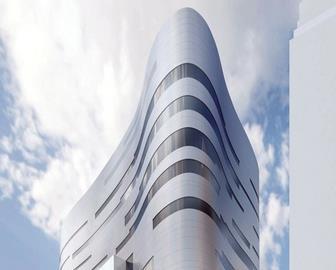 This is expected to reduce the development’s CO2 emissions by 88% compared with traditional forms of energy.

The BDEC’s new Eastside Energy Centre, on Aston University’s cam­pus, has two combined heat and power engines with a capacity of 3MWe. It provides electricity to the campus only, but will supply high pressure hot water, which can be used for heating or to create chilled water for air-conditioning through an absorption chiller, to surround­ing developments.

The £600m Masshouse scheme is the first of these. It consists of 550 apartments and 55,000m2 of offices, plus public spaces and amenities.

It will include a new magistrate’s court for Birmingham, by Denton Corker Marshall, the architect short- listed for the Stirling Prize for its Manchester Civil Justice Centre last year.

This is the BDEC’s second district energy centre for Birmingham. It estimates the first has generated carbon emission reductions of 4500 tonnes since it came into operation in 2007.