Construction output has a way to go to get back to pre-recession levels; materials prices aren’t going anywhere fast and steel is in free fall.

The following chart shows how Aecom’s cost index series reflecting cost movements in sectors of the construction industry have fared since 2000, with the movement of the Consumer Prices Index for comparison. 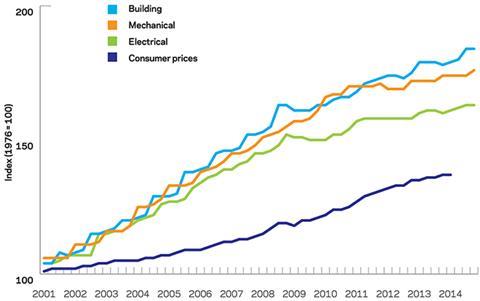 Building cost index
There has been a 1.8% increase in the index over the last 12 months with a 0.1% decrease between the last two quarters of 2013.

Mechanical cost index
The mechanical index shows a 1.5% increase over the last 12 months a 0.2% decrease between the last two quarters of 2013.

Electrical cost index
This index shows a year-on-year increase of 0.9%, which is lower than the previous Cost Update published in August 2013, but reflects a 1.3% increase between quarters.

Consumer prices index
The index rose 2% in the year to December 2013, a slight fall from November, and is exactly the government target.

Adjustment formulae indices, compiled for the Department for Business, Innovation and Skills, are designed for the calculation of increased costs on fluctuating or variation of price contracts. They provide useful guidance on cost changes in various trades and industry sectors and on the differential movement of work sections in Spon’s Price Books.

Over the last 12 months between December 2012 and December 2013, the 60 Building Work categories recorded an average rise of 1.1%, down marginally from the 1.2% reported three months ago.

Of the 60 work categories 43 categories show a price increase and 12 a price fall over the last 12 months, with an average increase of 0.5%.

The largest price increases over the last 12 months have been in the following work categories:

The largest fallers are:

The annual rate in December fell to 2% from 2.1% in November.

Key price movements over the last 12 months to December have been:

Seasonally adjusted construction output estimates for November 2013 indicate a fall of 4% when compared with October 2013. Factory gate inflation now stands at 1% and has been reducing since July 2013.

Construction output continues to rise at the start of 2014 with the latest Purchasing Managers’ Index rising to 64.6, which is above the neutral 50 value which represents growth, for the ninth successive month.

Metals prices continue to be mixed and no major price movements are expected until the China market returns. Analysis by the World Bank suggests that there will be generally lower metal prices continuing throughout 2014.

Sterling has appreciated 8.1% in the past 12 months. The euro rose 6% and the dollar strengthened 3.7% amid speculation an improving economy will prompt the Bank of England to raise interest rates sooner than current predictions.

Construction materials
Materials price increases for the construction industry over the last 12 months are detailed below:

The All Work material price index continues its slow upward trend with monthly increases not exceeding 1% for over 18 months. December bucked this trend with inflation rising to 1.1%.

A few materials have shown above or below average price movement over the last year:

The arrival of 2014 has seen the normal range of price increase announcements from many UK manufacturers and suppliers ranging from 5-15%, with the biggest increases being seen in masonry and concrete products.

Labour Construction workers’ pay is up 2.5%, on back of the new BATJIC agreement

The 2013/14 agreement involves a 2% increase in pay. The rise is across the board except for the hourly rate for the Adult General Operative, which increases by 3% from £7.96 to £8.20 per hour. There are also improvements in the death benefit scheme, which increases to £25,000, and statutory sick pay rises to £119 per week.

Construction Industry Joint Council
CIJC rates will increase from 30 June 2014 when the hourly rate for a General Operative will be £8.27 per hour (£322.53 per 49-hour week).

Travel and fare allowances will also increase from June 2014.