Activity rose in February on the back of a sharp increase in civil engineering work - and it was a strong month for orders too. Experian Economics crunches the numbers

The construction activity index increased by one point to 54 in February, the second consecutive rise following a large fall in December, even after seasonal adjustment. Activity indices across all sectors were above the no-change mark of 50 in February. The civil engineering index saw the sharpest rise, gaining 17 points to take it back into positive territory at 62. The residential and non-residential indices both weakened a little, falling by one to 51 and by four to 52, respectively.

Following two months at the no-change mark of 50, the orders index climbed five points to 55, indicating above-average orders for the time of year. All sectors saw rises in February. The residential index added five points taking it back into positive territory at 52. The non-residential and civil engineering indices both rose at a faster pace than in January, with the former moving up one point to 63 and the latter reaching 61 - a rise of nine points and its highest mark since December 2007.

The percentage of respondents reporting no constraints on activity increased to 20% in February, in line with the rising level of activity. However, the proportion indicating that insufficient demand was restricting activity also rose to 48%, although this was still 12% lower than a year ago. Bad weather continued to be a problem, with 12% of respondents indicating that this was holding them back, well above the average for the past year.

The employment index increased by one point to 46, indicating a slight slowdown in employment decline for the fifth consecutive month. However, the index has now been in negative territory for just over five years.

The tender prices index dropped back one point to 51 . However, this still indicates that firms are expecting the prices they charge to rise over the coming three months. 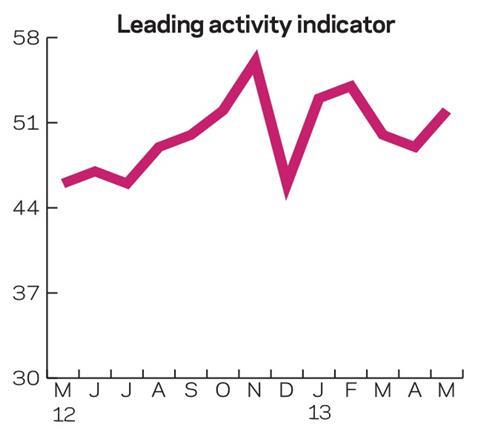 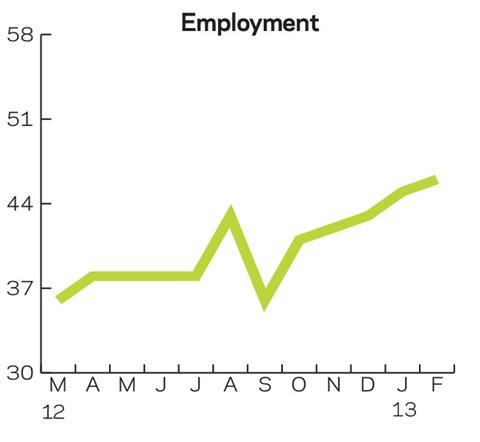 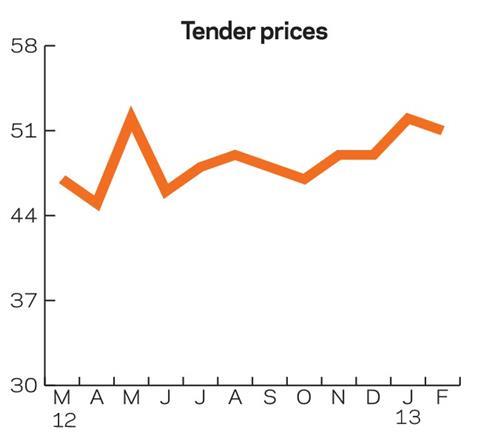 CFR’s Leading Construction Activity Indicator is predicted to fall by four points in March to the no-change mark of 50. In the following month, the index is expected to slide a further point before gaining three points to reach 52 in May.

The indicator is put together using information about past levels of activity, orders and tender enquiries. It uses a base level of 50 - above that level represents an increase in activity, below that a decrease. 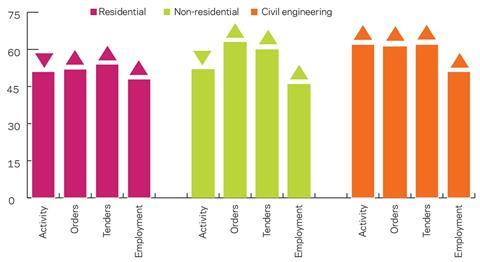 Roughly 8% of residential and non-residential firms reported that material costs had fallen on an annual basis in February. Fifty-two per cent of respondents reported rises of between 2.6% and 5%, down 5% when compared with three months ago. The percentage of building firms indicating material cost inflation of over 7.5% increased to 28% - a rise of 4% from November 2012.

In the civil engineering sector, 13% of firms reported deflation in the cost of their materials over the past year, significantly less than the 50% three months ago. Most firms (63%) indicated that material costs had risen by between 2.6% and 5% on an annual basis. For the fifth consecutive month no civil engineering firms reported material cost inflation of between 5.1% and 7.5%. 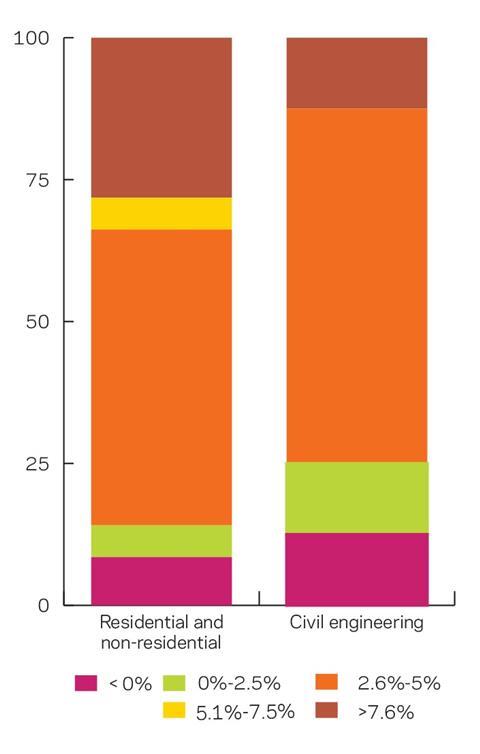 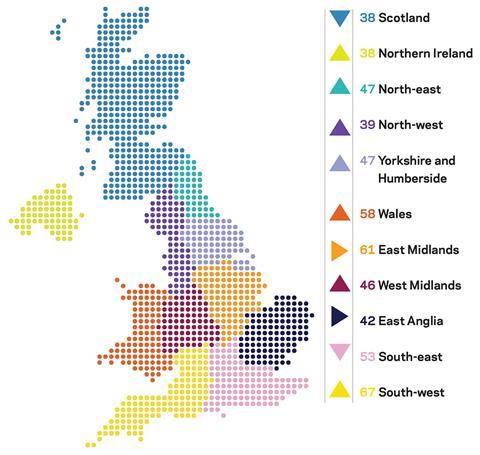 Experian’s regional indices incorporate current activity levels, the state of order books and the number of tender enquiries received by contractors. The indices for seven regions rose in February, with Yorkshire and Humberside experiencing the largest increase of 11 points, although this still left it in negative territory at 47. The West Midlands (46) and Northern Ireland (38) also remained below the no-change mark despite steep rises of nine and 10 points respectively.

Wales’ index edged further into positive territory, rising four points to 58 - its highest level since April 2011. The North-east, North-west and South-west all rose by two points, reaching 47, 39 and 67 respectively. In the case of the South-west, this was the highest level since July 2007.

Scotland experienced the greatest fall, sliding four points to 38 - its lowest level in 11 months. The South-east lost two points, taking it to 53, while East Anglia and the East Midlands remained unchanged at 42 and 61 respectively.

The UK index, which includes firms working in five or more regions, gained four points, taking it back above the no-change mark at 52.

This an extract from the monthly Focus survey of construction activity undertaken by Experian Economics on behalf of the European commission as part of its suite of harmonised EU business surveys.
The full survey results and further information on Experian Economics’ forecasts and services can be obtained by calling 020-7746 8217 or logging on to www.experian.co.uk/economics

The survey is conducted monthly among 800 firms throughout the UK and the analysis is broken down by size of firm, sector of the industry and region. The results are weighted to reflect the size of respondents. As well as the results published in this extract, all of the monthly topics are available by sector, region and size of firm In addition, quarterly questions seek information on materials costs, labour costs and work-in-hand.