The construction activity index ticked up by one point in June to 59, the highest figure since October 2007 and the fourth successive monthly rise. Activity picked up across every sector. Civil engineering saw the largest increase, up 39 points to 82, which is the highest figure since November 2007. The residential and non-residential sectors had moderate growth, the former increasing by two points to 61 and the latter rose by one point to 58.

The orders index reached 54 in June, up three points on the previous month; this was the third successive month of above average orders for this time of year. Tender enquiries remained unchanged from May at 61, up by 11 points on an annual basis.

The percentage of respondents indicating that they had no constraints on activity increased for the third successive month in June to 29%. In line with this the proportion indicating that insufficient demand was restricting activity fell to 45%. About 1% of respondents indicated bad weather was constraining their activity, down from 14% in the same period of last year. Labour shortages became a bigger factor in June at 6%, which was double May’s figure. Material/equipment shortages were of negligible concern as only 2% of respondents felt it was affecting their activity levels. Finally, the share of respondents reporting that financial concerns were hampering activity rose to 17%.

The employment index reached the no-change mark of 50 in June, taking it out of negative territory for the first time since January 2008. Businesses are now indicating that they expect employment levels to remain unchanged over the next three months.

The tender prices index rose by four points to 56 when compared to the previous month indicating that firms are expecting the prices they charge to rise over the coming months. 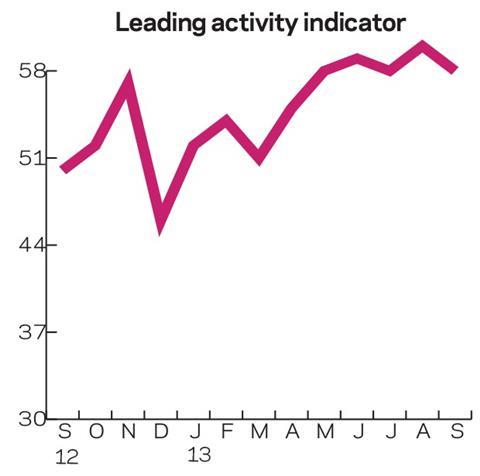 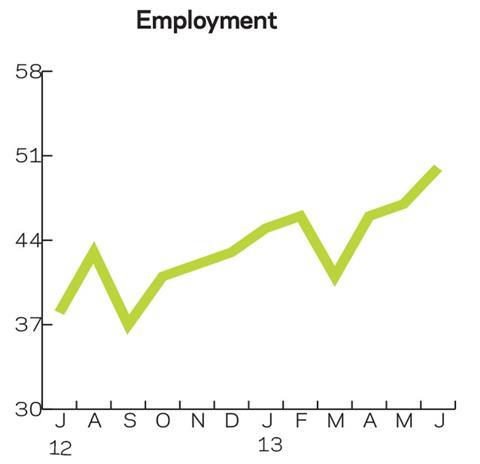 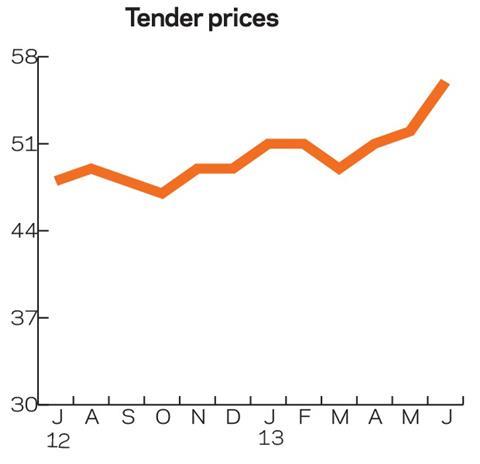 CFR’s Leading Construction Activity Indicator is predicted to fall by one point to 58 in July. In the following month the index is expected to gain two points, to reach 60, before this rise is cancelled out by a two-point decrease in September. The indicator uses a base level of 50: an index above that level indicates an increase in activity, below that level a decrease. 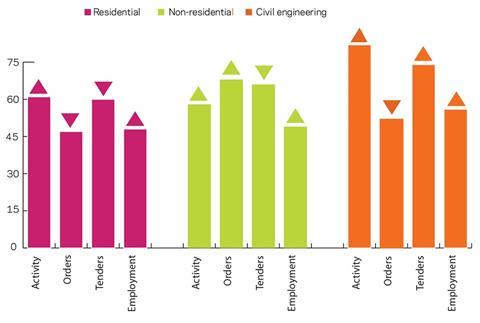 In June 2013, firms in all three sectors reported having less than three months work-in-hand, with only 26% of civil engineering respondents indicating they had three months or more (up 2% from three months ago). The largest change was also observed in the civil engineering sector, which indicated having over six months work-in-hand, an increase of seven percentage points to 13%, while the percentage reporting they had between three and six months dropped to 13%. 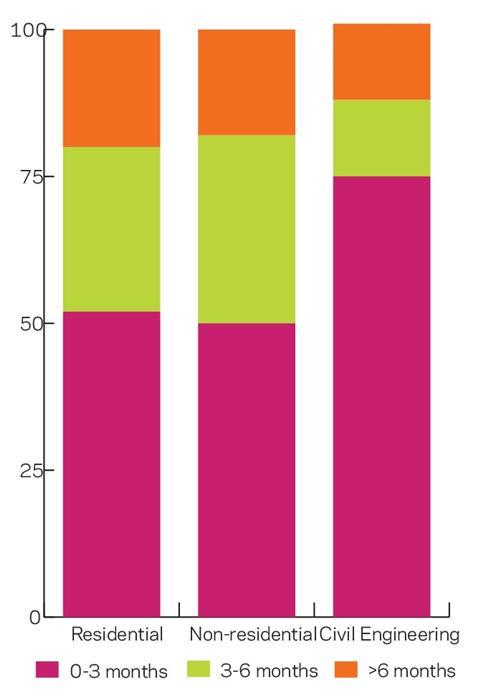 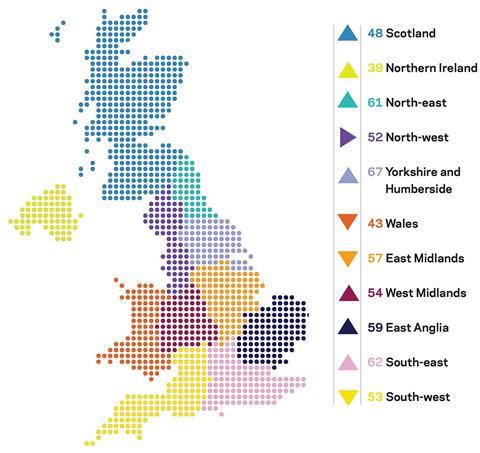 In June, seven regions saw an increase in their index. East Anglia experienced the sharpest rise, as its index gained 11 points to reach 59, taking it back above the no-change mark of 50 for the first time since March 2012.

The South-east (62) and Scotland (48) both saw a two-point increase in their respective indices.

Elsewhere, the indices for Northern Ireland and the West Midlands increased by three points each, reaching 39 and 54 respectively, while the North-west remained unchanged at 52 points. Conversely Wales (43) and the South-west (53) both experienced a two-point reduction. Despite seeing the sharpest fall of three points (57), the East Midlands remained in positive territory.

The UK index, which includes firms working in five or more regions, saw an increase of three points taking it to the no-change mark of 50.