Low tender enquiries have put pressure on construction firms and many are looking to cut their headcount. However, Experian Marketing Information Services reveals that bad weather, constraints on activity and finance were less of an issue this month

Although the construction activity index edged up to 49 in April, this was simply suggestive of a slowdown in the rate of decline in the industry. On a sectoral basis the residential (43) and civil engineering (43) indices continued to remain below the no-change mark of 50, leaving the non-residential (54) sector as the only one experiencing any expansion in activity.

In April the tender enquiries index crept down one point to 51. As the value was above the no-change mark, it was still in positive territory. However, firms were finding it difficult to convert these into orders, which were reported to be below normal for the time of year (the index remained unchanged at 48 in April).

The employment index has been hovering between the 35 and 39-point mark since the middle of last year. It remained below the no-change mark of 50 for the 39th consecutive month in April - signalling firms’ intentions to reduce their headcount over the coming three months.

The proportion of firms experiencing no constraints on activity jumped to 27% in April - the highest level since July of last year. In addition, there was a decline in the percentage reporting insufficient demand, when compared with the previous month, with finance also becoming less of an issue - all good news.

Not surprisingly, weather, material or equipment shortage did not pose a problem for any of the firms surveyed, although there was a small increase in the proportion citing “other factors” as a constraint.

CFR’s Leading Construction Activity Indicator shows that construction activity will continue to contract over the next quarter. The rate of decline is expected to quicken slightly in June as the index creeps down one point to 48, although a one point gain is predicted for the following month. 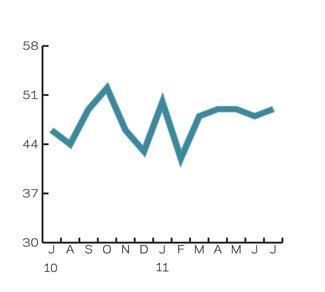 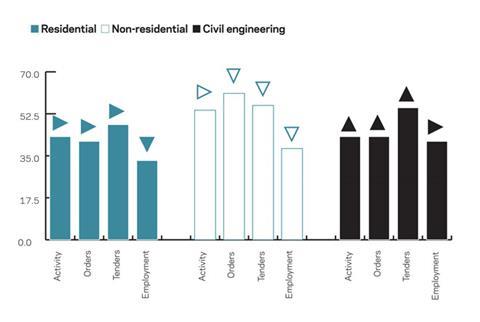 The proportion of building firms reporting a decrease in labour costs reduced from one-third (33%) in January to 27% in April. Meanwhile a quarter saw an increase of less than 2.5% - up on the 12% that said the same three months earlier. Another 25% of firms working in the residential and non-residential sectors reported seeing labour cost inflation of between 2.6% and 5%, while more than 18% felt the increase in labour costs had been greater than 7.6%.

In the case of civil engineering firms, two-thirds saw labour costs fall, while the remainder reported an increase of between 2.6% and 5%. 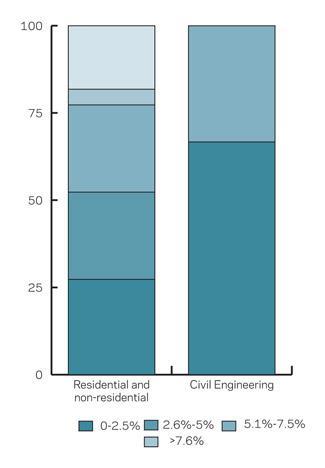 Five of the 11 regions and devolved nations saw a decline in their indices in April. The largest fall was for the North-east as the index decreased by five points to 49 - below the no-change mark for the first time since August 2010. The indices for Yorkshire and Humberside (51), West Midlands (45) and North-west (36) saw smaller falls of three points each. Northern Ireland’s index also edged down, by a point to 45 - remaining below 50 for the 14th successive month.

In contrast, the index for Wales jumped eight points to 59 - the highest level since February 2010. The Scotland (58) and South-east (51) indices were also in positive territory in April, increasing by three and four points, respectively. Although the index for East Anglia (49) saw a larger increase of five points, it fell just short of the 50 mark.
Despite the two-point increase to 38, the East Midlands index remained in decline for the fifth successive month, while that for the South-west (50) saw no change.

The index for the UK, which includes firms working in five or more regions, fell by three points to 59. 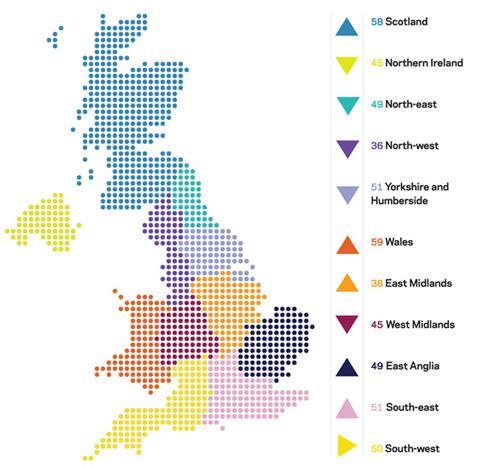