Construction activity stayed static last month, with increases in the non-residential and civil engineering sector indices failing to lift them from negative territory, according to Experian Economics

The latest data from Experian’s monthly contractors’ survey showed that construction activity index remained unchanged at 45 during March. The index has now been below the no-change mark of 50 since November 2010. All three sectors continue to see a decline in activity, but while the residential activity index fell by two points to 47, the indices for the remaining two sectors increased. The civil engineering activity index rose by four points to 42 while the index for non-residential edged up by one point to 46.

However, both indices remained in negative territory. The non-residential orders index was unchanged at 55 and has now been above the no-change mark of 50 since February 2010.

During March, the percentage of respondents reporting no constraints on activity increased for a second consecutive month, reaching 21%, the highest level since last October. Insufficient demand was relatively less important and fell from 60% to 55%, a proportion not seen since August 2011.

Respondents were more concerned with finance issues, as they were reported as a constraining factor on activity by 20% of firms. This was the highest since April 2009, when the reading was 21%. 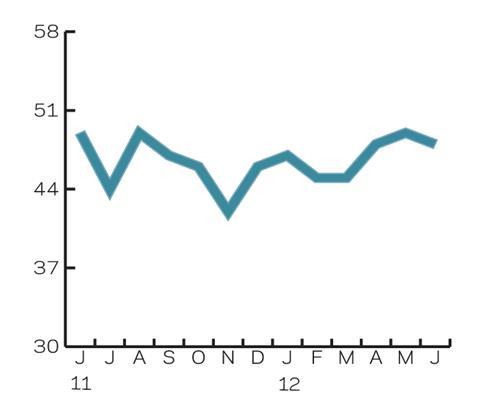 CFR’s Leading Construction Activity Indicator is predicted to increase by three points to 48 in April. The index is due to increase by a further point in May to 49 before declining again to 48 in June. 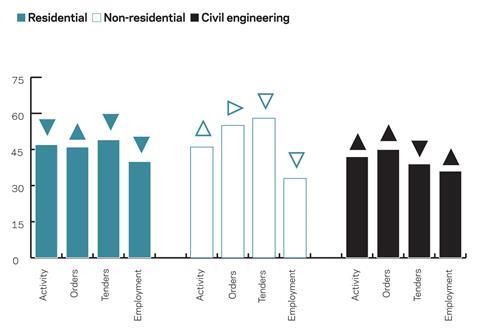 The residential sector saw the highest proportion of respondents (40%) reporting that they had enough work to keep them active for three to six months, up from 29% at the end of 2011.

Civil engineering was the only sector in which no firms reported they had more than six months work in hand. This was a similar story to three months ago but compared with 13% of civil engineering firms in March 2011.

About 14% of residential firms reported that they had more than six months of work in hand while the proportion for the non-residential sector was around 9%. 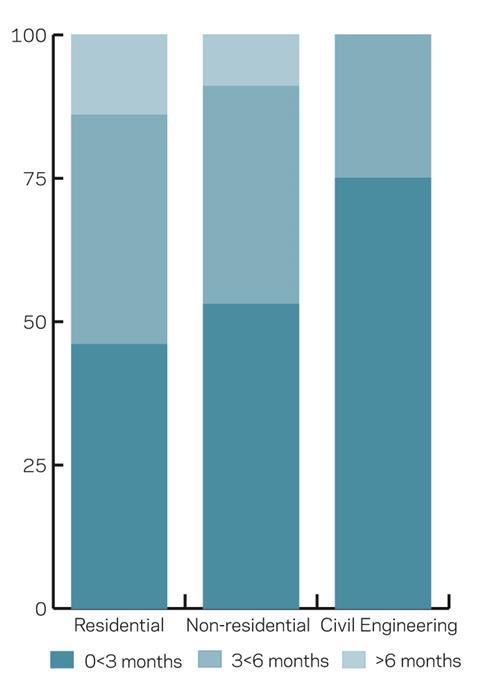 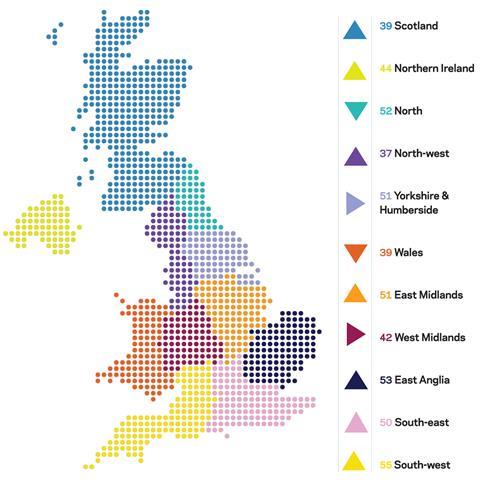 In March, both the North and Wales saw their indices decline by one point, to 52 and 39 respectively.

The indices for seven of the 11 regions and devolved nations increased in March. Northern Ireland (44) and East Anglia (53) both saw their indices rise by five points; however, only the latter region managed to move above the no-change mark of 50.

Moreover, this was the highest reading for East Anglia’s index since November 2010.

The index for the South-west rose by three points to 55, the highest reading of all the regions and devolved nations.

The East Midlands, South-east and Scotland all saw their indices increase by two points while the North-west’s index edged up by 1 point to 37, a four-month high.

The indices for Yorkshire and Humberside (51) and the West Midlands (42) were unchanged although the former region remained above the no-change mark of 50 for a second consecutive month.

The UK index, which includes firms working in five or more regions, remained unchanged at 53.