Activity growth in the sectors was positive this month, as the residential and non-residential indices both increased, and the total activity index recorded a significant improvement. Experian Economics reports

In February, the total activity index recorded a significant improvement of 10 points and reached 56. In contrast, the repair and maintenance (R&M) index lost a point to 38. This marked its fifth consecutive month of contraction. Activity growth in the sectors was positive this month, as the residential and non-residential indices both increased. The residential activity index went six points up to 57, and the non-residential index moved from negative territory with a 13-point surge, thus standing again at 56. Construction orders and tender enquiries exhibited diverging patterns in February, with the orders index recording an 11-point increase to 76, and the tender enquiries one falling by three points to 60. The residential orders index increased by nine points to 73 and the non-residential one by 12 points to 88. The residential tenders index ticked up by two points to 62, and the non-residential one was down by one point to 60. The tender prices index recorded four points of growth in February in line with the general upward trend in the three-month moving average. The employment prospects index gained three points to 54 – little changed on average since August 2016 – pointing to slow but stable growth in construction employment. February’s figures indicated construction firms faced fewer activity constraints, with 41% of respondents reporting they were experiencing no constraints – an increase over January’s results. Accordingly, the number of respondents reporting constraints was less than the previous month. Insufficient demand remains the main limitation, as reported by 23% of the respondents. Financial constraints affected 14% of the respondents, and labour shortages 10%. These figures were all lower than the corresponding values of the previous month. 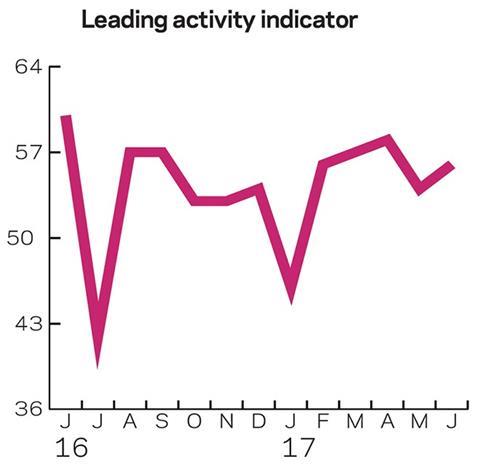 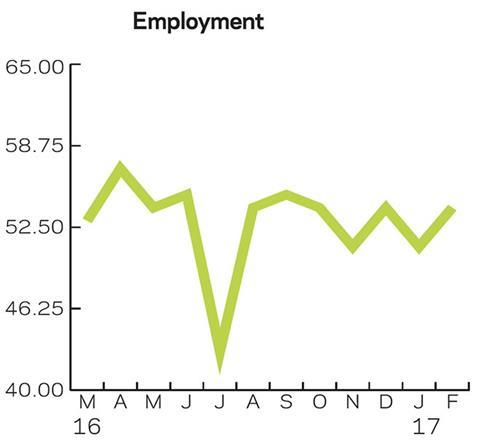 CFR’s leading construction activity indicator returned to positive territory in February and reached 56. This figure was 10 points up from November’s 46. The expectations are that the indicator will stabilise close to its February level in the following months. 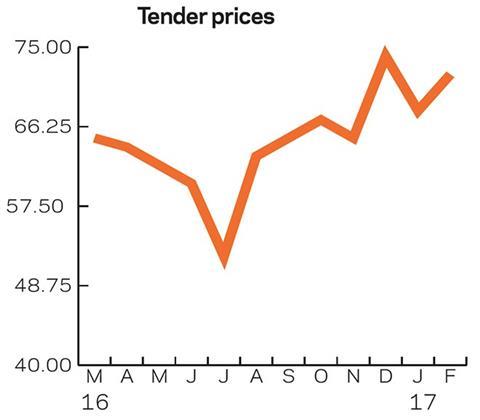 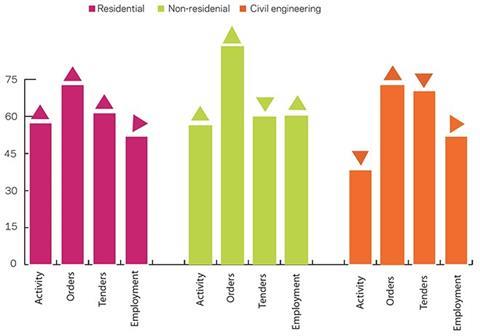 In the civil engineering sector, the gradual trend seen throughout 2016 continued in December as well. Last March, only 11% of respondents reported three to six months work in hand, while by December, this percentage had tripled. The remaining two-thirds of respondents reported zero to three months work in hand. Next month’s results will show if these trends have continued over the past year. 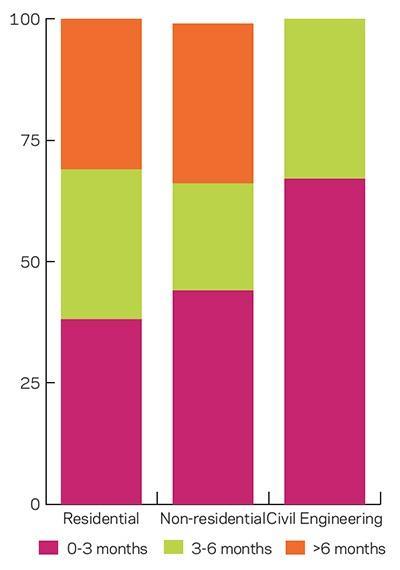 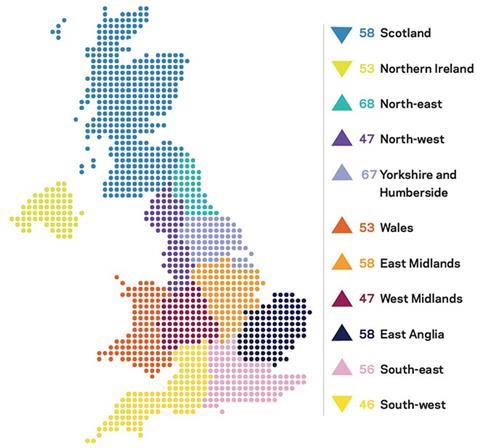 The regional figures in February showed mostly positive developments. Eight regions recorded increases in their composite indices. The best performing regions were the North-east (recording growth of four points to 68) and Yorkshire and Humberside (surging 20 points to 67).

Strong growth was also enjoyed by the West Midlands and the North-west, although both remained in the negative territory. Wales’ index gained 12 points, thus bringing the region back into positive territory after leaving it in May 2016.

The South-west’s and Northern Ireland’s indices performed much worse, losing 11 and 10 points respectively, bringing the South-west down into negative territory for the first time since October 2015.

The UK composite index fell by two points to 60, yet remained on the expansion side.