Activity and new orders are losing momentum overall although the non-residential sector is holding up well. Tender enquiries, meanwhile, are gaining strength in all sectors but residential. Experian Economics reports

The total activity index lost a point over the past month and posted 56 in January, which still marks its fifth month in positive territory. R&M activity, however, decreased notably, as its index dropped to an all-time low of 29.

Despite two of the three activity indices losing some momentum, none of the three sectors showed any actual fall in activity. The residential index lost 10 points to settle at the no-growth bound of 50, while civil engineering also indicated a slow-down, dropping eight points to stand at 53. The non-residential sector was the only one to improve – its index rebounded by 14 points to 61.

Overall, both orders and tender enquiries remained in positive territory. The orders index lost some momentum as it dropped nine points to 55. The enquiries index, on the other hand, added two points to reach 56.

All three sectoral orders indices lost momentum, with two remaining on the expansionary side and one dropping into the negative. The largest fall was in civil engineering, which dropped 12 points to 44. The non-residential sector index stood highest, at 59, despite a six-point loss. The residential orders index was also down, by 10 points, to 55.

Employment prospects remained expansionary, with the index gaining four points to reach 57, in its 17th month above the no-growth bound.

The share of agents facing no constraints to activity fell further, from 33% in December to 23% in January, against a rise in respondents reporting insufficient demand – up nine points to 30%. Financial obstacles were another major constraint, rising from 16% to 24%. Bad weather meanwhile took its largest share over the last nine months, at 11% (up from December’s 4%).

The activity index remained on the expansionary side after it ticked down by a point to 56 in January. It is expected to lose some more momentum over the next few months but remain above the no-growth bound at around 52-53. 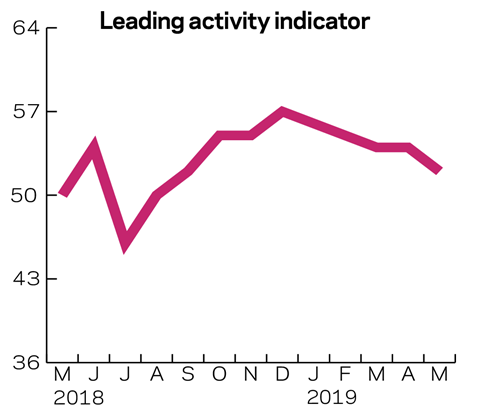 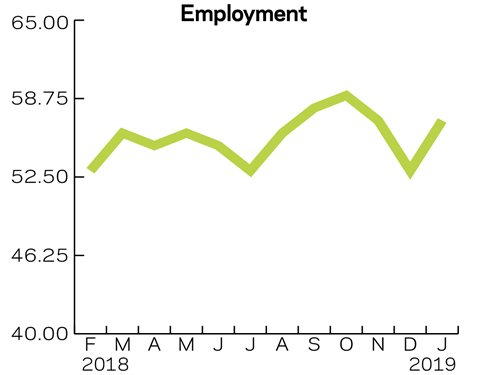 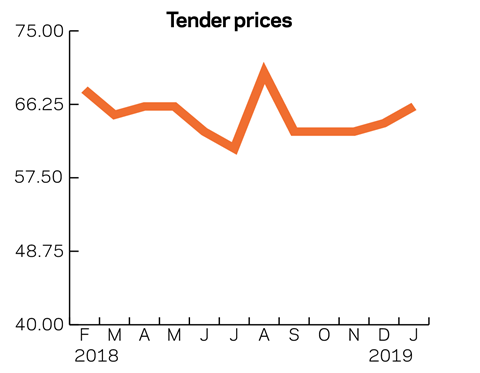 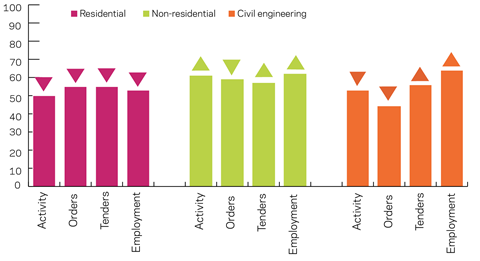 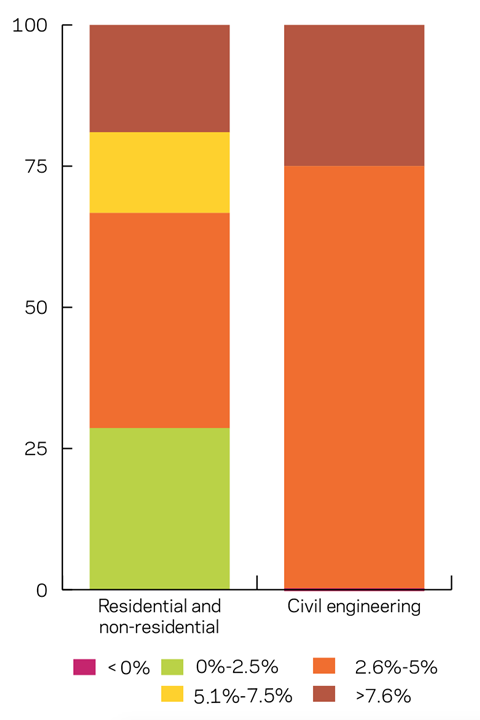 Labour costs in the residential and non-residential sectors appear to have eased slightly over the past three months. No agents in these sectors reported a decrease in costs, but the share of those who saw an increase of up to 2.5% expanded to 28.6%, up from 22.2% in October 2018. This happened on account of a decrease in the share of agents experiencing cost growth exceeding 5%, which fell from 39% to 33%.

The share of respondents reporting labour costs increasing at a rate within the band of 2.6%-5% remained almost unchanged at 38.1% (against 38.9% in October). Reported labour cost dynamics in the civil engineering sector, however, speak of the exact opposite to the picture in the residential and non-residential sectors. Compared with October (and also July, the previous time we reported labour cost figures), when respondents reported labour costs growing at a rate within the margin of 2.6%-5% over the previous three months, in January that share decreased to 75%. The remaining 25% have reported experiencing cost growth exceeding 7.5%. 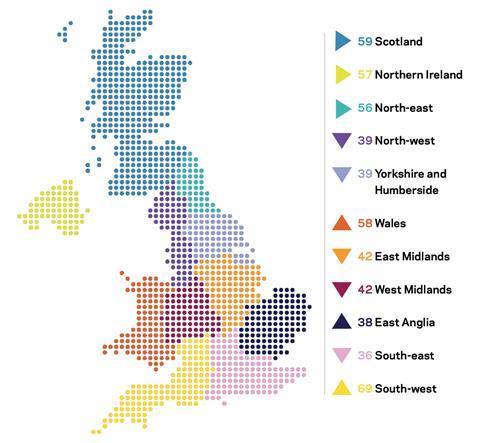 The South-west gained two points over January and remained the best-performing region, with an index of 69. Scotland came second, its index flat at 59, with Wales third at 58 after gaining three points. Two other regional indices retained their December levels – Northern Ireland and the North-east, at 57 and 56, also remaining on the expansionary side.

The index for Yorkshire and Humberside recorded the largest drop, losing 15 points to plunge into negative territory at 39. The South-east, however, stood lower, after its index decreased for the fourth consecutive month and reached 36, an all-time low.

Second to last came the East of England, gaining a point to 38, while the North-west lost five points over January to hit 39.

Both Midlands indices fell to 42, after the East Midlands lost 13 points for a second month and the West Midlands dropped 11 points over January, marking the third month of decrease in its index.

The UK composite index added a point from December to reach the no-growth bound of 50, reflecting the balance between gains and stability in some regions and downturns in others.