The total activity index remained flat in November, above the no-growth bound at 55. The R&M activity index, however, plunged 22 points into negative territory to stand at 38.

Orders and tender enquiries remained on the expansionary side despite losing some momentum. The orders index ticked down by a point to 58, while the tender enquiries index dropped six points to 53, a nine-month low.

All sector order indices remained in positive territory. The non-residential sector was the only one that saw its index climb, by six points to 60. The residential and civil engineering sector indices shared a level of 58 after losing four and 17 points, respectively.

All three sectoral indices for tender enquiries fell in November. The largest drop was in the civil engineering index, down 41 points, but remaining in positive territory at 53. The residential index also remained on the expansionary side, at 59, after losing three points. The non-residential tender index, however, fell by six points, settling below the no-growth bound at 47.

Tender prices remained flat in November but well above the no-growth bound at 63 – marking the 28th month of an index above 60 points.

The employment prospects index ticked down by a point to 58, marking its second-highest level over the last 14 months and its 16th consecutive month of positive movement.

In November the share of respondents facing no constraints was lower relative to October – down from 47% to 38%. The share of agents reporting insufficient demand grew from 19% to 22%, thus retaining the lead among the constraining factors. The second most reported group of obstacles was financial constraints, marked by 17% of the agents (up by two percentage points). Next were labour shortages, which seem to have reduced, as 9% of respondents reported facing such problems compared with 16% in October. 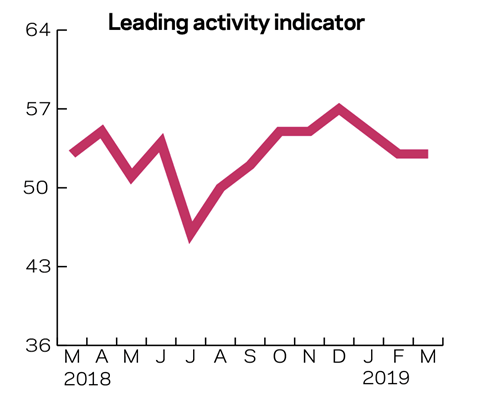 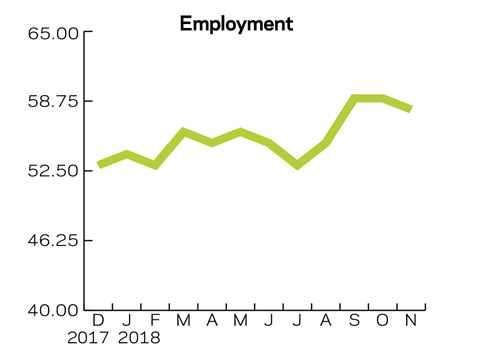 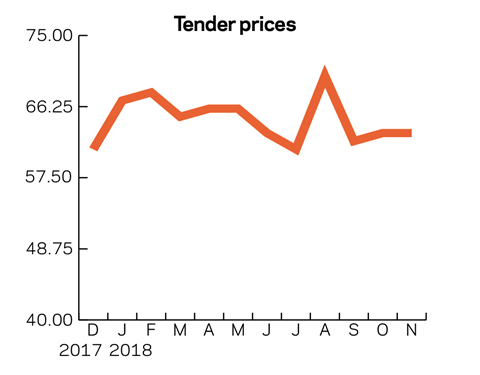 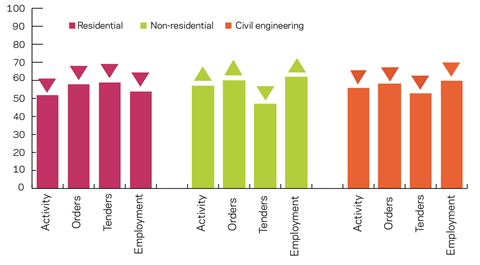 The total activity index in November remained the same as its October level, at 55. The index is expected to gain some momentum initially then gradually lose a few points over the next four months, remaining in positive territory throughout. The developments in R&M activity over the past month were negative – as the index fell under the no-growth bound at 38, following a 22-point drop.

Experian has rebased a number of its indices from this month to better account for volatility, using the long-term averages in the historic data. While this means that the levels throughout history will be different for many of the indices, the trends remain the same. 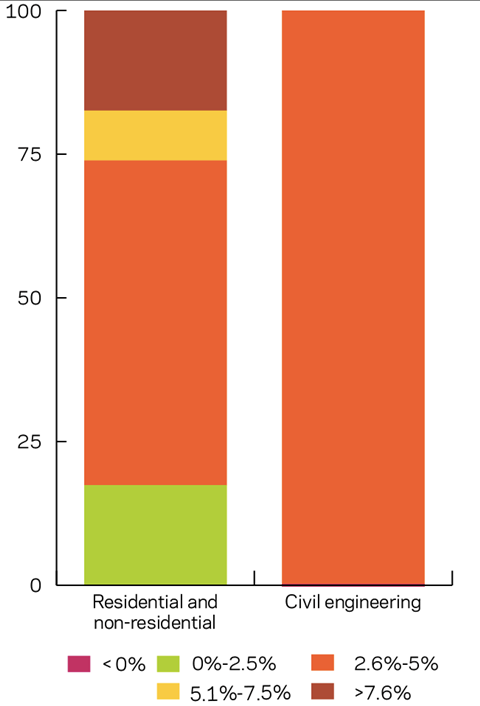 Similar developments were observed in the civil engineering sector. The structure shifted to the lower cost growth bounds. Compared with August, when half of the respondents reported costs growing by 2.5%-5% and the remaining half marked costs exceeding 7.5%, all of the respondents reported material costs growing within the bounds of 2.5%-5% in November. 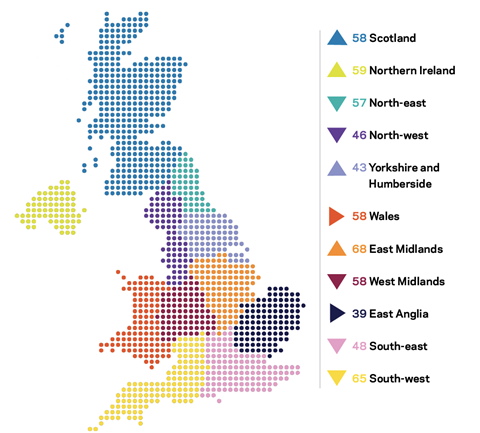 The East Midlands was the best performing region, with an index of 68 in November, up by eight points. Second came the South-west after losing some momentum, with an index of 65. Northern Ireland also saw a positive development, as its index gained a point to reach 59. The index for Wales remained flat at 58, allowing Scotland to catch up after gaining two points over the past month.

The East of England had the lowest index, at 39, retaining its October level. Yorkshire and Humber was also in negative territory, at 43, despite gaining some points in the last three months. The other two regions below the no-growth bound in November were the North-west and the South-east, losing four and five points, respectively, to hit 46 and 48.

The largest drops were recorded in the indices for the North-east and the West Midlands, losing seven and six points, respectively, but both remained on the expansionary side at levels of 57 and 58.

The UK composite index ticked down by a point to 53 in November, the second-highest level over the past five months. This also marked the third consecutive month of growth in the UK.