This year’s Top 200 consultants survey shows that staff numbers and salaries are finally climbing. But it also warns not to let the optimism go to your head 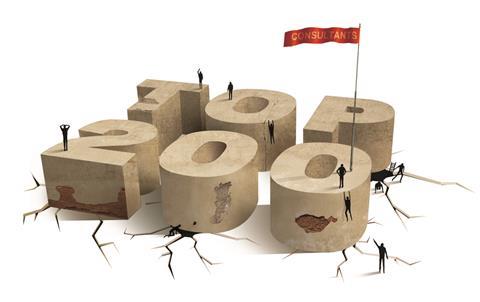 Finally. Some good news. After three of the toughest years in construction’s recent history, a few chinks of light are shining through. Comprehensive Spending Review and public sector cuts aside, the results of this year’s Top 200 consultants survey reveal a move towards a rise in staffing levels, an increase in wages and higher fee incomes.

“We are still all very cautious,” says Hanif Kara, design director of structural engineer AKT II. “But for the first time in three years we have started recruiting again. Last month we took on 15 graduates and some senior engineers. That’s a 7-8% increase in staff numbers. We haven’t been happier for a long time and there is definitely light at the end of the tunnel.”

But while the statistics show some heartwarming upward trends, nobody should be in any doubt that the outlook for 2012/13 is very challenging. Public sector cuts will continue to have a real impact on the industry’s workload next year and consultants will have to fight the temptation to let the first signs of optimism eclipse a realistic approach to the next 12 months: “There is certainly some resurgence in some areas,” says Jonathan Goring, chief executive of Capita Symonds. “But the market remains tough and if you look out of your window there are still no tower cranes on the horizon, so let’s get real about it.”

This year, then, it’s all about perfecting the balancing act. Consultants will have to juggle being positive enough to take advantage of opportunities on the horizon, without letting some of the more upbeat statistics and market signals lull them into a false sense of security.

Here we weigh up where the opportunities and pitfalls lie and our survey results on page 40 reveal the fortunes of the top consultants in the UK over the past year.

He explains that this has been made possible as fee incomes per UK staff member have increased. In 2011 they rose by around 3% after falling in 2010.

In terms of a rise in the level of recruitment, Davis Langdon, Aecom and AKT II are among a number of firms who are now reporting staff increases. AKT II’s Kara says: “Most firms have spent the last three years working out how not to make people redundant. Now we are looking at how we will get the work done. And that requires bringing more people on board for the first time in a very long time.”

Nicholas Thompson, chief executive of Aukett Fitzroy Robinson, adds: “It has been a challenging couple of years in staff terms. Consultants have had to reluctantly make redundancies and pare back salaries as workloads dropped away. Now, though, we are reinvesting in the architectural sector and are growing our business with part 1 and part 2 graduates. We are now targeting 50% growth over the next two years.”

It would be foolish to think that a few positive signs signal a complete turnaround in market conditions; a hope that most consultants are likely to see as unrealistic.

It is widely assumed that 2012/13 will remain tough, particularly in the public sector as cuts continue to take hold and projects come to an end. This means that competition for work in the private sector, particularly within the London office and residential markets, will remain extremely tough.

Demonstrating value for money and having a water-tight forward strategy will remain key to survival. Jeremy Horner, global chief executive at Davis Langdon, explains: “One needs to be realistic. In June or July I would have said that things had really stabilised and were nicely in place to see some real growth. But the financial market has changed since then and become rather desperate. Time and time again we hear that what we see happening in the financial markets is followed by what happens in the real world and this could mean real volatility ahead.

“This does not mean there won’t be good news in 2012/13 and it doesn’t mean companies won’t see successes, but they will come from taking control of our own destinies. We certainly won’t be relying on the macro economy to pick up work, we are going to have to go out there and find it ourselves. This means being 100% clear about where the work is, where the growth will be and gearing strategy and staff towards [making] the most of these opportunities.”

The overarching message from this year’s Top 200 consultants survey, then, is that the future still looks difficult, but now we’ve reached a point where glimmers of positivity are finally starting to illuminate the road ahead.

Competition will remain fierce and building close relationships with clients in carefully targeted growth markets - a strategy adopted by Arcadis that resulted in an entire company reorganisation (see our interview) - will be vital for survival.