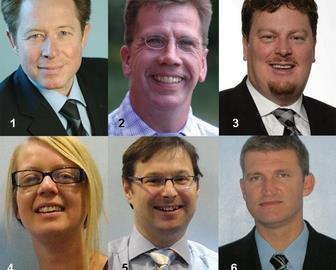 Olivier Van Houtte (1) is the new Europe president for lighting company Havells Sylvania. He joined from tooling firm Stanley Works, where he was vice-president of strategic planning and integration.

Mike McDonald (2) has joined Costelow Engineering as joint owner and commercial director. He was formerly managing director of Elson.

Morgan Professional Services has appointed Ken Hall (3) as head of mechanical and electrical engineering in Scotland. Glasgow-based Hall was previously with Rybka.

Caroline Bowie (4) has joined manufacturer Durapipe from Saint-Gobain Abrasives. She is brand manager for fuel systems, and works out of Uttoxeter. Durapipe has also appointed Jonathan Phillips (5) as a brand manager for new product development, based in Cheshire. He will link the innovations and marketing departments.

David Tyson has become Midlands executive director at Clarke Bond. Tyson is to develop the consultancy’s design-led structural engineering service with a focus on facade engineering and low-carbon building design.