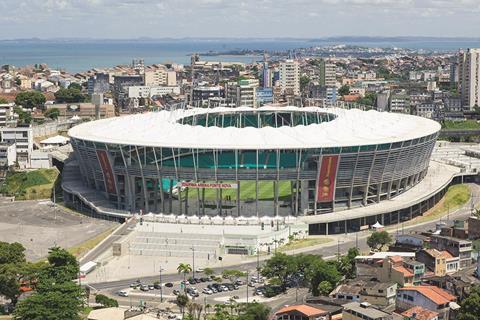 The new “nova” stadium replaces the original Estádio Fonte Nova built in 1951. A devastating terrace collapse in 2007, which killed seven spectators, led to the stadium’s demolition in 2010 and its reconstruction into its current form. Ninety-two per cent of the demolished stadium was recycled for use in its replacement and construction took 32 months. The new stadium is a multifunctional venue and has also been purpose-built for non-football events such as concerts. The new design maintains the traditional horseshoe configuration of Brazilian stadiums, as opposed to the four-sided quadrangle common in England. This maximises airflow within the stadium bowl and allows views directly onto the pitch from outside. The roof is composed of translucent membrane held in tension by a spoked-wheel frame, which also supports vertical masts. With a weight of just 45kg/m², the roof is one of the lightest stadium roof structures in the world.