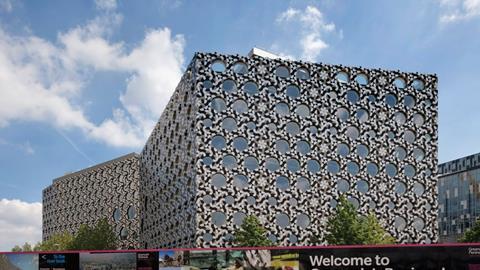 Shortlisted for Public Building Project of the Year: Ravensbourne College refuses to be merely another building in the shadow of the Millenium Dome

﻿It is always difficult being a neighbour to an iconic building and the monumental scale and unmistakable silhouette of the London’s Millennium Dome makes the task no less difficult. But Foreign Office Architects’ Ravensbourne College has some tricks of its own up its sleeve and is by no means a building satisfied with blending into the background. Flamboyantly wrapped in 28,000 anodised aluminium tiles, which form a tessellated, geometric pattern across its entire facade, this is a building that celebrates the creative arts and crafts heritage of its occupant by forging an esoteric architecture every bit as remarkable as that it lies next to. The relentlessly abstract facade pattern conceals any trace of the structural composition behind it and even the strips of circular windows employ various sizes and positions to enhance the sense of optical disorientation. The interiors play the same game with two chasm-like atriums - industrially finished with exposed concrete surfaces and metal grilles - spanned by a seemingly impenetrable vortex of levels, bridges, staircases and ramps. Ravensbourne College is an eccentric and enigmatic riposte to convention.