The following chart shows how Davis Langdon’s index series, reflecting cost movements in different sectors of the construction industry, have fared since 2000, with the movement of the consumer prices index for comparison. 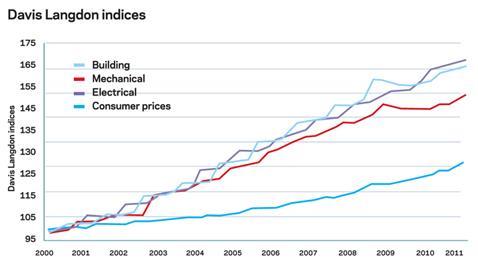 Inflation in the building cost index remains below its long-term average because wage rates remain frozen. However, materials prices surged again at the beginning of 2011, sending the index upwards.

Inflation in the mechanical cost index is now back to its average level for the last decade and has been on an upward trend for five quarters, fuelled most recently by a sharp rise in materials prices since the beginning of the year.

Electrical materials price inflation remains close to 10% but, with labour rates frozen, year-on-year inflation is at its lowest level since 1999.

The consumer prices index remains at more than double the government’s target and is forecast to climb further before heading back towards target
in 2012.

Price adjustment formulae indices, compiled by the Building Cost Information Service, are designed for the calculation of increased costs on fluctuating or variation of price contracts. They provide useful guidance on cost changes in various trades and industry sectors and on the differential movement of work sections in Spon’s Price Books.
Over the last 12 months between May 2010 and May 2011, the 60 building work categories have recorded an average rise of 4%, a decrease from 4.5% three months ago.
The largest price increases over the last year have been:

Steel and metals are the common feature of the work categories above that have seen the largest cost increase over the last year. Steel prices rose again at the beginning of the year as manufacturers reacted to raw material price rises. Copper prices rose by two-thirds in the second half of 2010 but have been in decline since February.

Some of the more traditional trades have seen little or no cost movement over the last year:

Materials: Inflation soars and input costs rise, while output prices are struggling to stay on track

CPI has now been above the government target of 2% for 17 consecutive months and 4% or higher since January. January’s rise in VAT was estimated by the Office for National Statistics to have added 0.76% to the index. The retail prices index continues to record a higher rate of inflation, 5.2% in April.

The increase in input costs is at its highest since September 2008, driven in large part by the rise in oil prices, up 38% over the last
12 months.

The index surged 2.6% in April alone. Excluding the food, beverages, tobacco and petroleum industries (FBT&P), other industries’ input costs still rose 12.2% over the last year, double the rate of six months ago. In particular, industry has suffered from the following price increases:

There is an ever widening gap between industry input costs and output prices. Output prices are rising but at a much reduced rate compared to input costs.

Metals prices rose strongly from last June as the global economy picked up. But political uncertainties including unrest in the Middle East put a break on the trend and most metals prices have seen some retrenchment during the spring.

Materials price increases for the construction industry over the last year are detailed below:

Overall construction materials prices rose by 9.3% over the year to March 2011, increasing sharply since last December, in large part due to a renewed surge in steel prices.

Mechanical and electrical services materials prices accelerated at the turn of the year, reaching annual inflation rates of 9% and almost 11% respectively, in response to steel and copper price increases. Over the last month or two prices have moderated a little as metal prices have fallen.

Materials showing the most significant price movement variation from the average over the last 12 months are shown below:

The increase in the price of gas oil fuel for construction plant reflects the rise in oil prices that occurred from last October before its recent slippage. Steel products reflect the increase in world steel prices that occurred in the first few months of the year. The decline in concrete prices reflects the difficult economic conditions faced by the construction industry.

Plumbers in England and Wales started the year by securing a 3% wage increase from 3 January but their colleagues in Scotland and Northern Ireland will have to wait until 6 June to receive a more lowly 2% rise, their first increase for two years.

Electricians in England and Scotland benefited from a wage increase in January 2010 and have so far been unable to agree any increase in terms for 2011.

Operatives employed under the Working Rule Agreement of the Construction Industry Joint Council have seen their wage rates frozen since June 2008. Negotiations are currently under way between the employers’ and employees’ sides regarding a possible increase for 2011/12.

It is unlikely that any increase will be agreed for the normal anniversary date of the end of June but there are hopes of a small wage rise later in the year.

But agreement has been reached between the Federation of Master Builders and the Unite union that extends that agreement until 12 September 2011, when basic hourly rates of pay will increase by 1%. Skill rates, apprentice rates and benefits will remain unchanged.

The Joint Industry Board for the Plumbing Industry in Scotland and Northern Ireland agreed in January 2010 that rates of pay and allowances would be frozen until June 2011 when all rates and allowance would rise by 2%.

From 6 June 2011, the following basic rates of pay come into effect: