Construction inflation is continuing to fall across the board in the second quarter while many wage agreements remain frozen. Peter Fordham of Davis Langdon, an Aecom company, reports 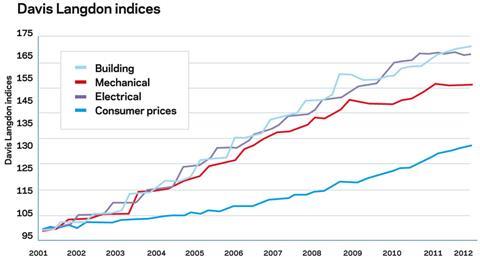 Small rise (0.3%) between the first and second quarters of 2012 but year-on-year increase lowest for over two years.

Annual inflation rate continues to fall towards government target though some head winds may slow progress.

Price Adjustment Formulae indices, compiled by the Building Cost Information Service (previously by the Department for Business Innovation & Skills), are designed for the calculation of increased costs on fluctuating or variation of price contracts. They provide guidance on cost changes in industry trades and sectors and on the differential movement of work sections in Spon’s Price Books.

Over the last 12 months between July 2011 and July 2012, the 60 building work categories recorded an average rise of just 0.6%, down from 2.3% three months ago and continuing the downward trend of recent quarters since peaking at 5.2% last October.

Price movements in most work categories have been benign over the last year but those showing the highest increases have been:

Coated macadam pavings leapt in price at the beginning of the year, mirroring the jump in oil prices in February.

The largest decreases have occurred in:

These are largely the same work categories that had started to register price declines three months ago but the level of price reduction has increased, reflecting recent falls in steel and other metals prices.

Oil prices are on the rise, while lack of international demand is depressing metal prices

The index rose by only 0.1% between June and July but the corresponding period of 2011 was flat, resulting in an increase in the annual rate of inflation. The downward trend is expected to resume next month but rising oil prices may limit the fall.

Input costs fell for three consecutive months before a slight recovery in July, as oil prices returned to an upward trend. The annual rate of change remained negative for the second month, a dramatic change from the +18.5% annual change recorded in July 2011.

The narrower measure, for manufacturing industry excluding food, beverages, tobacco and petroleum industries, fell for the fourth consecutive quarter in July. Input costs have now fallen 3% since March. The cost of imported metals fell 8% over that period.

Industry output prices in July held their level of June but the annual rate of increase declined for the fifth consecutive month. The same pattern was recorded by the narrower margin (excluding food, beverages, tobacco and petroleum).

Materials price increases for the construction industry over the last year (to June 2012) are detailed below:

Overall, construction materials rose by 1% over the year to June, progressively down from 7.2% last December. Prices fell sharply in June, particularly for non-housing new work, as items such as concrete reinforcing bars fell in price in response to lower worldwide commodity prices.

Prices for materials for mechanical and electrical services installations are now lower than a year ago. This reflects both the fall in metals prices and the higher value of the pound reducing the cost of imported components over the last year.

Some construction materials have still shown significant price increases over the last year:

But may also have fallen:

Weekly earnings are marginally higher, but many wage negotiations have stalled

The parties to the Construction Industry Joint Council (CIJC) have failed to reach agreement on the basic pay rates under the Working Rule Agreement for 2012/13 so the existing rates for 2011/12 remain in place. Fare, travelling and subsistence allowances increased from 2 July in line with the March Retail Prices Index i.e. a rise of 3.6%.

The wage rates agreed by the Building and Allied Trades Joint Industrial Council (BATJIC) last year were intended to apply from 12 September 2011 until 10 June 2012. However negotiations between employers and unions broke down without further agreement.

Plumbers in Scotland and Northern Ireland were also expecting a pay review in June this year but no agreement has been reached and their rates remain as those determined from June 2011.

Heating and ventilating operatives have had no increase in wage rates since October 2010. Unite has submitted an ambitious claim for a minimum 10% increase in hourly rates from the start of October 2012 as well as a reduction in the working week and increased overtime rates. The employers’ side remain silent on the issue.

Electricians’ wage rates have been frozen since January 2010. Unite has called for a 7% wage increase from the start of 2013. Talks have taken place between the union and employers without agreement.

Wage rates for workers in the engineering construction industry, including steel erectors and scaffolders, have been frozen since January 2011. Discussions regarding NAECI 2013 and beyond have been taking place during the summer and are scheduled to continue in early September.

Demolition workers have secured a 2.5% wage increase from 20 July and their agreement provides for a further 2.5% from July next year.