Activity increased across all sectors compared with March, and most of all in civil engineering. Tender prices are also still on the rise, but new orders are growing more slowly. Experian Economics reports

The total activity index continued to improve in April, gaining two points over March’s figure at 58 points. Repair and maintenance activity, on the other hand, contracted for a third consecutive month, with the index losing four points to stand at 40, the lowest since May 2017.

Activity increased across all sectors, with the residential activity index gaining two points to 55, while the non-residential index gained four points to 63. The civil engineering index saw the biggest improvement, of 10 points, reaching a seven-month high of 66.

Both orders and tender inquiries remained in positive territory in April, despite slippage in their indices. The orders index dropped four points to return to its February figure of 67. The tender enquiries index ticked down by one point to 61.

The tender enquiry indices suggest growth in all sectors for a fourth consecutive month. Civil engineering rose 18 points to 80; non-residential gained three points to 69. Residential, however, fell seven points back to its February level of 56.

Tender prices remained on the expansionary side, with the index gaining two points to 67, marking its 21st consecutive month above 60.

Employment prospects remained positive for the ninth month in a row. The index stayed steady at 55, the highest since November 2017.

The share of agents facing constraints in April decreased, with 29% reporting no constraints on activity, a five percentage point improvement on March. Insufficient demand was again the lead constraining factor, cited by 23% of respondents. Financial constraints came in next at 19%, rising from sixth to second most significant factor.

The activity index continued climbing further into positive territory in April, reaching a seven-month high of 58 points. It gained two points over the past month and is expected to remain close to its current level in the next couple of months. Thereafter, it is expected to slow gradually but remain comfortably above the no-growth bound. 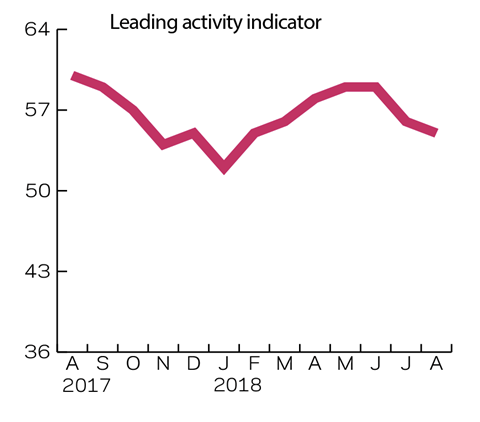 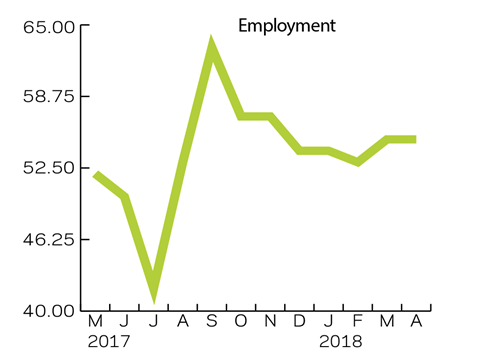 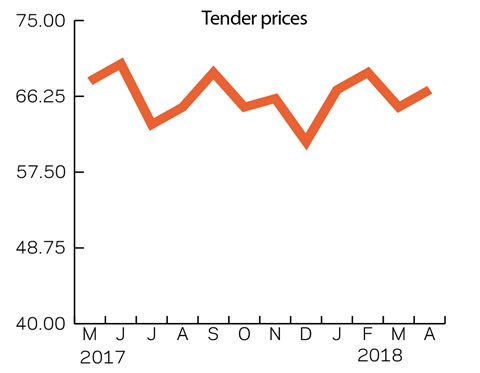 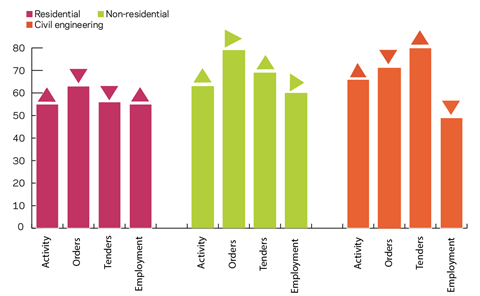 There has been a slight shift in the reported dynamics in labour costs over the last three months for the residential and non-residential sectors. The structure moved towards the lower bounds, with the share of respondents reporting cost growth exceeding 7.5% shrinking from 36% to 12%. Just under two-thirds (65%) of the agents estimated changes to be within 2.6-5%, and roughly 15% reported labour cost growth of below 2.5%. There were also participants, though quite few (3% of the respondents), that even saw a decrease in costs (relative to none in January).

Similar shifting towards lower cost growth bounds was also seen in civil engineering. In January all respondents in the sector reported labour costs changing by rates within the 2.6-5% margins. In April, the same cost growth category was reported by a third of the respondents, while the rest estimated the increase in labour costs to be below 2.5%. 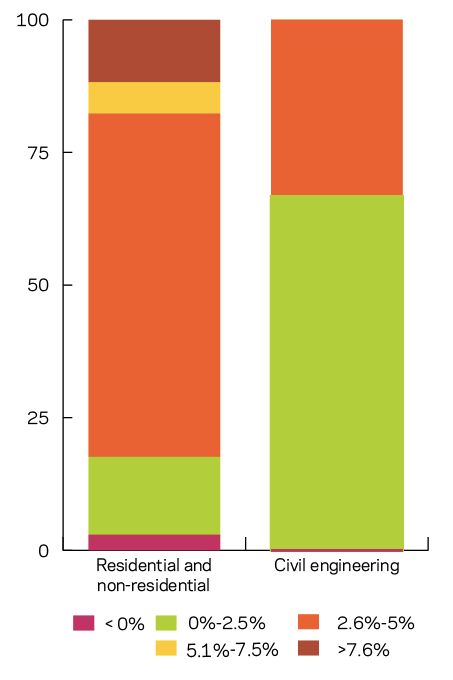 Most regions remained in positive territory in April, though two were in the negative. The UK composite index improved, with a five-point gain to 57, reflecting positive developments in the regions.

The South-west remains in the lead, with an index of 81, up from 73 in March. The South-east index also gained momentum, growing by 13 points to 72, placing it second, followed by the North-east with 66 points. The West Midlands’ index saw a marked improvement, returning to positive territory after nine months of contraction, rising 10 points to 52.

Conversely, some regions lost points but stayed in positive territory. Yorkshire and Humberside lost seven points from its index to 65, while the East Midlands index similarly fell by six points to 59. Scotland and Northern Ireland lost one and three points respectively, but stood at 59 and 60.

The North-west discontinued its negative trend of the previous two months, with its index recovering to the no-growth boundary. The East of England, however, remained in the red with an index of 44. Wales was the other region that reported contraction, after losing four points to arrive at 49. 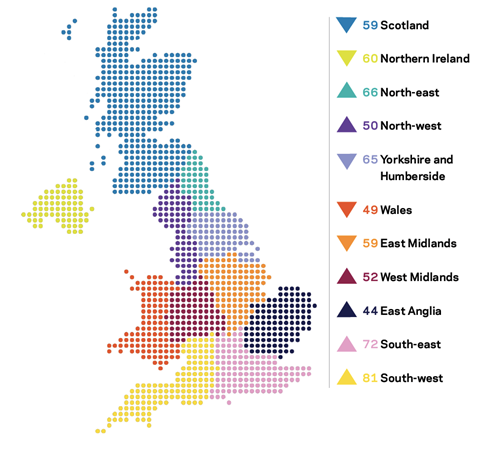