Overall activity kept falling but more slowly this month, with residential the only sector to see an actual rise. Tender enquiries also continued to fall, though orders are still rising. Experian Economics reports

The total activity index remained below the no-growth bound at 47 in April, despite adding four points. R&M activity also remained on the downside, after two-point drop to 42.

The residential sector was the only one to see a rise in activity, with an eight-point gain to 52. The non-residential activity index gained four points to 48, while civil engineering ticked down to 44.

The orders index gained seven points to 60, marking three-and-a-half years of expansion. The tender enquiries index, however, remained in negative territory after ticking up to 48.

April was favourable for orders in all three sectors. The largest gain was in residential, where the index added 10 points to reach 64. The second highest was non-residential, moving up two points to 60. The civil engineering sector index was close behind, at 58, following a five-point increase.

Non-residential and civil engineering enquiries saw similarly positive developments. The former gained four points to reach 55, while the second rebounded from negative territory by gaining seven points to reach the same level. By contrast, enquiries in the residential sector declined, as its index lost three points to 47.

The tender price index has been on the positive side since January 2014. It added another point over March’s figure to settle at 63 in April.

Employment prospects are back on the growth path with two months of expansion, after dropping into negative territory in February. The index gained a further three points in April to reach 54.

The share of agents facing no constraints returned to its February level of 38%, down from 46% in March. Insufficient demand lost some of its scope as a constraining factor, with its share falling from 37% to 26% of the respondents. Financial constraints (14%) and labour shortages (10%) also remained obstacles to construction activity, ranking as the second and third most reported constraints, respectively.

Total activity remained in decline in April as the index posted a figure of 47 despite a four-point gain. It is expected to lose some more ground over the next month before recovering, reaching the no-growth bound by August. 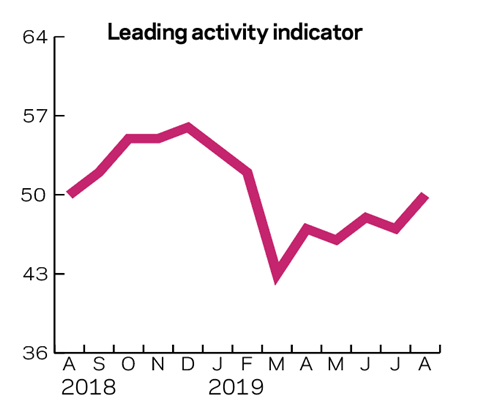 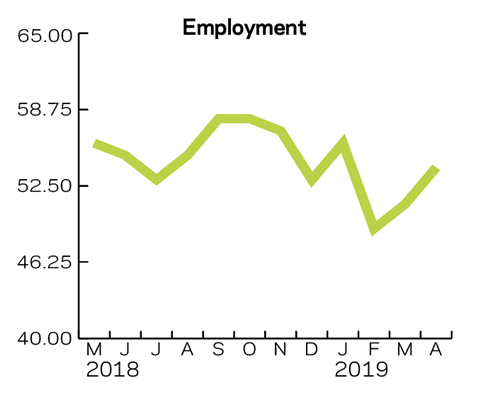 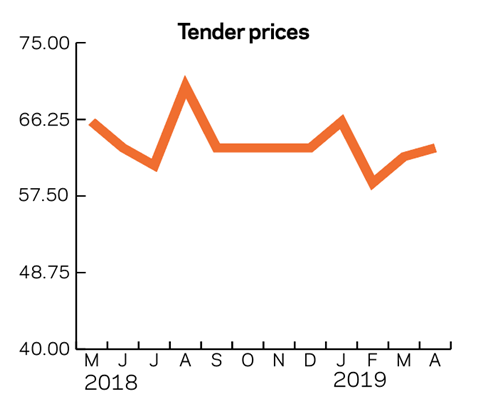 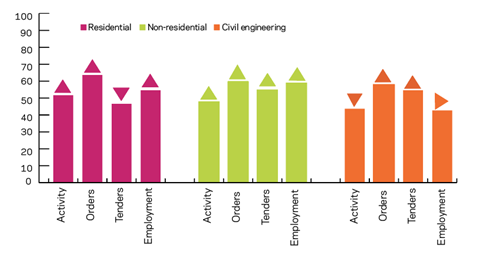 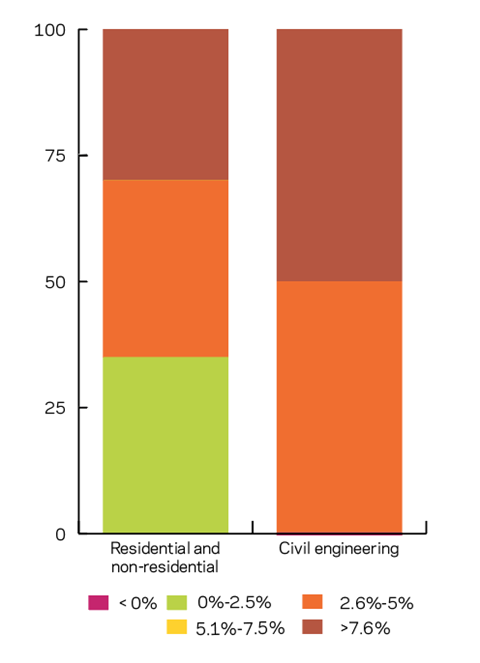 Labour costs in the residential and non-residential sectors have shifted slightly over the past three months, in seemingly divergent directions. Still, no respondents have reported a decrease in costs.

There has been a slight slowdown, according to some, as the share of respondents reporting labour cost growth up to 2.5% amounted to 35% in April, compared with 29% in January. Contrarily, the share of respondents reporting cost growth exceeding 7.6% reached 30% (compared with 19% in January). The remaining 35% of the agents in the sectors have marked labour costs growing between 2.5% and 5%, down from 38% reporting this in January.

In contrast, the developments in labour costs for the civil engineering sector in particular were clearly skewed towards the upper bounds. In April, half of the respondents reported costs growing at rates between 2.5% and 5%, down from 75% in January. This reflected the increase in the share of respondents who reported experiencing cost growth exceeding 7.5%, representing the other half of the sectors’ agents in April, up from 25% three months earlier. 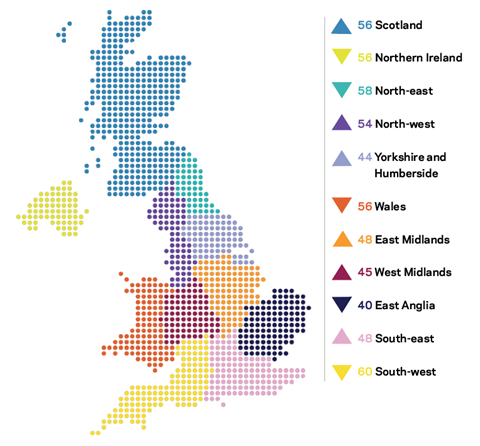 The UK composite index remained on the expansionary side in April despite ticking down by a point. Even though six of the UK regions and devolved nations saw improvements in their indices, five remained in negative territory.

The worst performing region was the East of England – it ticked down a point to 40. Even though Yorkshire and the Humber and the West Midlands both gained 15 points, they weren’t too far above – the former posted an index of 44, and the latter posted 45. The other two regions to remain in decline over April, the East Midlands and the South-east, also saw their indices increase, by 10 and eight points respectively, sharing a level of 48.