The construction activity index slides down to 58 following the previous month’s post-recessionary high, while activity by sector also takes an overall negative shape

The construction activity index stood at 58 in August, down four points on the previous month’s post-recessionary high. Activity by sector also exhibited a negative profile. Residential and non-residential activity declined on a monthly basis, the former by eight points to 60, while the latter lost four points, to reach 53. On the other hand civil engineering flattened out on the same measures, standing at 60 points.

The orders index climbed one point to reach 69 in August; this was the 17th consecutive month of above-average orders. Tender enquiries were also up, rising three points to 66, which was their highest value since the first month of this year.

The proportion of respondents indicating that labour shortages were restricting productivity fell to 14% in August, while those experiencing no constraints on activity rose to 35%. Material and equipment shortages were of little worry, with only 5% of respondents reporting them as an issue. At 31% insufficient demand remained a significant factor, although it was down slightly on a month-on-month basis. Bad weather has been of negligible concern, with <1% of respondents flagging it as an issue. Financing became more of a worry, with the figure for August rising to 12% on the same measures.

The employment prospects index gained three points to reach 58 in August. Its highest post-recessionary level, suggesting that firms are looking to increase employment over the coming three months.
Tender prices ticked up by one point in August, to reach 66. Prices remained above the 60-mark for their eighth consecutive month. 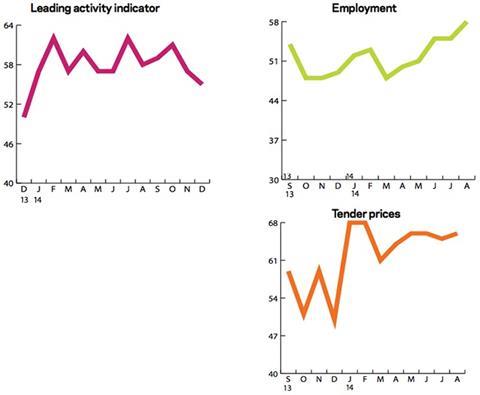 CFR’s Leading Construction Activity Indicator dropped to 58 in August. Despite this, the index has now posted above-average activity for the 20th successive period, making it the longest period of positivity since 2007. 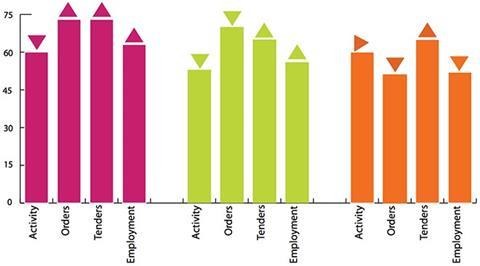 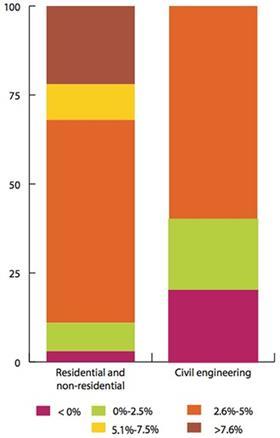 During August 2014, a small proportion of residential respondents reported a reduction in material costs (3%). Approximately 8% experienced material cost inflation below 2.5%, down from May’s reported percentage of 11%. The proportion indicating that their material costs had grown by between 2.6% and 5% rose to 57% last month, up from 45% in May. While those who saw their wage bill increase between 5.1% and 7.5% fell 10% in August, down from its figure of 21% reported three months earlier. The share of firms that experienced material cost growth of more than 7.6% edged up to 22%.

The majority of regions and devolved nations saw a fall in activity in August, with the North-east and Northern Ireland being the only exceptions. The largest declines were seen in Yorkshire & Humber and the East midlands. The former fell 24 points to 53, its lowest level since April of last year. While the latter declined by 11 points on a monthly basis to reach 55. All of the remaining areas also saw a fall in their respective indices, albeit on a smaller scale.

Despite increasing by four points on a monthly basis, Northern Ireland’s index remained below 50 for the sixth straight month.

The North-east has been one of the least volatile areas, with activity remaining broadly flat since the beginning of this year.

The UK index, which includes firms working in five or more regions, fell by eight points to 54. 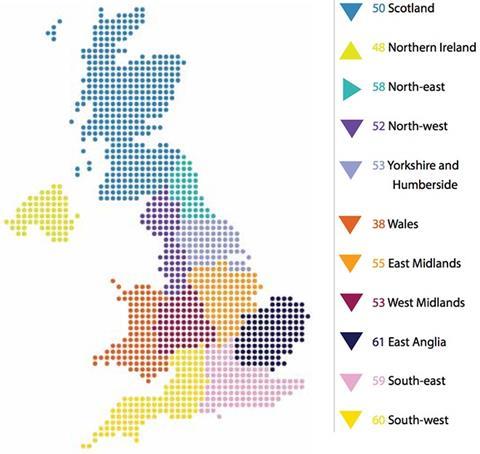