The construction activity index holds steady for the month at 62 points, meanwhile the majority of the regional indices feel an increase in activity

The construction activity index stood at 62 points in January, representing a one-point increase on a monthly basis. The repair and maintenance (R&M) activity index, however, was down eight points to 44, falling back into negative territory. Both the residential (59) and civil engineering (63) sectors experienced a decline in January, falling one point and four points respectively. The non-residential sector remained on its steady upward path, rising five points to 66.

The orders index also saw an uptick of one point in January to 70. It has now remained over 60 for 12 consecutive months. There was no movement in the tender enquiries index, remaining at 60.

On the whole, opinions regarding construction activity constraints in January fell in relation to the previous month’s consensus. The percentage of respondents posting no constraints to activity rose by four percentage points to 24% in January. This indicated an overall reduction in factors which could adversely affect activity among the panel of construction firms. Despite insufficient demand remaining the most prominent factor in limiting construction activity, its negative effect has moderated significantly when compared to its average value for the past 12 months. Bad weather became more of an issue in January, reaching its highest level since the same time last year. Those indicating that labour shortages were restricting productivity rose to 14% in January. There was little variation in the significance of material / equipment shortages and financial constraints, both dropping by just one point.

The employment prospects index gained one point in January, rising to 53. The index has now remained above 50 for 10 consecutive months, suggesting employers are still interested in boosting employment in the coming three months.

Growth in tender prices stagnated in January, with the index staying at 66 points. They have now remained above 60 for 13 consecutive months. 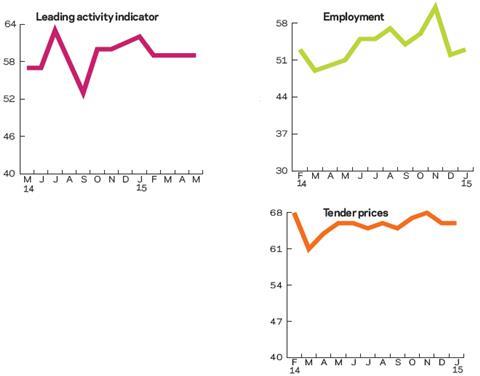 In January, the CFR’s Leading Construction Activity Indicator gained one point on a monthly basis to reach 62. It has remained at or above 50 in each month since September 2012. 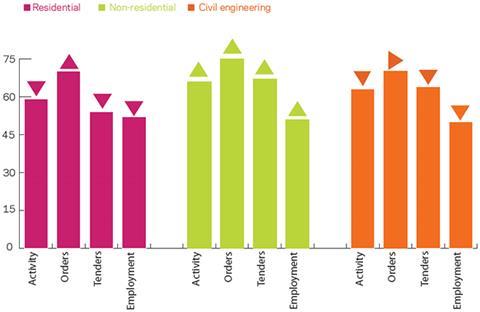 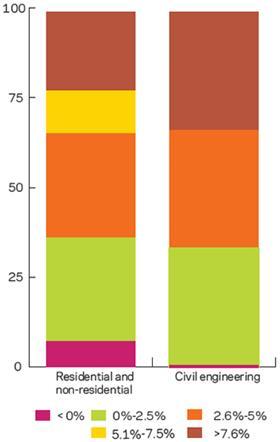 During January 2015, 29.3% of non-residential and residential respondents reported labour cost inflation in the range of 0% and 2.5%. This was the same case for labour cost inflation in the region of 2.6% and 5%. These proportions moderated by less than 1% when compared to the response three months earlier. The percentage of those reporting no inflation remained the same on a quarterly basis at 7.3%. Approximately 12.2% of respondents indicated that their wage bill had risen by between 5.1% and 7.5%, easing slightly from its level three months earlier. The share of firms who experienced labour cost growth of more than 7.6% rose to 22%.

Most regions and devolved nations saw an increase in activity in January. Despite the sustained robust nature of Yorkshire and Humberside’s (72) regional composite index, it experienced an eight-point contraction, which was the largest fall among all of the regions. The North-west (52) and South-east (57) also saw indice declines, dropping by seven and two points respectively. The North-east faired slightly better as it rose seven points to 45. Wales saw the sharpest increase, gaining 12 points to reach 66, its highest level since November 2007. Despite modest gains, both Scotland (45) and the West Midlands (44) remained in negative territory for the third month in a row. The South-west and East Midlands both held firm in positive territory. Northern Ireland gained five points to reach 55 in January, while activity in East Anglia increased by 2 points to 61.

The UK index, which includes firms working in five or more regions, held steady at 61 in January. 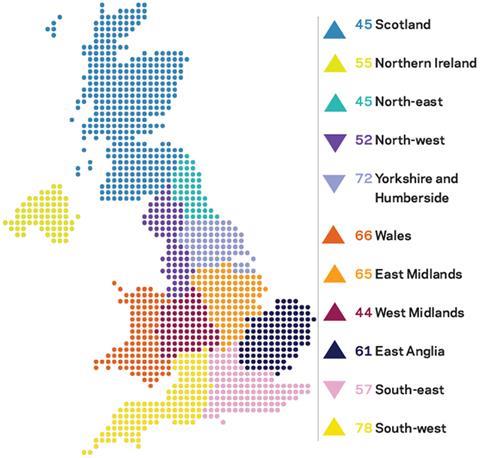