Construction activity hit its highest level in six months and the picture for contractors in six of the regions is looking more positive too. Experian Economics reports

CFR’s Leading Construction Activity Indicator is predicted to slip to 56 in June, a fall of one point on the previous month. In the following month the index is expected to remain unchanged before gaining one point to reach 57 in August. In May the construction activity index added two points taking it to 57. This was the second consecutive monthly increase and the index’s highest level for six months.

The orders index fell by one point to 51. This was the second consecutive month that the index had indicated above average orders for the time of year. Meanwhile, the tender enquiries index increased to 61, a rise of four points on the previous month and the index’s highest level since October 2007. There was littlew change from last month in each of the sectors orders indices. Both the residential and non-residential indices remained unchanged at 48 and 62 respectively, while the civil engineering index fell by one point to 57.

At 26%, the percentage of respondents indicating that they were experiencing no constraints on activity increased for the second consecutive month in May, moving in line with the rising level of activity reported. Despite this, the proportion indicating that insufficient demand was restricting activity rose to 53% - the highest level since November of last year. No respondents indicated that bad weather was restraining their activity for the first time since October 2011, while shortages of labour became slightly more of a concern at 3%. Respondents reporting that financial constraints were holding back activity fell to 15%.

The employment index remained unchanged at 46, indicating that further job cuts can be expected over the coming three months.

The tender prices index reached 51 in May, rising one point from the previous month. This indicates firms are expecting the prices they charge will rise over the coming three months. 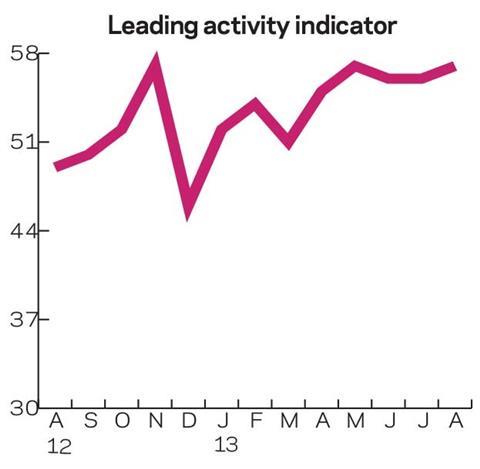 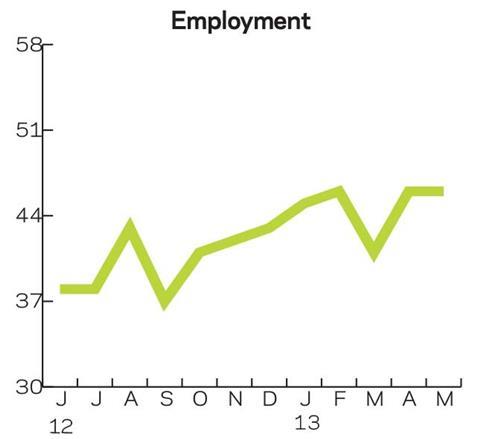 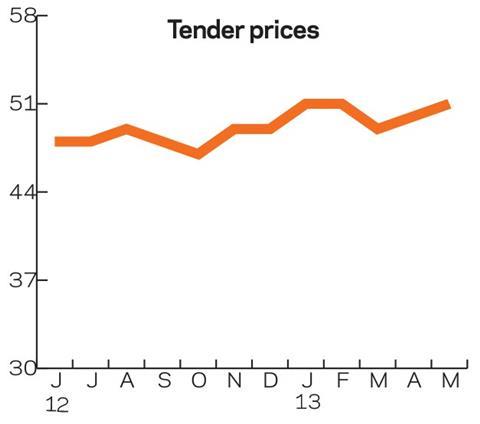 The construction activity index gained two points in May, reaching 57. This was the index’s highest level since November of last year and the fifth consecutive month in positive territory. The R&M activity index also saw a two point increase but, in contrast, remained below the no-change mark at 44. This was the fourth consecutive month that the index has shown declining R&M activity. The indicator uses a base level of 50: an index above that level indicates an increase in activity, below that level a decrease. 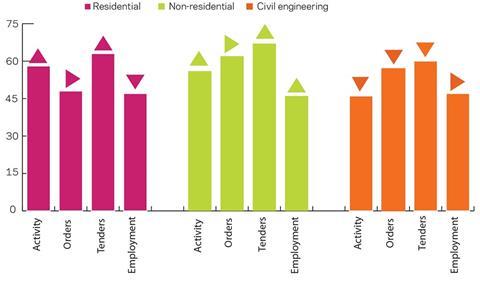 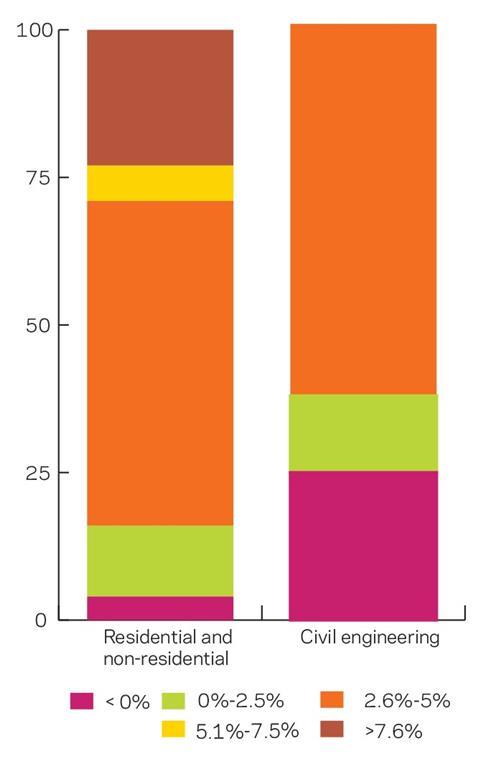 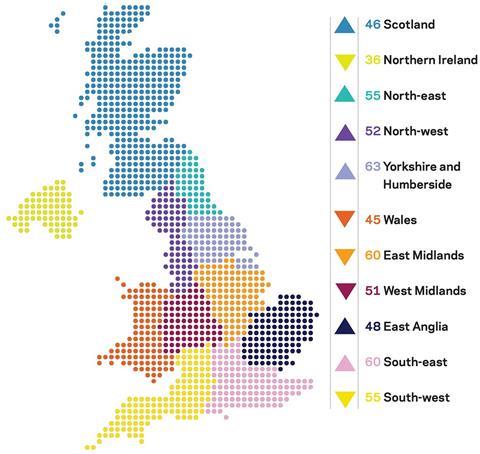 The indices for six regions saw rises in May, with Yorkshire and Humberside experiencing the sharpest increase of 13 points, moving it firmly into positive territory at 63. The North-west (52) and North-east (55) also saw movements above the no-change mark, with the former gaining five points and the latter adding six points when compared with the previous month.

Elsewhere, the index for the South-east increased by three points to 60, its highest level since December 2007. At 48 and 46 respectively, the indices for East Anglia and Scotland both remained in negative territory despite seeing rises on the previous month.

Northern Ireland saw the sharpest fall in its index, as it slid seven points to 36 - its lowest level in four months. The index for Wales edged further into negative territory, falling three points to 45. In contrast, the East Midlands (60), West Midlands (51) and South-west (55) indices all remained above the no-change mark despite seeing declines of three, one and five points respectively.

The UK index, which includes firms working in five or more regions, fell by nine points to 47.

This was the first time in four months that the index had been in negative territory.