The total activity index remained in negative territory for a third month in a row, but has been gradually climbing, adding a point over April’s figure to stand at 49 in May. The R&M index also posted 49 after gaining seven points.

The residential index lost three points to 49, while the non-residential activity index remained in negative territory after dropping two points to 46. The civil sector, in contrast, gained 13 points to reach a level of 60.

The orders index remained in positive territory despite losing three points to 57 in May, while the tenders index added a point over the past month to hit the no-growth bound of 50.

The residential and non-residential orders indices both lost momentum in May, dropping five points each to 59 and 55, respectively. The civil engineering index marked a notable improvement, surging to a nine-month high of 77 after adding 19 points.

The tender prices index has remained on the expansionary side since January 2014, and in May stayed well above the no-growth bound at 59.

The employment prospects index fell into negative territory after dropping seven points to 47, the weakest total since July 2017.

In May, the share of respondents indicating no constraints to their activity increased by 10 percentage points to 48%. This was balanced out by a decrease in the share of agents experiencing financial constraints, which lost 11 percentage points to 3%. Insufficient demand remained the biggest obstacle, reported by 25% of respondents. Labour shortages and miscellaneous factors also stood out, with 15% (10% in April) and 9% (6% in April) of respondents, respectively.

The total activity index remained in negative territory for a third month in a row after ticking up by just a point to 49 in May. The leading activity indicator is expected to remain weak and fluctuate around the no-growth bound over the next four months. 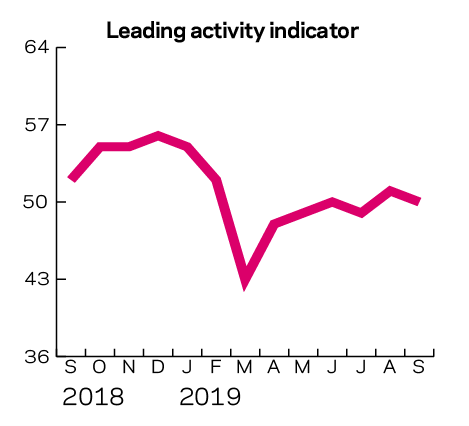 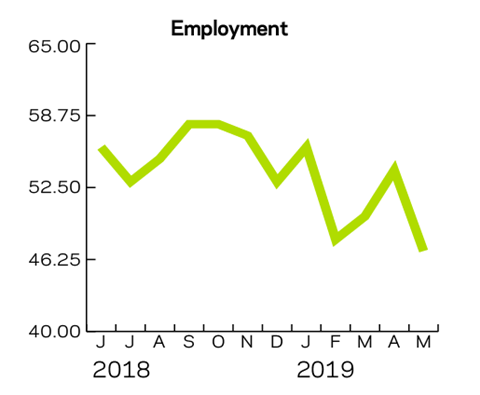 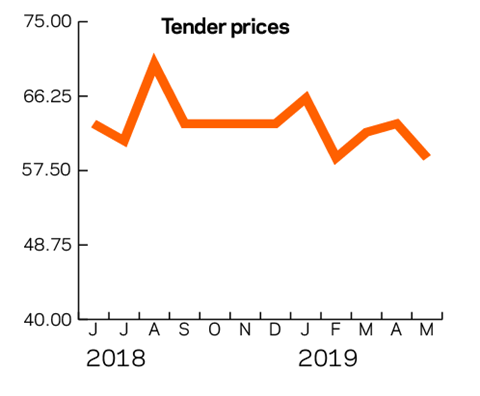 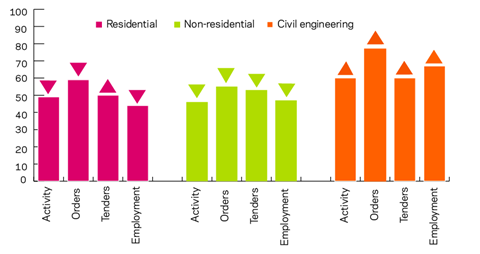 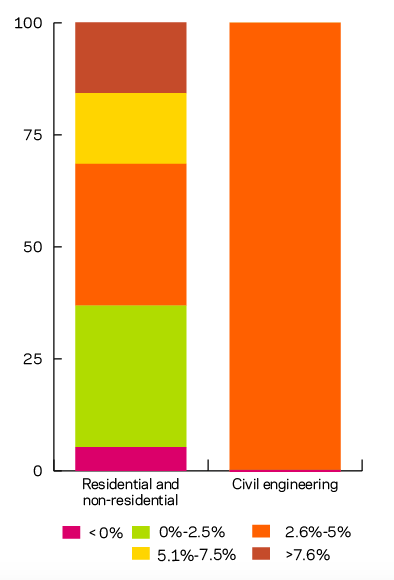 In addition, the share of agents experiencing cost growth of up to 2.5% reached 32%, up from only 6% in February. This was balanced by a decrease in those reporting cost increases of 2.6-5% (down by 23 percentage points to 32%). The higher band of the scale incorporating cost growth of above 5% also shrank, to 32%, down from 39% in February.

The developments in material prices for the civil engineering sector remained broadly unchanged since November 2018, as all respondents reported experiencing moderate rise in costs ranging from 2.6% to 5%. 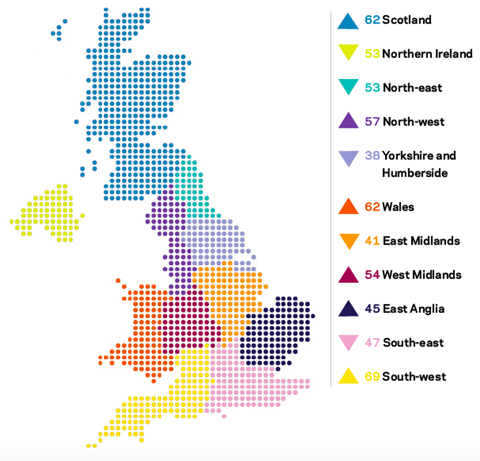 The South-west kept the lead for the sixth month in a row, after gaining nine points to 69. Wales and Scotland shared second place, after adding six points each to stand at 62. The North-west also marked an improvement, with a three-point gain to 57. The West Midlands followed close behind after gaining nine points to 54. Northern Ireland and the North-east, shared a level of 53 after their indices lost three and five points respectively.

Among the remaining four, Yorkshire & Humberside was the worst performing, falling six points to 38. The East Midlands’ index stood just three points higher, at 41, down seven points since April.

East Anglia remained in negative territory for a fifth month, at 45, despite gaining five points. The South-east has also been in decline for the last seven months, with May seeing a one-point downtick in its index to 47.

The UK composite index – covering firms operating in five or more UK regions/devolved nations – was down by 15 points to a level of 45, the weakest since August 2018.