Brighton set to give tower plans a lift 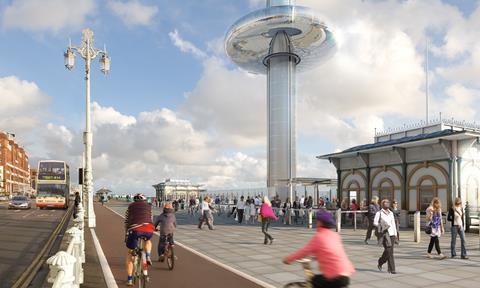 Brighton & Hove City Council could borrow almost half of the £35m needed turn proposals for a 175-metre seafront viewing tower into reality.

Marks Barfield, the architects behind the London Eye, have so-far raised £18m towards the i360 structure, but a further £3m loan from the government-backed Growing Places Fund has been agreed from the Coast to Capital Local Enterprise Partnership.

Now Brighton & Hove’s cabinet is being urged to explore the merits of borrowing the remaining funding required for the structure and making a secured loan to the developers.

If members agree in principle to explore the option at a meeting this week, the council said a final decision would be made in July allowing the project to be re-started “within two or three months and clompleted in two years”.

Officials believe the risks are low while benefits could be huge, with the completed tower expected to attract up to 800,000 visitors a year, generating more than £5m in extra spending and resulting in some 18,000 additional overnight stays in the city.

Lead member for culture, recreation and tourism Geoffrey Bowden said the city council would be making a business decision based on regeneration potential, rather than an act of charity.

“We are proposing this because the project is at such an advanced stage and the developers already have 50% of their funding in place,” he said.

“This project being at a standstill is costing the city at least £5m a year, blocking completion of the seafront regeneration and preventing lots of other spin-off business taking place nearby.

“By making a loan, we end those problems, boost public coffers by renting out nearby seafront arches, collect more in business rates, radically smarten the seafront and create hundreds of jobs.”

David Marks of Marks Barfield said the project stalled as a result of the reluctance of banks to lend in current market conditions.

“We are not looking for a subsidy or a grant, and we will not put any burden on the tax payer,” he said.

“Brighton i360 will be a family-oriented, sustainable tourist attraction and much more, as it will fundamentally help underpin the business economy of Brighton and Hove and strengthen its international profile.”

Brighton & Hove said that if there was a default on its loan, the council could take over the site, the business or its assets.