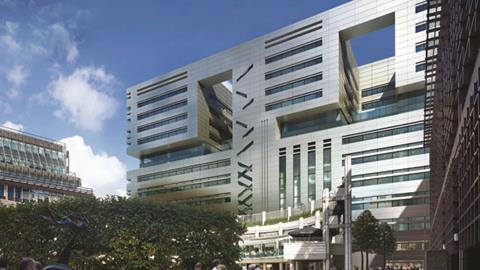 Planning permission has been granted for British Land and Make Architects’ controversial proposals to redevelop 5 Broadgate in the City of London. The 12-storey, 1.1 million ft2 office block replaces 3, 4 and 6 Broadgate, which were designed by Peter Foggo/Arup in 1991 in the earliest phases of the iconic development. Despite the scheme being branded the “worst in the City for 20 years” by original Broadgate developer Stuart Lipton and also attracting criticism from Arup Associates’ founding partner Philip Dowson, only two objections were received during the planning consultation process.

The new building, jointly developed by the Blackstone Group, will be almost double the size of the original and will form new headquarters for Swiss Bank UBS with net floorspace of approximately 700,000ft2 (66,890m2).