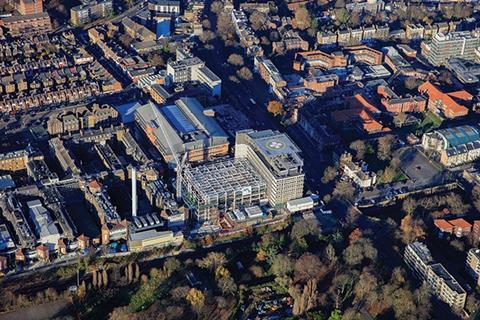 How do you fit a new ward block of 60 intensive care beds into a busy London hospital with no land available on which to build it? The answer at King’s College Hospital, London, is to suspend the new King’s Critical Care Centre (KCCC) over the top of the hospital’s existing two-storey operating theatre block from a series of giant trusses.

Construction of the £35m centre is now under way. In the narrow gap between the theatre block and the adjacent hospital buildings, which is less than 2m in some places, main contractor McLaughlin & Harvey has succeeded in threading in rows of 20m high white-steel columns around the perimeter of the existing theatre block. “The weight of the new building was too heavy to be supported by the existing building so it has to be supported by an independent structure,” explains Matthew Ellams, director of Watts Group, project manager for the scheme. 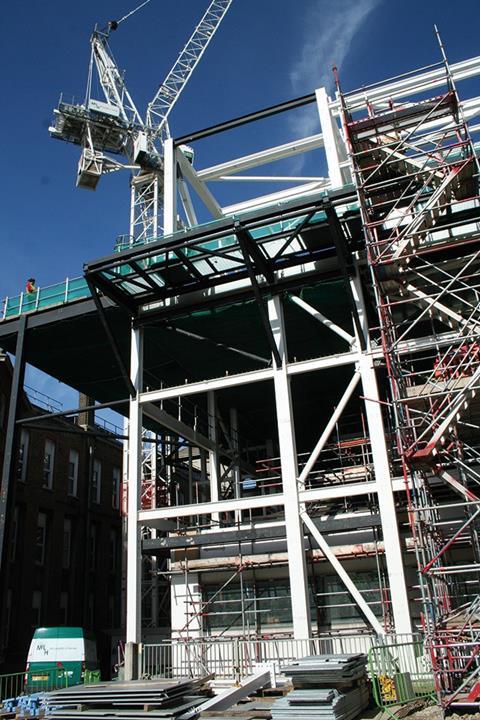 The 35 columns stand on 288, 450mm diameter piles. A crowded site and a multitude of buried services meant that it has taken two years and 15 separate enabling projects, including the relocation of high voltage transformers, a low voltage switch-room and demolition of a tunnel, to clear the ground around the perimeter of the operating theatre block to enable the piles to be bored. “A colossal amount of site investigation work had to be carried out prior to the works,” recalls Ellams.

To keep vibrations to a minimum the piles have been eased into the ground metres from the neurosurgery theatres and MRI scanners using an auger-based rig. Acoustic and vibration sensors installed in the theatre block monitor the situation. However, despite having to pile so close to live operating theatres, Ellams says the works were stopped on just three occasions “due to the criticality of operations in the theatres”.

The columns now support all eight trusses that will eventually carry the 900 tonne weight of the three-storey KCCC over the operating theatre block. The giant 40m long, 8m high trusses dwarf the block beneath, their white-painted steel in stark contrast to the weathered grey of the block’s tiled roof. 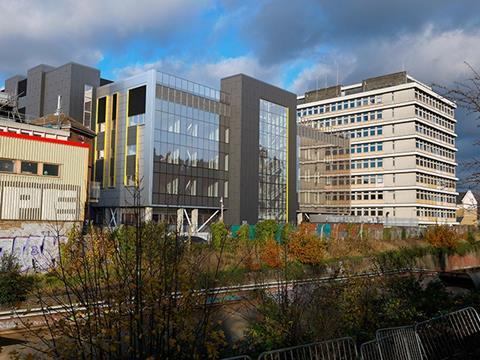 At the western end of this structure is the site’s solitary tower crane. Adjacent to it, 20m above the ground, is a temporary logistics platform; its black steel differentiates it from the white steel of the permanent structure. The platform is where the crane places the individual steel sections that are bolted together to form the trusses.

Abutting the logistics platform, but about 2m lower in height, is the assembly deck. It is here that steelwork contractor Severfield’s team assembled the KCCC trusses and attached them to the part-complete truss structure.

What is unusual about this project is that the entire truss assembly is held above the support frame on a series of jacks. The jacks, which are mounted on low friction PTFE pads, are positioned on rails running the length of the support frame on both sides of the assembly.

The really innovative aspect of the project happens on completion of each truss section. At this point the jacks raise the entire truss assembly up 60mm. The truss assembly is then pulled by cables attached to two ram jacks mounted above the rails at the eastern end of the supporting structure, which is then slowly pulled along on the rails. 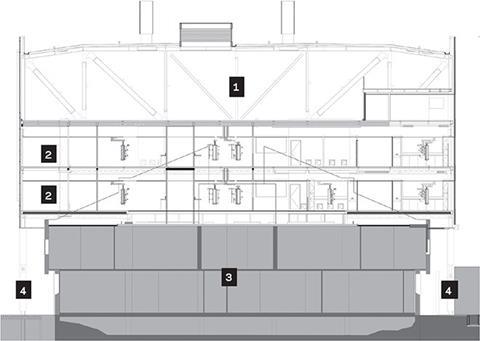 The powerful jacks inch the truss structure out from the assembly deck and over the top of the operating theatre block. The slide is halted at 1m intervals to allow the team to check the structure is moving as planned. Once the truss assembly has moved a total of 6.6m, the distance by which the most recently assembled truss will have cleared the assembly deck, the slide is halted and the next truss assembled and the procedure repeated.

This ingenious solution has the advantage in that it ensures steelwork does not have to be lifted over the live theatres. More importantly, the procedure is so slick that the launch can take place without interrupting the surgeons working in the theatres below.

The technique is similar to that used to launch a bridge, except that in this case the structure, which will weigh over 550 tonnes by the time of the final slide, is being pulled as opposed to pushed. “When we did the first slide we were all on tenterhooks, it was a monumental feat after five years in the planning,” says Watts Group’s Ellams.

As the project has progressed the team has become more adept at using the launch solution. The first slide took several hours to complete; subsequent slides have been achieved in around 30 minutes. With the final side completed the structure was bolted into position and the jacks removed. 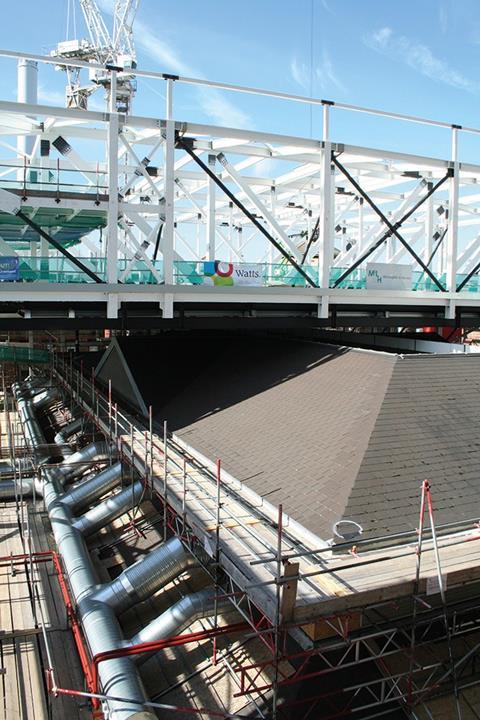 At the same time as Severfield’s team assembled the trusses, they installed the profiled metal sheets to the underside of the trusses. These form the base of the reinforced concrete floor of the KCCC’s truss-level plantroom. Installing the profiled sheets early in the programme, and as part of the steel frame, meant that the floor was in place before the structure was launched over the existing building. This eliminates the need for the crane to lift over the operating theatres and it has the additional advantage of providing weather protection to the operating theatre block below. With the sheeting in place, the block’s roof can be removed to allow the KCCC’s upper floor to go ahead.

In advance of the roof’s removal the operating theatres’ extract ventilation plant and three air-cooled heat rejection units have already been temporarily relocated from the roof void.

The plan is that at the same time as the theatre block’s roof is being removed, the reinforced concrete floor of the new truss-level KCCC plantroom above will be cast. Completion of the floor slab will allow 32 jacks to positioned. The jacks are the key to the project’s second innovative structural manoeuvre: the lowering of the top KCCC floor (KCCC2) into position.

The KCCC2 floor has been designed to occupy the space that is currently inhabited by the operating theatre block’s roof and plant. Even though the roof is still in place the KCCC2 floor structure is being assembled by Severfield’s team while they are assembling the truss-structure. Because the steel erectors cannot assemble the floor in-situ, they are assembling it temporarily bolted to the underside of the truss-structure. “We’re building the KCCC2 floor beneath the KCCC plantroom floor because part of the space that it will occupy above the operating theatre block is still in use,” says Ellams. 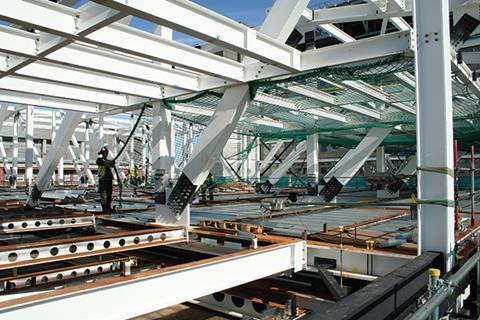 While the truss-structure is being launched, the KCCC2 floor is held in place beneath it by a series of bolts. These have been painted bright red as warning to the steel erectors not to touch them. Once the launch has been completed and the operating theatre block’s roof removed, the red bolts will be undone to allow the jacks to lower the entire 38m x 60m floor structure down 3m until it is suspended midway between the supporting trusses and the ceiling of the operating theatres below. Steelwork will then be bolted into place to support the new floor structure beneath the trusses.

With its floor in place, fit out of the KCCC2 floor can commence. At the same time, mechanical and electrical plant to serve both the new KCCC and the operating theatres below will be installed on the plant floor above. When all of the large plant has been craned into position the plantroom roof will be installed along with the exterior cladding and curtain wall. Finally, the operating theatres will be disconnected from their existing plant and reconnected to new plant in the KCCC plant room.

The change-over of operating theatre plant will take place two at a time. Once each pair of theatres and their shared anaesthetic room have been reconnected, the rooms are subjected to what Ellams calls a “plates test” to check the theatres are clinically clean before being put back into use. “It takes a week to get the results for each test, which we had to build into the programme,” he says.

The final stage of this phase of the project is to construct the lower floor of the KCCC unit, KCCC1. This is accomplished by demolishing the old theatre block top-floor plantroom to turn it into the lower floor of the KCCC. Because the base of the overhanging KCCC structure extends 2.4m beyond the perimeter of the operating theatre block, steel beams will be installed to bridge the annulus and allow the floor to be constructed. Only then can fit-out of the centre’s lower floor commence. That, though, is many months down the line. Until then the project team have plenty of challenges with which to occupy themselves.