Poplar Baths in London’s East End is a historic example of state architecture used to improve public health. But to preserve this listed building, the project team had to demolish part of it and rebuild through a PFI agreement 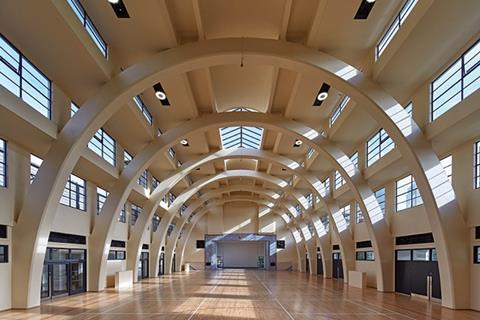 The former main pool hall has been restored into a soaring, multi-purpose space

The obvious principle of conservation is to conserve as much historic fabric as possible. It comes as a surprise therefore to come across a major refurbishment project of a locally loved grade II-listed building where English Heritage permitted half of the building to be demolished. Demolition is rarely seen as the most sustainable redevelopment option but this was identified as the only strategy that could deliver the wholesale renovation so desperately needed at Poplar Baths in London’s East End, a building that had stood empty for almost 30 years.

Additionally, with the austerity-addled local authority unable or unwilling to pay for the project entirely, it was financed by a public private partnership that was similar to a conventional PFI model in every sense except there was no reliance on central government funding. According to project manager Patrick Quinlan, this was the only way to secure the funding required for the renovation. While such a route may lie at odds with the staunchly civic social and egalitarian principle on which British municipal public baths provision was conceived in the 19th and early 20th centuries, without it Quinlan believes that the renovation would have been economically impossible.

Therefore in terms of both finance and conservation, the renewal of Poplar Baths presents a series of alternative scenarios by which the sustainability and viability of disused but historically significant local landmarks can be restored.

Poplar Baths was built in 1934 in a combination of the art deco and free classical styles that came to be synonymous with British public buildings in the inter-war years. Located in London’s staunchly working class East End and designed, built, financed and managed entirely by municipal government, it was part of a wider national strategy to improve social conditions for those on low incomes by giving them access to the highest standards of public health and hygiene. Decades before the wellbeing methodologies that are fashionable today, the baths provide a fascinating historic example of architecture being actively used by the state to improve the social and physical welfare of the people. 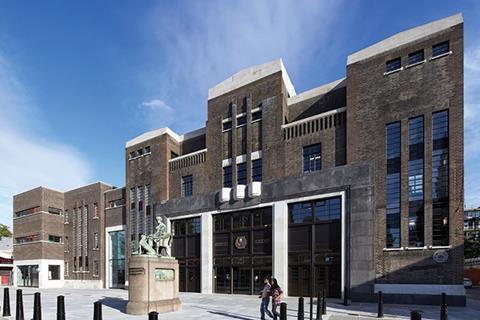 Accordingly, the baths were conceived on a palatial scale. The monumental, symmetrical brick exterior was adorned with stone dressings and the entrance foyer retained the richly decadent ocean liner styling that was also commonly used on the cinemas of the age. Most impressive of all was the second of the baths’ two pools, a spectacular arched vault that could ingeniously be covered and converted into a dance hall and cinema seating 1,400 people in the winter.

However, the post-war years saw both maintenance and use of the baths decline and they finally closed in 1986. Thus began the long slow fall into dereliction, a process only temporarily halted when the London Docklands Development Corporation requisitioned the building as a construction skills training centre for local apprentices working on nearby Canary Wharf in the 1990s. Ironically, this role, with its crude insertion of construction test sites and apparatus into the main fabric of the building, damaged the structure even more.

As the building deteriorated, demolition was considered but the building was saved when a local pressure group succeeded in having it listed in 2001. There is further irony in the fact that the building’s listing protected the very derelict fabric that the design team, led by Pringle Richard Sharratt, identified as an obstacle to renovation. They claim that it was only its partial demolition that unlocked the redevelopment vision that has now been realised. 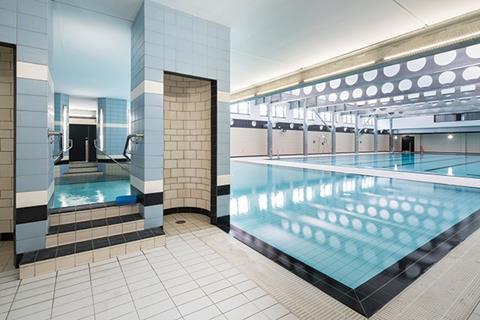 According to contractor Guildmore’s project manager Quinlan, who himself comes from an architectural conservation background, settling on the partial demolition solution proved to be one of the biggest practical and ethical challenges of the project.

“Conservation is instinctively about preserving historic fabric so we didn’t arrive at this strategy easily,” he says. “But the principle of conservation deficit weighs the cost of repairs against the end value of the building and we had to settle on a plan that ensured the highest end value possible. We did this by drawing up a conservation plan that rated the quality of the building’s assets into first and second class groups. It’s the second class elements that we earmarked for removal.”

Conveniently, the original building was essentially designed in two halves. The first and primary half contained the main arched pool behind the symmetrical brick frontage. The second was built alongside it and contained a smaller pool that stayed open throughout the winter when the main pool was in cinema or dance hall mode. It is this second half of the building that was identified as being less significant in heritage terms and has now been demolished.

The demolition was seen as critical to the renovation project because it meant a new modern pool could be constructed in place of the secondary wing alongside new leisure facilities while enabling the main arched pool to be retained as a permanent venue space. Additionally, the demolition was accompanied by an ingenious new sectional solution for the new building on which the project’s entire structural and functional viability was based. 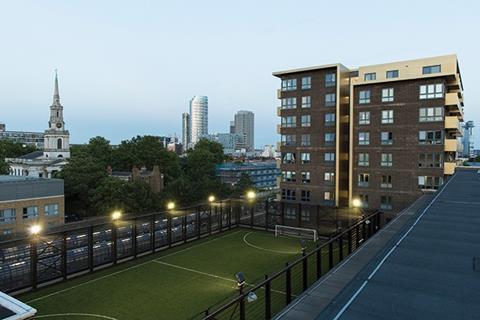 The original building was built on three levels, one of which was underground. In the primary wing, the main arched pool area was on first floor level allowing much of the ground floor to accommodate the pool basin. The secondary wing contained the smaller double-height pool at basement level with administrative offices above.

By eliminating the pool from the primary building, the ground floor area that previously accommodated the pool basin has now been allocated as a continuous plant level that serves the entire building, with the changing rooms retained and refurbished below. In place of the demolished block next door, the new pool occupies the lowest two levels while a new gym has been located above this. In a further ingenious twist, a rooftop football pitch has also been created to expand the venue’s leisure facilities.

Quinlan insists that none of this would have been possible had the secondary building not been demolished. Additionally, he maintains that the decision to build a new pool in what essentially amounts to a new building alongside the old one was a direct response to the structural problems the building originally presented.

“The old swimming pool itself was one of the biggest problems with the building prior to renovation. Swimming pools present a host of the type of agents that attack building fabric, such as corrosion, water, vapour and chlorine. Over the years, these had completely corroded the steelwork and fabric of this part of the building. Therefore it made sense to put the new swimming pool in a dedicated new-build component that is specifically designed to withstand and accommodate those kinds of contaminant.” 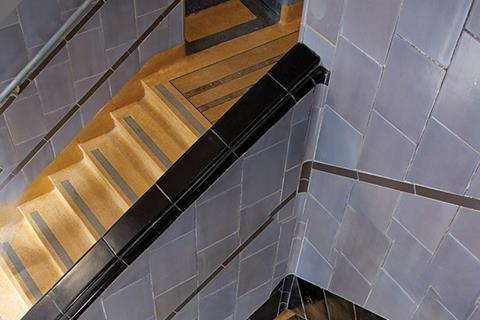 Ceramic tiling has been painstakingly restored

As well as the old pool, Quinlan identifies the building’s structural fabric as one of the principal challenges of the project. The building was built with a steel structural frame within a brick envelope. But, with no cavity between the steel and brickwork, moisture in the brickwork attacked the steel and caused severe localised corrosion.

The design response has been to remove brickwork in areas where the steel is most corroded, clean the steelwork and apply new cathodic protective treatment to it before it is resealed with brickwork. Cathodic protection essentially runs a current through the steelwork, diverting any corrosion to a dedicated sacrificial cell and keeping it away from the structural frame. It is a solution that has been extensively used at other steel-framed heritage sites, most notably on London’s Regent Street.

The other, more cosmetic, elements of the project have involved the painstaking restoration of ceramic tiling and terrazzo floor finishes and the installation of over 170 new Crittall windows to match the 1930s originals. The entrance foyer has been expanded to meet modern standards and its sparkling Vitrolite panels, the opaque, pigmented and commonly curving glass so responsible for art deco’s jazzy, ocean liner feel, have been meticulously restored.

Externally, brickwork and stone dressings have been repaired and restored and the brickwork and elevational treatment applied to the new wing matches its demolished predecessor as closely as possible. Quinlan also reveals that original features of particularly historic or decorative interest that have not as yet been redeployed in the new scheme have been carefully stored in a new “heritage room” inside the building. 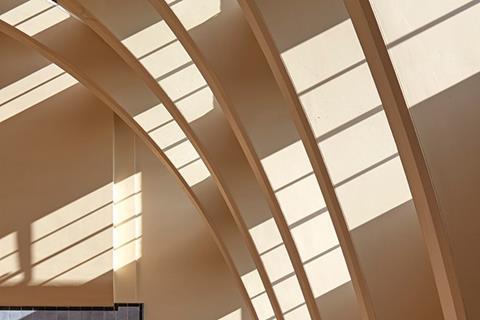 Poplar Baths proves that genuine sustainability is not just an environmental undertaking but a civic and financial one too. As socialist politics attempts to re-enter the national scene, there are many who balk at the principle of PFI and yearn for the days when it was the public sector that autonomously took the lead in social welfare, as was the case when Poplar Baths was built.

But Quinlan not only insists that the PFI model was the only way to finance the refurbishment and give an essential new lease of life to a derelict building but he also points out that the 35-year maintenance and operation contract the contractor has now undertaken as a result of it meant that even greater care and attention was paid to quality and workmanship during the renovation, thereby ensuring the building has an even more sustainable future.

Equally, while the demolition of half of a listed building may raise protectionist eyebrows, if, as many believe, the core principle of conservation is securing a viable use, then rigorously evaluated partial demolition can sometimes be a means of achieving sustainability too.