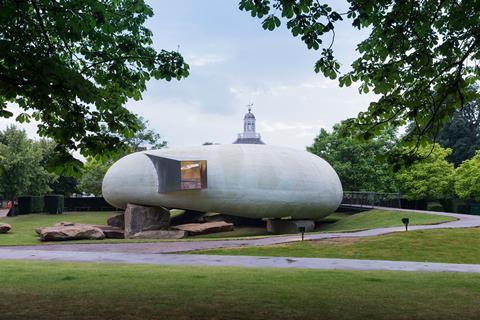 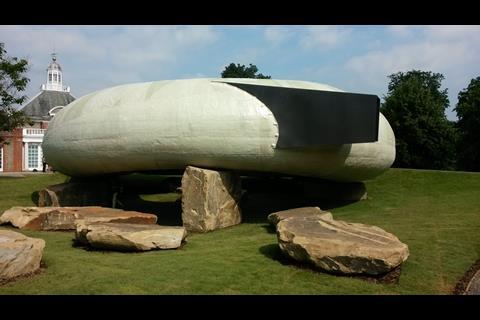 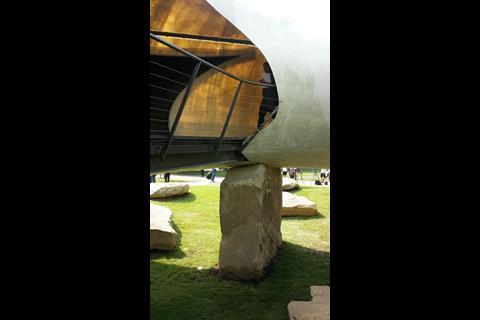 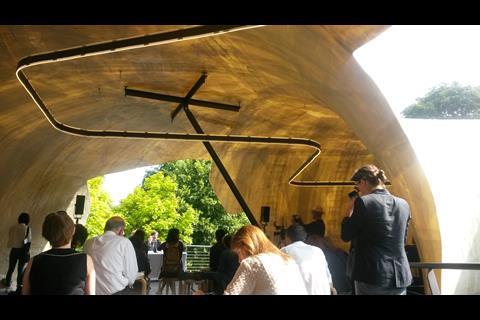 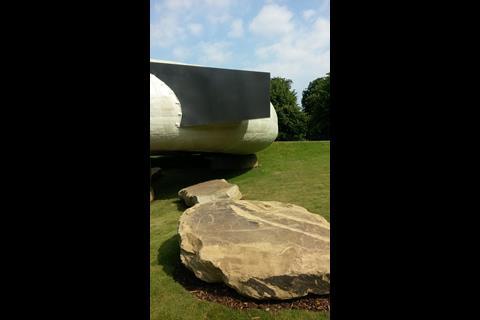 In the age of 4D and 5D digital visualisations, thankfully some architects are still obsessed with the ancient art of physical model-making. Should they wish, architects and designers like Peter Zumthor and Thomas Heatherwick could summon Soane Museum-esque vaults of models and maquettes and Frank Gehry is famously able to craft the most futuristic architectural forms from infinite iterations of one of this most traditional physical design processes.

Chilean architect Smiljan Radić confirms as much when he announces his general approach to architecture and that which informed his work on this year’s pavilion: “I don’t create forms, I collect shapes.”

Consequently, this year’s pavilion offers one of the most esoteric examples yet of a coveted architectural programme, now in its 14th year, famed for its avant garde experimentalism. On first impressions, particularly from afar, the pavilion appears to resemble a giant, prehistoric boulder teetering precariously on rune-like stones, all of which nestle with splendid incongruity, as all Serpentine Pavilions do, amid the verdant green landscape of Kensington Gardens, Hyde Park and the prim classical contours of the Serpentine Gallery right next door.

Closer inspection reveals otherwise. The boulder is actually a hollow, translucent, fibre-glass circular tube containing a raised timber-decked interior space which offers, by means of large openings sliced into the envelope and at one stage an enigmatically projecting square portal, luscious views out towards the park.

Visitors are also able to wander within the submerged undercroft beneath the pavilion, contemplating at close range the 120 tonnes of rock that support it and looking upwards into the hollowed opening in the middle of the fibre-glass ring above.

When you look at a folly you have to stop rationalising. Don’t think too much, just accept it. It’s about being alone with your environment; it’s a very personal relationship

Radić speaks of his determination to create an object that retains the “strength and crudity” of the “masking tape and papier-mache models” from which the pavilion’s bulbous form was derived. This is very much in evidence in the fibre-glass envelope of the pavilion whose haphazard joints and junctions erupt in bright sunlight into a diffuse patina every bit as intricate as veins across human skin.

But “strength and crudity” is not the only contrast on show here. Architects adore juxtaposition and history shows that those commissioned to produce Serpentine Pavilions, from Nouvel’s “red vs green” to Zumthor’s “open parkland vs secret garden”, are particularly susceptible to the “lure of the opposite”.

Radić proves to be no different and his pavilion is charged with all manner of similarly playful tensions. Opacity vs transparency, solid vs light, strong vs fragile and inside vs outside are just some of preoccupations addressed in this year’s commission.

But, like model-making, the most intriguing of these clashes is centred on a far more traditional architectural idea, the folly. To an extent, all Serpentine Pavilions, with their temporary lifespans and flamboyantly contrived concepts, are follies. Historically, this has always been an appropriate response to what is essentially an 18th century English park context forged by a Picturesque Movement that idolised the folly.

But Radić embellishes his pavilion’s folly credentials by claiming that it is partially inspired by The Selfish Giant, Oscar Wilde’s haunting paean to the redemptive power of a garden landscape that ultimately promotes love and understanding.

Moreover, Radić also reveals himself to be particularly enthralled by the romantic, transformative power of follies to generate atmosphere and change our relationship with our surroundings and ourselves. “When you look at a folly you have to stop rationalising. Don’t think too much, just accept it. It’s about being alone with your environment; it’s a very personal relationship.”

Whether all who visit the pavilion this summer will be struck by such a reckoning is open to question. What isn’t is that they will invariably encounter one of the most whimsical and enigmatic creations the Serpentine Pavilion programme has ever commissioned.

The pavilion is open from tomorrow until October 19